For the last few decades, we’ve all become familiar with the “Nutrition Facts” box that appears on the back of packaged food. But when you’re walking around the grocery store, you don’t see many people stopping to look it over. Arguably, it hasn’t really kept up with the times. But, it’s important. Encouraging people to think about what’s inside the food they’re buying can have a significant effect on what they buy and eat. One recent study suggests that people who read a nutrition label are less likely to be obese. Correlation? Causation? A bit of both? It’s hard to say, but information has a role to play.

There’s also something critically important about how that information is displayed to us, in terms of whether we take action. So breaking out of the box for a moment, what does the nutrition label of tomorrow look like? And how can it be designed to better communicate information to shoppers without getting bogged down in categories and percentages? What’s a clearer way to communicate the healthiness, or unhealthiness, of something on the shelf?

A recent op-ed in the New York Times lays out one clever proposal. Mark Bittman, working with Werner Design Werks, puts forward the idea that “every packaged food label [should] feature a color-coded bar with a 15-point scale,” he writes. Zero to five would be red, six to ten would be yellow and eleven to fifteen would be green, letting you know how healthy or not the food you’re buying is. The scale would be made up of three numbers: (1) Nutrition, (2) “Foodness,” where fresh organic broccoli is probably about a 14 and frozen broccoli “is a four,” and (3) Welfare, basically the treatment of “workers, animals and the Earth.” 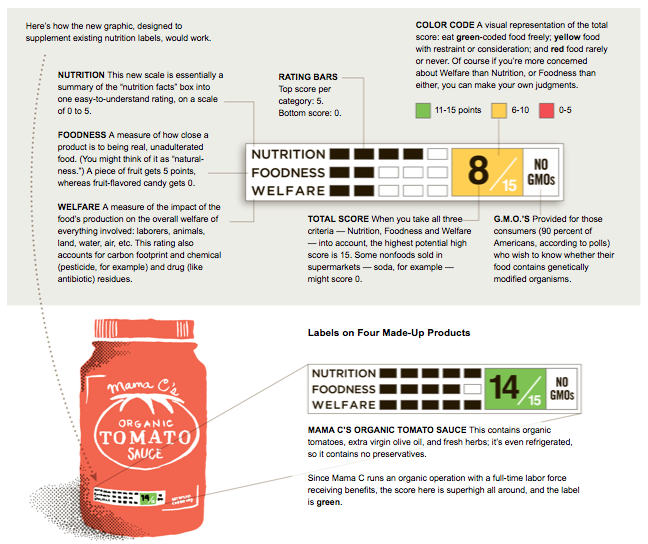 This is one way that the physical labels could be changed. There are also a number of new initiatives or startups that are addressing this issue through the power of smartphones. For instance, Fooducate is a mobile app that gives consumers access to more complete nutrition and product information. Guiding Star uses the data on the nutrition label to give smartphone users a one to three star rating for how healthy that food is. Another company with a slightly different approach is Massive Health. It is focused more on restaurant dining (you snap a photo of your food and rate it on a healthiness scale, which, combined with the ratings of others, gives you a sense of how well you’re eating) but could apply the same logic to packaged goods.

The list goes on, and includes the likes of Nutritionix, GoScan, Shopwell, Nutrition Rank and NxtNutrio, all services that make it easier for (mostly smartphone) users to find out more information the food they’re buying and whether it’s healthy. Whether physical, digital or both, there are exciting opportunities in this space, to improve transparency and health and produce the nutrition label of tomorrow.