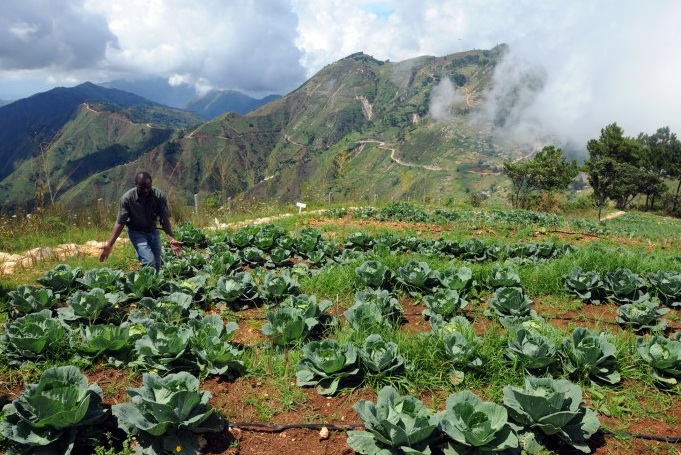 John Atis and his cabbage from USAID

The U.S. Agency for International Development, also known as USAID, is celebrating 50 years as an organization. And after so many years of focusing on agriculture and the task of feeding growing populations, the organization clearly has much data and knowledge to share.

Sadly, that wisdom is not conveyed well in their latest infographic, The Global State of Agriculture.

The visual discusses one reason the world needs better agricultural yields (a growing population), and a place where investment could focus (women).  It uses  many oft-mentioned statics (the population is growing, food production “must” increase), while highlighting the inequity of resources for women in farming.

But the infographic has also simplified reality to the point where the facts feel disjointed and unrelated.  Why does a growing population mean we need to produce 100% more beef?  If 40% of the animals are owned by men, how are only 10% owned by women?  And how does a 4% increase in “crops” come close to the 42% increase needed?

Mandated in 1961 by President John F Kennedy as a way to centralize development projects within the U.S. government, USAID “today brings together the technology, resources and global imperative to meet the challenges of improving lives around the world.”

Along with a series of events held world wide last November, the group has created a new website for their anniversary, highlighting interviews with USAID staff, videos about their work around the world, photo essays, and several infographics outlining the organization’s work.

About the Author
Beth Hoffman has reported on food and agriculture for ten years, airing on NPR, The World, Latino USA, Living on Earth, KUER and KALW , and studied the food system in depth as a fellow and co-lecturer in the Africa Reporting Project at UC Berkeley’s School of Journalism. Hoffman competed a year long documentary project cooking with immigrant women in their homes, has traveled to India, Uganda and Ethiopia to report on rice production and chicken farming, and did a multipart series for KUER on the artistic, cultural and environmental connections we have to food. In addition to spending many hours on-farm in Utah, California and abroad, Hoffman also married into an Iowa farm family and is currently working with her husband to slowly convert the land into a sustainable orchard and hog farm. She currently lives in Albany, California. Hoffman’s previous work can be found on her website at bethaudio.com.
Previous Next
anniversary, infographics, John F Kennedy, population increase, U.S. government, USAID, women in farming