The USAID recently held a hackathon focused on improving food security in developing nations. Many of the projects look to have great potential. They exhibit innovative uses of open data, technology and mapping in order to provide services like crop growing advice, nutrition risk information and insights into land grabbing.

Pinapple Project and Grower’s Nation are two projects worked on during the hackathon that aim to make decisions about planting crops easier. The goal of Pinapple Project, for instance, is to allow users to “find your optimal crops according [to] your location, climate and soil data.” The tool isn’t completely functional yet but asks for latitude, longitude, elevation, soil PH and annual rainfall in order to triangulate the optimal crops. 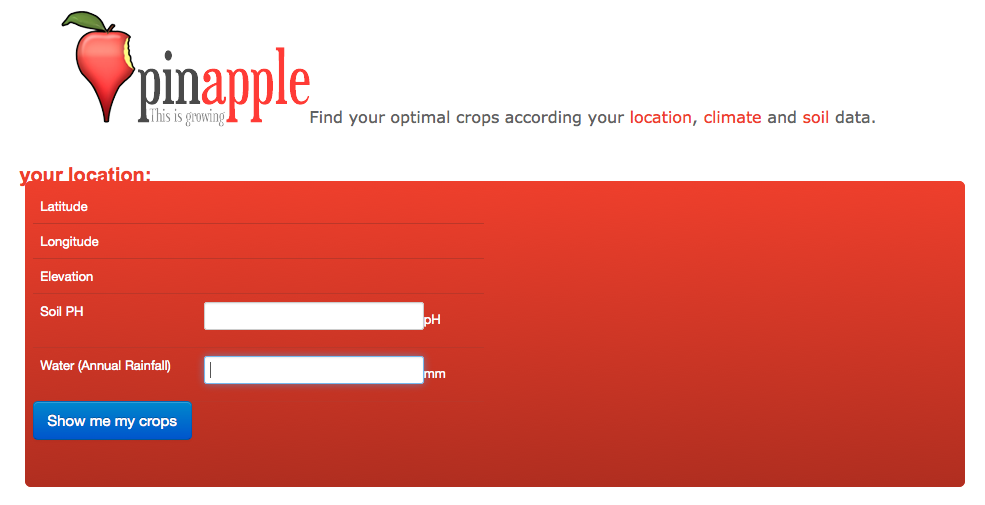 Another sponsor and participant, Palantir, addressed a set of similar issues by mashing together data sets supplied by Grameen. The Grameen Foundation employs farmers in rural areas to go out, with a smartphone, and collect data from other farmers (on demographics, crops, etc.). In one example, Palantir combined this data with 28,000 soil samples from Uganda to help plot the PH balance of soil and identify ideal locations for planting, say, cassava versus soy beans. In another example, Palantir used Grameen data on crop blights to generate a heat map that “Gives [you] some sense of where maggots and soy beans are colliding, and where the maggots are winning,” says Ari Gesher of Palantir Labs in this video about the project.

Other projects worked on during the hackathon include Sonjara, a mobile app that helps subsistence farmers identify how much they need to produce in order to satisfy their families’ nutritional needs. Another, the Geo-Wiki Project, combines Google Earth data with crowdsourced information to identify land grabs. For purposes of the hackathon, they focused on Ethiopia, which they identify as one of the top ten countries where land grabbing occurs and for which current data is hard to come by.

USAID encourages following up with any of the teams to find out more. Several of the projects will be presented at the Iowa Hunger Summit on October 16.