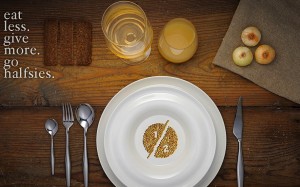 You have likely heard the paradox: 40 percent of food produced in the U.S. is thrown away (enough food trash to fill the Rose Bowl every day), yet it’s now estimated that one in seven people in the world does not have enough to eat (1 billion people).  Add to that the fact that 66 percent Americans are overweight from eating increasingly large portion sizes, and you have a dysfunctional feedback loop of waste, hunger and obesity.

Halfsies is a new project designed to help reconfigure this system, giving restaurant diners the option of eating half a portion size – thus creating less waste and fat – and donating a portion of the plate’s cost to charity.  While still in the initial stages, the idea is that restaurants will easily be able to offer “halfsies” on the menu, keying information in their POS system to track donations.

Sydney Berry Ling, Co-Founder and Communications Director explains.  “What makes Halfsies unique is the 3-fold impact of a customer choosing to “Go Halfsies,” which provides a healthier meal portion, reduces food waste and supports the fight against hunger.  It’s a win-win-win.  Plus, it is an ongoing choice, not just something available one day or a week out of the year.  It is sustainable.”

But thus far, getting time with busy restaurant owners to sell them on the idea has been a challenge and the group is still looking for funding. To learn more about the project and how to be involved download their pamphlet and watch the video below.

About the Author
Beth Hoffman has reported on food and agriculture for ten years, airing on NPR, The World, Latino USA, Living on Earth, KUER and KALW , and studied the food system in depth as a fellow and co-lecturer in the Africa Reporting Project at UC Berkeley’s School of Journalism. Hoffman competed a year long documentary project cooking with immigrant women in their homes, has traveled to India, Uganda and Ethiopia to report on rice production and chicken farming, and did a multipart series for KUER on the artistic, cultural and environmental connections we have to food. In addition to spending many hours on-farm in Utah, California and abroad, Hoffman also married into an Iowa farm family and is currently working with her husband to slowly convert the land into a sustainable orchard and hog farm. She currently lives in Albany, California. Hoffman’s previous work can be found on her website at bethaudio.com.
Previous Next
American Diet, go halfsies, Halfsies, hunger, obesity, portion size, video, vimeo