Infographic[s] of the Week: Hunger in the Horn of Africa Visualized

No less than nine visualizations have hit the virtual airwaves in the past few months looking at the crisis in the Horn of Africa, each taking a slightly different approach to hunger in the region.  Depicting everything from the 80% decrease of rainfall in the region to the amount of aid (or lack thereof) received globally, NGOs and the media alike are beginning to use slightly fewer photos of malnourished children in favor of more visualizations to tell complex stories.

Which is a great lesson for those of us interested in relating the dry and often convoluted reality of many topics (like the Farm Bill) to a wider audience.   The data behind the scenes often makes a great story.

This kind of storytelling might also be getting much easier as groups like the World Bank become more interested in releasing data to help the process.

With so many visuals to pick from on the Horn of Africa, there was steep competition for the Infographic of the Week.  But three clear winners emerged. 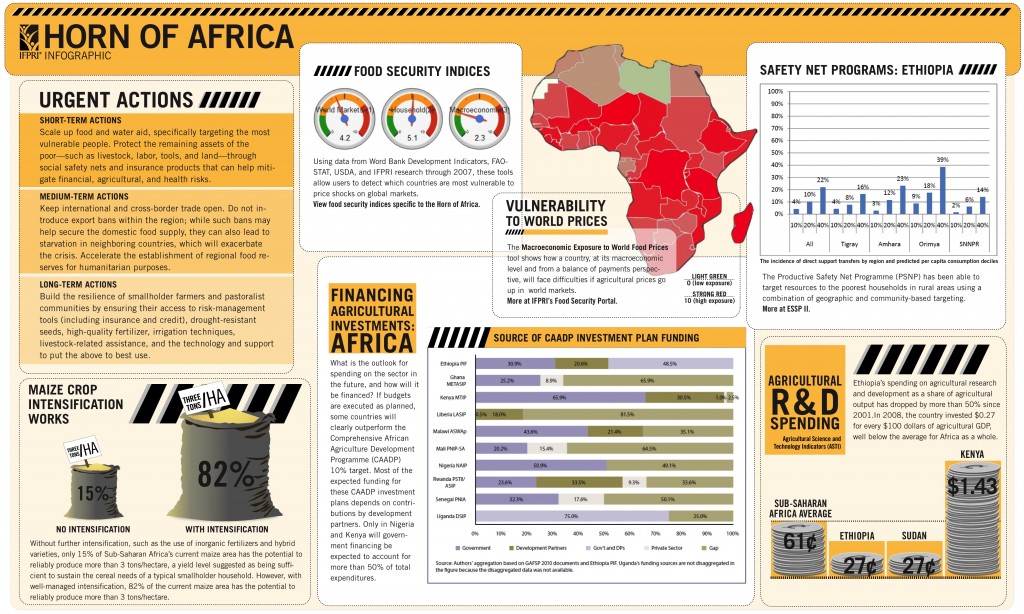 The first goes to the International Food Policy Research Institute’s (IFPRI) Horn of Africa Infographic.  While perhaps not the easiest to understand, nor the most visually appealing, IFRPI did not shy away from trying to share very complicated information.  The infographic itself is interactive, with each segment of the page linked to a different partner organization, research paper or further break down of the (very complicated) info.

The Guardian on the other hand, went for a completely different style of infographic. The graphic is an elegant relief map with moving arrows (which, though cool, are unlabeled), but very little in the way of complex information.  The picture sums up the situation clearly if simply – the whole Horn of Africa is stressed for food, and certain areas are in extreme crisis. 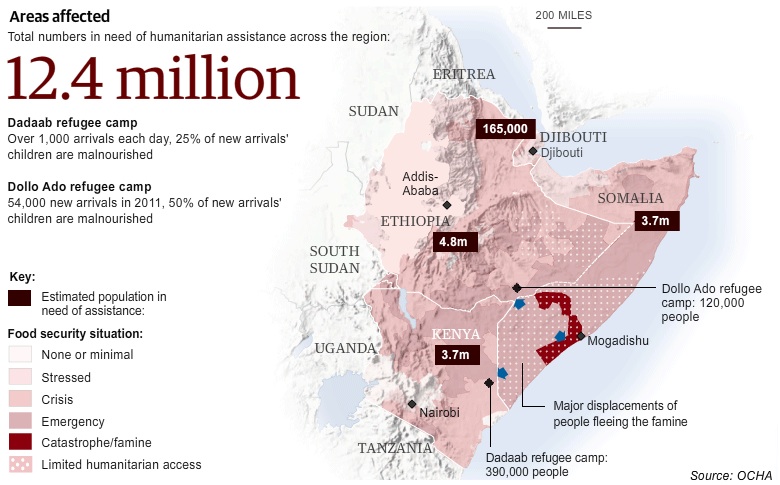 Last, but not least, is the infographic created by eLocal and the Washington Post.  Here information from 20 sources is compiled into an easy to read, but still complex graphic, showing everything from a time line of events in Somalia to the increase of famine-related measles cases last year (660%).  A beautiful use of color too, although if one did not know what the map of Somalia looked like, it is a bit subtle.

About the Author
Beth Hoffman has reported on food and agriculture for ten years, airing on NPR, The World, Latino USA, Living on Earth, KUER and KALW , and studied the food system in depth as a fellow and co-lecturer in the Africa Reporting Project at UC Berkeley’s School of Journalism. Hoffman competed a year long documentary project cooking with immigrant women in their homes, has traveled to India, Uganda and Ethiopia to report on rice production and chicken farming, and did a multipart series for KUER on the artistic, cultural and environmental connections we have to food. In addition to spending many hours on-farm in Utah, California and abroad, Hoffman also married into an Iowa farm family and is currently working with her husband to slowly convert the land into a sustainable orchard and hog farm. She currently lives in Albany, California. Hoffman’s previous work can be found on her website at bethaudio.com.
Previous Next