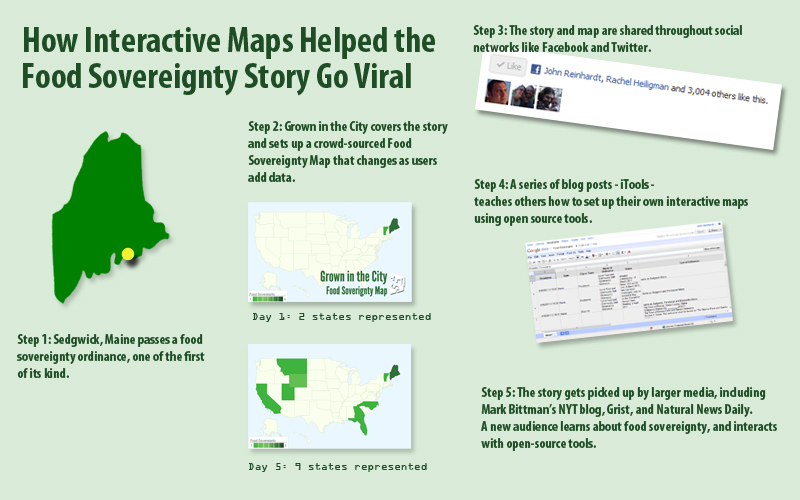 This year we witnessed first hand the power of open source tools to quickly spread the word about food system policy and planning.  When Sedgwick, Maine passed the first food sovereignty ordinance, Grown in the City created a map so that others could track this trend and see the start of a growing movement.  We were surprised at how quickly the story spread, revealing the power of online tools to share knowledge in ways that delight users and inspire others to take action.  The “food” crowd is definitely ready for more interaction with the “tech” crowd in the years to come.

John Reinhardt is an urban planner, writer, photographer, and urban gardener.   John works at IBM as the Program Manager for City Forward, a free, web-based platform that enables users – city officials, researchers, academics and interested citizens world-wide – to view and interact with city data while engaging in an ongoing public dialogue.  John previously served as a Program Manager for International Programs at the American Planning Association, where he ran the Energy and Climate Partnership of the Americas urban planning initiative and Delta Urbanism Programs.  He is a member of the American Institute of Certified Planners and currently resides in Washington DC.

Bob Wall is a software engineer, videographer, and artist. He holds an undergraduate degree in Computer Science from the Shippensburg Univeristy. He currently lives in San Francisco, CA where he enjoys playing raquetball, running, and tennis. His artisitic work can be seen at his website ohSanFran.com which he created as an artisitc outlet for him and some fellow artists when he moved out to California. Some of his work, including a Swings Happiness Project, has been picked up by the Wooster Collective, urlesque, and the Prince of Petworth, and he was invited to give a speech at a TEDx event for the project. As a contributor to Grown In The City, he is most interested in sharing his knowledge about the intersection of Urban Agriculture with Computer Technology.