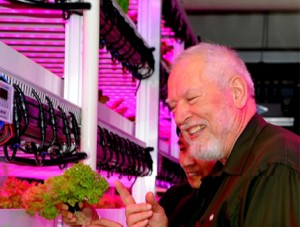 The construction of the world’s first vertical farms have amply demonstrated to even the most outspoken critics that indoor farming in tall buildings is not only feasible but entirely doable. A fifth VF in Seattle, a modest two story facility operated by Cevsca, Inc., opened in June, 2011. Vertical farming has now moved from the “crazy idea” stage, to conceptualization, to construction of functional prototypes in just eleven short years. In the next few years, I suspect all major cities around the world will witness an explosion of new versions of VFs, all taking advantage of high tech solutions to lighting, nutrient composition and delivery, planting and harvesting, etc., as well as the maturation of hydroponics and aeroponics systems. As the vision for urban agriculture crystallizes over the next ten years or so, the kinds of crops that can be grown indoors commercially will expand to satisfy a global consumer public demanding safer, more reliable food. Fish, shrimp, mollusks, and poultry will round out the vertical farm ‘menu’, enabling many world cuisines to flourish, regardless of geography or the time of year.

While vertical farms will eventually be able to supply much of the produce for urban centers on demand and at a reasonable cost, the concept does not address the issue of food for those who need it most and cannot afford to shop at Whole Foods, for example. In other words, how will everyone who needs to benefit from this new agricultural strategy be served, if vertical farms need to show a profit at the end of the day? Governments have been the lowest common denominator with respect to basic rights and privileges of their citizenry.

The Republic of Korea sees the vertical farm as a transformative principle, whose end point is to allow all Koreans access to a healthy diet at affordable cost, because the government is the one that initiated the research and development of vertical farming in that region of the world. Korea is ranked ninth in the world economically, and is also one of the most technologically gifted countries, creating the perfect womb for the gestation and birth of vertical farming. Many other countries see the role of government in much the same way (e.g., all of the Scandinavian countries, Holland, Denmark, Germany, Kuwait, Canada), while many others allow economics to sort out who gets and who does not. Others cannot afford to extend social services to ensuring a constant food supply, due to low GDPs. Finally, many countries are politically unstable and remain in a state of chaos.

We all agree that the world would be a much better place if everyone were well-fed and enjoyed a safe and abundant drinking water supply. Vertical farming has the potential to bring that about, but it will need a lot of help from the enabling countries (G12). The rewards for doing so will be felt almost immediately. As the nutritional status of everyone rises above the poverty level, time spent in school will double, eliminating the single most important cause of poverty: illiteracy. So, who needs vertical farms? We all do.

Dickson Despommier is a microbiologist, ecologist and Professor of Public Health in Environmental Health Sciences at Columbia University. He conducts research on intracellular parasitism and teaches courses on Parasitic Diseases, Medical Ecology and Ecology. In recent years, Despommier has received considerable media coverage for his ideas on vertical farming.[1][2] He developed his concept of vertical farming with graduate students in a medical ecology class in 1999.