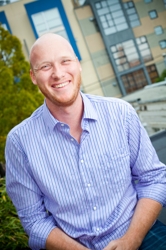 As a committed foodie who comes from a family of super committed foodies, I’ve been dying to write something about how technology is about to change the way the food industry works ever since I started Zaarly.

When it comes to food, almost every great breakthrough in science or technology over the past 150 years has been on the side of more scalable, more centralized, and more industrialized. This, after all, is one of the key levers that makes technology great—the ability to build things bigger, faster, cheaper and make them more accessible and affordable to more people.

In the world of electronics this is awesome; I love my one-inch thick flat screen TV and my mindblowingly powerful smart phone. However, in the world of food this trend towards bigger, faster, more scalable, and more centralized has turned out to have some seriously negative consequences.

While the average American’s percent of income spent on food has plummeted from close to 20% in 1960 to 10% today, the costs associated with that drop have extended well beyond what many of us are comfortable with. Without getting into any particulars or a politically charged conversation, everything from the humane treatment of animals to an obesity epidemic to environmental concerns can legitimately be discussed as costs of our technologically-charged, industrialized food system.

For that very reason, the 1960’s ushered in a small but continually growing movement towards local, distributed, natural, organic and community food supply chains. In many ways the birth of this movement was inherently non-technological. In fact, I think it would be fair to say that much of the local foods movement has been anti-technology from it’s birth, and understandably so.

That is not to say that everyone who is into sustainable farming or eating local is a technophobe. It is however to point out that a good case could be made that as previous technological progress and industrialization moved hand-in-hand, the food supply chain became more and more machine-like. And it’s hotly contested whether or not the benefits were worth the cost, both real and intangible.

Ok, so what I’m really supposed to be writing about is how today’s technology can have a very different impact on the world of food. But what’s really different this time?

The difference is that today our technological progress is more focused on the flow on information as opposed to goods. It’s not about moving hard goods faster or centralizing operations for the sake of efficiency; it’s about sharing information faster and allowing even highly distributed people and sets of activities to work together efficiently. In one of my all-time favorite insights the author Michael Lewis said, “By its nature the Internet undermined anyone whose status depended on a privileged access to information.” While this is becoming increasingly true in many fields, it is finally becoming a reality in the food industry.

This move towards transparency allows an entirely new type of empowered buyer. Companies are springing up all over to the place to facilitate this transition. As a simple starting point, if you’re curious about where the food in your pantry came from, today you can probably find out with a great deal of effort, but tomorrow it will be much easier thanks to technology. As we’ve seen time and time again, transparency and education can be the seed for lasting change.

The company that I work at, Zaarly, was in no way started with the idea that we would be helpful for the informed and empowered food buyer, but almost immediately after launch we learned that our version of a local marketplace could greatly impact this segment of the economy. Without getting into too much of a pitch about Zaarly, we let people broadcast what they want and what they are willing to pay for it to their local community in real-time. You can literally ask for anything. At its core, we’re a platform for discovery, helping people find what they need from people close by and at the same time helping people on the other side of the transaction make money by selling things they already have or could do. While we’re just getting going, we’ve already seen people in cities around the country use Zaarly to buy their food locally from neighbors and local farmers… I love this use of Zaarly. In fact, the reason I was asked to write something here is that Zaarly helped source 20 lbs of beef cheeks from a local farm in New York for the anniversary event being run by the one and only Danielle Gould. 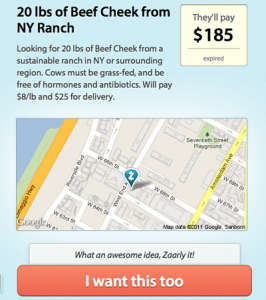 I promise you that was not what we had in mind when we started Zaarly, but we were super excited to see it happen.

Then, last week at TechCrunch Disrupt, I saw Farmigo, a company that has built an entire web-based platform around this concept. I don’t know the team there or how many other people are working on similar things, but it hits squarely on the idea of using information to change the food system. How often do you see something like this on TechCrunch?

My bet is that we’ll see this more often in the next few years, as technology increasingly fosters the transparency needed to empower buyers to be educated, eager participants in their local food systems.

Bo Fishback is the cofounder and CEO of Zaarly, a marketplace that allows you to buy and sell anything with people and companies nearby. If you’ve ever said, “I’d pay _____ for ____,” then Zaarly is for you. If you’ve ever said “I want money,” well… you’re welcome.

He was previously vice president of entrepreneurship for the Ewing Marion Kauffman Foundation and the president of Kauffman Labs for Enterprise Creation. His responsibilities included developing and advancing transformative programs that strengthened entrepreneurial engagement in the economy and helped entrepreneurs succeed. He is also the founder of several other companies, and has worked with a variety of life sciences and high-tech startup companies as an advisor, board member, and angel investor.