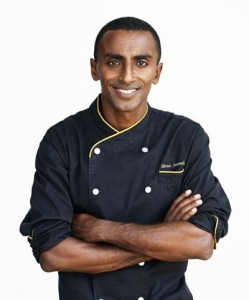 with just the click of a button, it’s no wonder technology has infiltrated its way into all industries. The food industry is no exception, and many new ways to find out about food news and facts are being created every day.

As a chef, it astonishes me to think how far the culinary industry has advanced since I started cooking over two decades ago, from food media and information sharing to actual cooking processes that have been perfected through technology.

Not so long ago, people who didn’t actually farm or cultivate their own food had very little knowledge of where their food came from, how it was produced, or what was in it; now all of that knowledge is accessible simply by searching the web. Food websites like Food52 and phone applications like Fooducate disseminate pertinent information to consumers, which in turn benefits the food industry. Suddenly dishes and foods once unknown to whole countries or regions of the world are accessible to all.  An Ethiopian dish like one of my favorites, Doro Wat, used to be foreign to Westerners; now the public can not only look at what the dish consists of but also how to cook it or where to find it near you.

With the thought of providing the public with even more food knowledge and culture, I’ve created my own website for an often overlooked kind of food lover, men. I wanted Food Republic to break stereotypes of the unhealthy, barbeque-only male, and to reach a new class of home cook. In a short time, we’ve shown that despite conventional wisdom,  in many households it’s the man who is doing the cooking for a couple or a family.

I often also communicate with those who visit my restaurant or website via social media. Through social networking, fans get a more personal and instant look at a chef. I look forward to meeting and interacting with my readers and fans. Now I don’t have to just wait to meet people at my restaurant or at events, I can meet them every day through a “virtual” introduction.

Twitter has also allowed me to get involved in food politics as well.  Food Republic hosted a Live Twitter Chat with myself and fellow chefs to raise awareness about the famine in East Africa. Having been born in Ethiopia, the large number of those suffering from the drought and famine in the Horn of Africa is an important issue to me, so through the various sites like Twitter, Food Republic, and my own MarcusSamuelsson.com, I have been able to constantly update followers about the progress with relief efforts in that region. Through that successful Twitter Chat we were able to not only raise awareness about the famine and hunger issues but also raise to funds for continued relief efforts from UNICEF.  And all in a simple 30-minute virtual chat!

MARCUS SAMUELSSON is an award-winning Chef, Restaurateur & Cookbook Author, celebrated as one of “The Great Chefs of America” by the Culinary Institute of America. After graduating from the Culinary Institute in Gothenburg, he apprenticed in Switzerland, Austria and France before coming to the US. At age 24 he was hired as the executive chef of New York City’s Aquavit; just three months later he received his first of two three-star reviews from the New York Times, making him the youngest person to receive the coveted rating. Samuelsson has also been honored by the prestigious James Beard Foundation on multiple occasions including “Rising Star Chef” (1999) and “Best Chef: New York City” (2003). He has also been named one of the Global Leaders of Tomorrow by the World Economic Forum.  For his complete bio, click here.