[Editors Note: This is the third story in a series about meat distribution. Food + Tech Connect will run these stories every Monday for the next several weeks.]

In mid July, the Environmental Working Group (EWG) released a report entitled The Meat Eaters Guide, full of data and useful visualizations on the environmental impact of 20 “popular” protein sources. 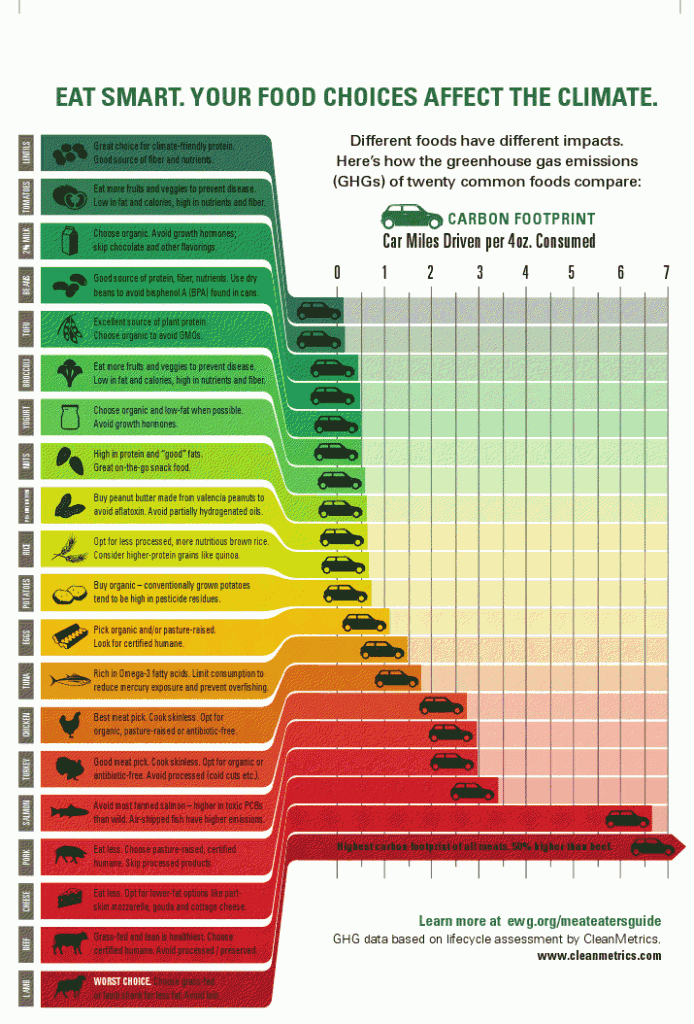 But Lisa Frack, Social Media Manager at EWG sees ways that data can now be reconfigured and recombined with other information to create a useful new app.

The EWG guide assesses the lifecycle of meat, fish, dairy and vegetable protein, and includes easy to grasp charts like The Meat Lifecycle: From Cradle to Grave and Eat Smart which visualizes the greenhouse gas emissions of the 20 food items.

The study confirmed information most of us already know about meat, namely that it is far harsher on the environment than its protein-filled vegetable cousins.  But some surprises also surfaced in the report: cheese impacts the environment more than chicken or pork, and transportation accounts for just a tiny fraction of these food’s carbon footprint (less than one percent of beef’s footprint comes from its moving from processor to store).  Additionally, 20 percent of all meat sold in the U.S. ends up in the trash.

The graphics are simple and elegant, conveying a lot of information in a concise manner.  And yet what if you could interact with that information in a more dynamic way, and use it while you shop?

The app Lisa Frack imagines starts simply as a consumer aid, informing customers as they shop, much like Fooducate. “But instead of using a bar code, maybe there can be a square that can tell you what you need to know about foods,” says Frack.  “Like if I could find out about sliced turkey while I am standing at the deli counter, maybe I could remember what someone told me about nitrates.”

But additionally, Frack sees a more powerful element to the app, one in which shoppers could alert companies to the loss of a sale because of the information learned about a product. “The minute a consumer decides not to buy a product, the app could  immediately enable the person to send that information to the company telling them they lost the sale,” says Flack.  “Companies could then see what people are not buying, and we could communicate more easily to them about what we don’t want to buy.”

About the Author
Beth Hoffman has reported on food and agriculture for ten years, airing on NPR, The World, Latino USA, Living on Earth, KUER and KALW , and studied the food system in depth as a fellow and co-lecturer in the Africa Reporting Project at UC Berkeley’s School of Journalism. Hoffman competed a year long documentary project cooking with immigrant women in their homes, has traveled to India, Uganda and Ethiopia to report on rice production and chicken farming, and did a multipart series for KUER on the artistic, cultural and environmental connections we have to food. In addition to spending many hours on-farm in Utah, California and abroad, Hoffman also married into an Iowa farm family and is currently working with her husband to slowly convert the land into a sustainable orchard and hog farm. She currently lives in Albany, California. Hoffman’s previous work can be found on her website at bethaudio.com.
Previous Next
agriculture, apps, data, distribution & supply chain, entrepreneurial opportunities, Environmental Working Group, food distribution, food tech, Infographics, meat, meat apps, meat distribution, meat eaters guide, Technologists, transparency