[Editors Note: This is the fourth story in a series about meat distribution. Food + Tech Connect will run these stories every Monday for the next several weeks.] 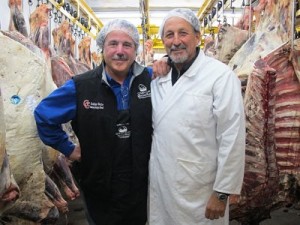 Exactly how much meat is sold at farmers’ markets, in meat CSAs and online in the U.S. is unknown.  But according to the number of custom orders Golden Gate Meats is filling, direct meat sales in Northern California are booming, even without the help of technology that could help streamline logistics in the industry.

“People are better able to access it now,” says Golden Gate Meats owner James Offenbach of the opportunity consumers have to buy directly from ranches online, or in person.  “It is a good movement, and I believe in it.  So we are expanding to meet that need.”

Still a tiny percentage of the overall market, it’s estimated that only about 7% of all organic foods, and only 0.4% of all agricultural products, are sold directly to consumers.  And while meat made up more than half of those sales in 2007, no data exists to say if that market is growing.

Yet anecdotally, processing plants like Offenbach’s, say the market is “exploding.”

While most slaughterhouses in the country usually cut and package meat at their own USDA supervised plants, the only slaughterhouse available to small and organic producers in the San Francisco Bay Region does not.  These ranchers need to then find processing plants able to take small batch orders, and cut beef to custom specifications.  Offenbach and Golden Gate Meats meet that demand by processing for smaller producers wanting to sell directly to consumers.

One of two such plants in the region, the Offenbach family and Golden Gate Meats began in 1977 selling meat at markets under their own brand name.  Since then they have since opened their own retail shop, and now also cut, process, transport and sell the meat of individual ranches, like Bill Niman’s ranch in Marin (formerly of Niman Ranch).

“When we started, we stopped at pay phones to make calls to our customers,” says Bill Niman, Offenbach’s life long friend and comrade in meat.  “The fax was a big break thru for us.  But now we are plugged in 24-7 – on our lap tops, smart phones.  And the productivity of each of us is far higher.”

In addition to using phones and email, Golden Gate also uses technology to control freezer temperatures from home, saving both energy and money.  They’ve also switched to high-tech testing and tracking for food safety over the last few years.  But Offenbach says there is no useful and reliable online program to help them with the logistics of their industry, details like rancher cut orders or transporting a variety of meat brands together to lower cost.

“We are dealing with two very different kinds of customers,” says Offenbach’s daughter, Jonni who runs all ordering at the Santa Rosa warehouse.  “The busy chefs who would rather not talk on the phone, but love to email orders.  And the ranchers who want to see how their meat is being cut and to meet face to face.”

Yet both Offenbach and Niman see great potential in using the web to educate consumers about their products.  “Everything is driven by the customer,” says Niman.  “Social networking is really exciting and can help consumers better understand the marketplace.  If we could just find the time to do it!”

If you have data about direct sales, grass-fed beef or small-batch meat processing, please contact us at beth [at] foodtechconnect.com. As part of this series, Food + Tech Connect seeks data to help investors and entrepreneurs understand the needs of farmers, the opportunities that exist for building online tools for farmers, and the market potential for such services.

About the Author
Beth Hoffman has reported on food and agriculture for ten years, airing on NPR, The World, Latino USA, Living on Earth, KUER and KALW , and studied the food system in depth as a fellow and co-lecturer in the Africa Reporting Project at UC Berkeley’s School of Journalism. Hoffman competed a year long documentary project cooking with immigrant women in their homes, has traveled to India, Uganda and Ethiopia to report on rice production and chicken farming, and did a multipart series for KUER on the artistic, cultural and environmental connections we have to food. In addition to spending many hours on-farm in Utah, California and abroad, Hoffman also married into an Iowa farm family and is currently working with her husband to slowly convert the land into a sustainable orchard and hog farm. She currently lives in Albany, California. Hoffman’s previous work can be found on her website at bethaudio.com.
Previous Next
agriculture, Bill Niman, cattle feeding, CSA, distribution, food distribution, food startup, food tech, Golden Gate Meats, grass-fed meat, James Offenbach, meat, meat distribution, Niman Ranch, ranch, sustainable food, USDA