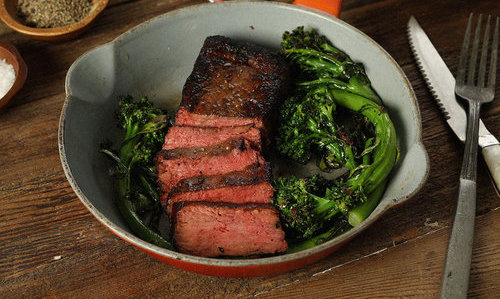 Another meat alternative startup has emerged with a novel product: fungi-based steak. The brand, dubbed Meati Foods, was launched by Colorado-based Emergy Foods. On the plant-based front, Beyond Meat has debut at Denny’s in Los Angeles, with plans to roll out nationwide in 2020.

Good news for health-focused CBG brands came this week when the trade group representing the $25 billion vending machine industry announced that it has committed to substantially increasing the amount of healthy offerings in the nation’s vending machines.

Last but not least, Sweetgreen’s 3.0 location has opened its doors in Manhattan, where the chain is piloting what it calls “concierge ordering” in place of an assembly line.

1. A Startup Just Announced the World’s First Fake-Meat “Steaks” Made from Fungi. Are We Ready? – New Food Economy

2. Hold on to Your Honey Buns: American Vending Machines Are Getting Healthier – The Washington Post

National Automatic Merchandising Association, the trade group representing the $25b vending machine industry, announced it has committed to substantially increasing the amount of healthy offerings in the nation’s vending machines.

3. Denny’s Beyond Burger Debuts in LA Monday, Nationwide in 2020 – Bloomberg

Denny’s will start serving its meatless burger at 180 Los Angeles-area locations Monday, then at its more than 1.5k restaurants nationwide beginning in 2020.

4. Sweetgreen, Pointing to Its Own Past, Hatches New Model – Wall Street Journal

The company says it’s so much more than salad—and wants to change the way it serves up both food and new ideas, its three founders say. Inside their “Sweetgreen 3.0” project.

Free delivery, as of today, is available only to Prime members who have ordered food delivery in the past. Others need to request an invitation, a process that can take some time.

6. Impossible Burger: Here’s What’s Really In It – The Washington Post

The product label is a long list of tough-to-pronounce ingredients – here’s a breakdown of its contents and nutritional value.

New capital will be used to on-board more neighborhood stores and deepen its presence in the country.

Bessemer Venture Partners led the round. By the end of next year the company hopes to grow its business by 15x. It is currently offered in 15 cities across Europe and the US.

Guidepost Growth Equity led the round. Funding will be used to add talent to its workforce and further develop its supply chain automation capabilities.

Investment will go towards expanding manufacturing capacity and R&D support for its Rovitaris protein technology for the meat alternatives market.

A recent study states that transition to organic would increase greenhouse gases. It ignores food waste as a primary contributor to shortages in productivity and glosses over the many mitigating effects organic has on climate change.

12. We Mapped How Food Gets from Farms to Your Home – New Food Economy

The Japanese conglomerate is in the process of raising money for Vision Fund 2. It’s in talks to back a pharmaceutical delivery startup, a robotic burger-making company and a maker of lab-grown meat.