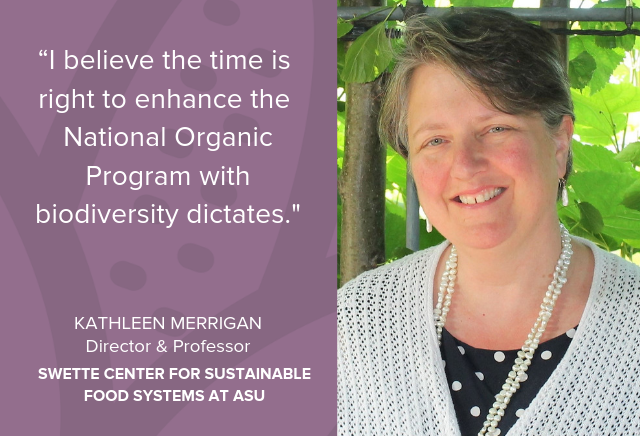 Kathleen Merrigan, former deputy secretary and COO of the United States Department of Agriculture, helped write the original 1990 Organic Foods Production Act (OFPA), and now she says “the time is right to enhance the National Organic Program with biodiversity dictates.” She argues that rather than creating new standards and labels, which often just confuse consumers, there are already built-in mechanisms to push organic standards to better support things like biodiversity and soil health. She also urges that the only way to drive real food system change is to diversify leadership to better reflect societal demographics. In particular, Merrigan argues for increased investment in female founded companies and great representation of women on boards.

Below, I chat with Merrigan about true cost accounting, how we might evolve organic standards to support biodiversity, and how she’s supporting biodiversity through her new role as the director and professor of the Swette Center for Sustainable Food Systems at Arizona State, as a venture partner at Astanor Ventures and as an advisor and a board member and advisor to a number of organizations.

Danielle Gould: What is Arizona State University doing or planning to do to promote biodiversity?

Kathleen A. Merrigan: To understand food production in its full context, we need to factor in, and cost-out, all impacts – biodiversity, human health, water quality, climate, wasted food, etc. In doing so, what are now largely invisible costs (because they are not valued monetarily), become explicit and the choices we make about what, how, and where we produce food will become transparent.

ASU is excited by, and supporting the work that I’m doing related to TEEB for Agriculture and Food, a UN Environment Programme Initiative with several supporters, including the Global Alliance for the Future of Food. Some of your readers may be familiar with TEEB, which stands for The Economics of Ecosystems and Biodiversity. The goal of TEEB is to “make nature’s values visible.” TEEB “AgriFood” grew out of the overall TEEB effort and for the past several years, we’ve engaged nearly 200 scholars across 33 countries in an effort to develop a framework approach that allows us to identify, and place a value on, externalities of food production, be they positive or negative. The simple idea is this: valuations of externalities enable us to understand the true cost of food. This will help our leaders, especially policymakers, make informed — and hopefully better — decisions.

Would such transparency really lead to more sustainable food systems? There is no guarantee of course, but consider the example of wasted food. People were shocked to learn the cost of wasted food, which FAO has estimated to be $1 trillion annually, and the result has been more policy proposals to address the problem. While insufficient reform has occurred to date, I am optimistic that the revelation of the issue through cost accounting will ultimately compel policymakers to act (e.g., not that long ago France prohibited grocery stores from throwing away edible food).

DG: Are there certifications or other signals that can help the average consumer determine what kinds of foods are helping promote biodiversity?

KM: The organic label is best in class when it comes to voluntary certification programs, and I believe the time is right to enhance the National Organic Program with biodiversity dictates. I can assure you that we had biodiversity on our minds when drafting the 1990 Organic Foods Production Act (OFPA) and its implementing regulations published in 2000, and yet you won’t find a specific section on ‘biodiversity dos and don’ts.’

There was anxiety then, and likely now, that it is difficult to measure and enforce biodiversity standards. But we’re smarter today than we were 30 years ago and we have a built-in mechanism to improve organic standards for biodiversity, soil health, and other aspects without new law. OFPA requires every producer and processor to establish an organic plan to be reviewed as part of certification. This requirement has not been utilized in the ways that I had imagined and yet it provides all kinds of opportunity to implement creative and updated thinking about production and handling standards consistent with OFPA and organic philosophy. Unfortunately, this seems to be lost on too many people and we are seeing various labels and certifications in the marketplace promoted as “better than” organic – which is almost always not true and confuses consumers looking to do the right thing.

While we will be prioritizing work on organic at the Swette Center, I should also point out that voluntary standards of any kind are no substitute for public policy – laws and incentives that support biodiversity. Consumers should pressure the marketplace for biodiversity information, but they should also be engaging in policy discussions that create biodiversity mandates, ensuring compliance across food production. A 2017 report on the 400+ voluntary sustainability standards illustrates this point with some good data.

KM: The influx of new capital, particularly from venture capitalists who made their first fortune in Silicon Valley, has the potential to transform the food sector. Many of these firms engage in “impact investing” – meaning they only make investments that align with sustainable food systems. I am a venture partner in such a firm, Astanor Ventures, based in Europe as well as an advisor to S2G Ventures here in the US. Given the current intractability in government at the federal level, I’ve shifted some of my attention to innovations coming from the private sector, and I’m encouraged by the young entrepreneurs whom I’ve met.

Putting a twist on your question and related to the upsurge of venture capital, I want to pitch the power of people diversity. I’ve always said that it is foolish to think that we’ll change the food system without changing the decision makers around the table so to better reflect societal demographics. Part of the ‘biodiversity’ agenda needs to be about supporting women, who find it more difficult to raise capital for their companies and who are poorly represented in board rooms. I cling to the belief that things will evolve naturally, but maybe we need something like the European legal mandate that 50 percent of board seats be held by women or the new California law that requires all public boards to have at least one woman director by the close of 2019 and by 2021, at least three female directors if the board is six or more people; 2 if the board is five people; and at least one female if the board has four or fewer directors.

DG: What are some examples of food products that promote biodiversity?

KM: We need greater diversity in what we grow and eat for the many reasons your readers understand. My students will tell you that I’m pulse-crazy.  FAO has a pretty good website that describes pulses, along with their health and environmental benefits. It goes to my lifelong interest in figuring a way to make crop rotations profitable for farmers. Good, soil enhancing crop rotations are a cornerstone of sustainability and a practice mandated by the Organic Foods Production Act of 1990. But too often farmers lose money on crops that do right by the environment but for which consumers are not clamoring. Chef Dan Barber thinks quite a bit about this dilemma and is championing great cuisine. He has served me “rotational risotto” and “cover crop salad” – both celebrating crops that are not yet mainstream but certainly delicious. 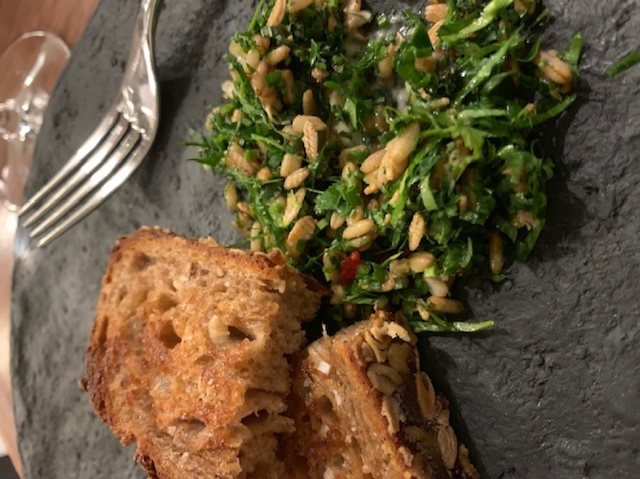 Cover crop salad with oat bread, which she was served by Chef Dan Barber at Blue Hill at Stone Barns // Credit: Kathleen Merrigan

KM: There is seeming abundance of choice as we travel up and down the aisles of our grocery stores. It is fairly common these days to confront up to 60,000 different items in a grocery, with some superstores having as many as 200,000! The Food Marketing Institute reports that the average number of Stock-Keeping Units (SKUs) in 2017 across all kinds of groceries was 30,098. Yet there is a falseness to this – the many brands, labels, and quantity suggest diversity, but when you get beyond the marketing jazz, much of what is presented to us is basically the same – same ingredients, same varieties, same companies. And changing this is tough. It is difficult to get a new item into a grocery unless you’re one of the big guys. I loved that Whole Foods Market had local food foragers who helped smaller scale farmers and food producers make it onto their shelves, but with all the changes that company has and is going through, those days may be over.

Years ago I used to bring my students to the University of Massachusetts Cold Spring Orchard Research and Education Center in Belchertown where they grew over 200 varieties of apples (today it’s more like 100). It was sheer joy to taste the diversity of the apples, and also learn from scientists why certain varieties fell out of favor, or were better than others in resisting pests. But what grocery is going to carry more than a handful of varieties? Even with growing interest in a tastier apple, I would love to see a grocery store with its core mission being a celebration of biodiversity. I’m going to have to dream on that awhile.

On April 30, 2019, join Kathleen Merrigan and Chef Dan Barber for an event on the Power of Deliciousness. The event will also be livestreamed by Food Tank.

Read all of our biodiversity interviews here and learn more about Biodiversity at The Future Market. 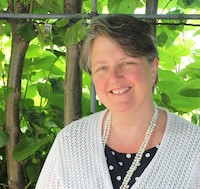 Kathleen A. Merrigan is the Kelly and Brian Swette Professor of Sustainable Food Systems at the Arizona State University School of Sustainability and director of the Swette Center for Sustainable Food Systems. Previously, Merrigan served as Deputy Secretary and COO of the United States Department of Agriculture. She is currently a board member of FoodCorps, Stone Barns Center for Food and Agriculture, Center for Climate and Energy Solutions (C2ES) and World Agroforestry (ICRAF) and is affiliated with Astanor Ventures and S2G, two firms investing in ag-tech innovations.

About the Author
Danielle Gould is the founder of Food+Tech Connect. Connect with her on Twitter, Google+, or Linkedin.
Previous Next
agrobiodiversity, Biodiverse Food, Biodiversity, Kathleen Merrigan, TEEB AgriFood, TEEB for Agriculture and Food