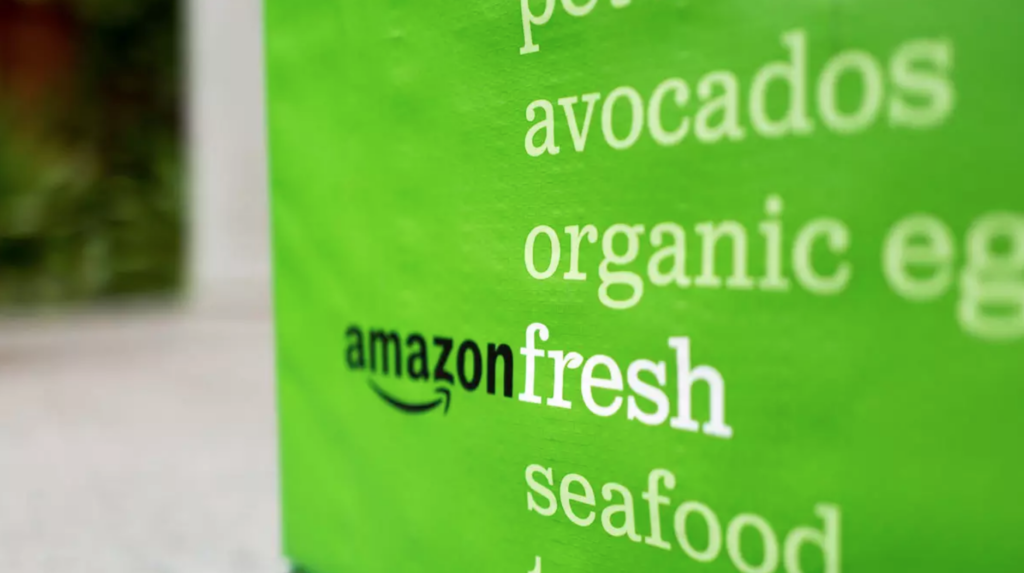 Amazon continues to be an unstoppable force in the grocery wars. The e-grocer recently announced a 50% growth in Q1 earnings through groceries, worth $650m. Recently, the company announced its launch of in-car deliveries. The newest player to enter the game in grocery delivery is DoorDash–the company just launched a pilot program with Walmart in the first of what may be a major move to become a back-end platform for retailers. Walmart is ready to roll out its blockchain technology to help reduce waste, better manage contamination cases and improve transparency.

Back to the Roots has announced a partnership with Whole Foods to roll out its indoor gardening kits in all stores. Silicon Valley’s latest investments have focused on aquaculture technology, which has shot up from zero to nine deals in the past four years. And finally, Beyoncé announced the launch of her new vegan meal planner, 22 Days Nutrition, powered by artificial intelligence.

Amazon sold $650m worth of groceries through its website in this year’s first quarter. Beverages were the top-selling items on the site, representing $285m in sales.

2. DoorDash Makes a Big Push into Grocery Delivery through a Pilot Program with Walmart – TechCrunch

DoorDash is rolling out grocery delivery with Walmart in Atlanta in the first of what may be a major move to become a back-end platform for companies that want a delivery button on their website but don’t want to build the entire network themselves.

The new model offers site-wide price reductions on everyday items as well as buy-more-save-more discounts on bulk purchases, which allow consumers to pay less than half the price of the regular service.

After giving birth to twins, Beyoncé announced the launch of her new vegan meal planner, 22 Days Nutrition. The platform allows users to discover meals, plan their week, shop and cook for meals created by nutrition guidelines that Beyoncé and Jay Z follow.

Square plans to use Zesty’s assets to strengthen Caviar’s corporate ordering business. Neither company disclosed financial terms of the deal.

The series A round involved the likes of Tencent, Lemnos, Crunchfund and Maven, bringing total funding to $15m. The startup now refers to itself as a last-mile logistics company.

The round was led by Accomplice.co, with participation from Golden Venture Partners, Precursor Ventures and Math Ventures. ChefHero aims to streamline wholesale food ordering for restaurants. It plans to build out a team and expand into Chicago.

8. Aquaculture Is the Latest Hotness for Silicon Valley Venture Capitalists in 2018 – Quartz

Since 2013, the number of venture-backed deals shot up from zero to nine last year. Much of the recent investment centers on machine learning and machine vision. This year, two of the biggest investments have been in Aquabyte and XpertSea.

9. Oakland’s Back to the Roots Bets Big on Indoor Gardening – SF Chronicle

The company has formed a partnership with Whole Foods to devote an entire section of each market devoted to indoor gardening kits.

10. Walmart Is Getting Suppliers to Put Food on the Blockchain – Bloomberg

The retailer is ready to use the technology on its food business to help reduce waste, better manage contamination cases and improve transparency.

The company is joining General Motors and Volvo Cars to deliver packages to cars. The deal expands Amazon’s efforts to get consumers comfortable with the idea of strangers entering their personal spaces.

The company will now consider franchising and opening drive-thru restaurants. It plans to rely on new foods and testing to bring back customers.

14. Why the GOP Food Stamp Overhaul Might Not Work – Politico

Republicans have proposed a massive expansion of an obscure job training program as a way to get millions of people off of food stamps. There’s little evidence that SNAP job training works, let alone that it can be scaled up quickly for millions more people.

Although 90% of scientists believe GMOs are safe, only a third of consumers share this belief. Among commonly expressed concerns are unwanted changes in nutritional content, the creation of allergens and toxic effects on bodily organs.