We are thrilled to partner with Ryan Williams to offer our first U.S. Branded Food Investment Report. A reformed banker, Ryan now leads finance and special projects for RISE Brewing Co., an award winning nitro cold brew coffee brand. On the side, he likes techno, backpacking, helping other food entrepreneurs, and long walks through the grocery store.

Editors Note: Please note this database relies on a variety of public sources of information such as industry publications, newsletters, social media mentions, and SEC filings to track investors and investments. While a best effort is made, no guarantee is given regarding its comprehensiveness or accuracy. The database covers the U.S. branded food and beverage category, which includes in-market products sold to consumers through e-commerce or traditional retail channels. Please see our 2018 report for updated 2017 data. 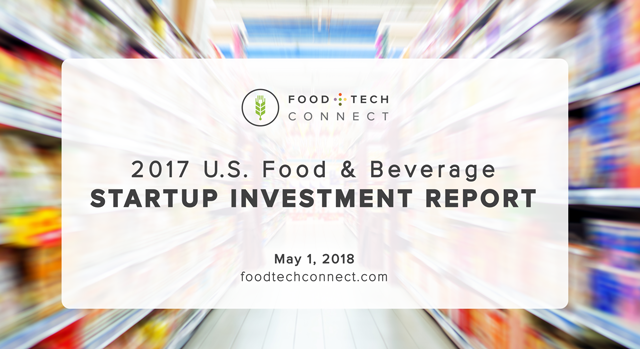 $1.08B in Venture Capital Invested Across 99 Food & Beverage Deals

With acquisitions on the rise and more capital flowing into the industry, 2017 was a great year for U.S.-based food and beverage startups. The year saw $1.08 billion in venture capital invested across 99 deals, according to our research. This is an 87.8% increase from the 66 deals reported by Dow Jones Venture Source in 2016. There were 124 reported VC financings in 2017, however only 99 reported the amount of capital invested. The largest check size of the year was for $190 million to Brewdog, with a median check size of $4.25 million and average check size of $10.9 million. Despite a slight decline from 142 deals in 2016, M&A remained strong with 136 food and beverage deals closed in 2017, according to SDR Ventures.

Please see our 2018 report for updated data, available to us

1. Food is Hot: More people than ever are paying attention to, creating, and investing in food brands. What was once an overlooked, stodgy industry now has a “cool” factor the natural food pioneers of yesteryear could only have dreamed of. As food choices have become a manner of self-expression, categories ranging from craft beer to salty snacks have exploded to fulfill consumer demands, and celebrities and tech investors are taking notice. This is reflected everywhere from the growing number of investors and funds in the space (450+ last year alone), to the record number of attendees at events like Expo West (85,000 attendees), to the mainstream media coverage of food businesses.

2. E-Commerce is Here: For many, Amazon’s acquisition of Whole Foods validated food’s e-commerce future. While meal kit companies like Blue Apron have struggled, nascent digitally-native food brands like Daily Harvest and Soylent have shown great promise. The U.S. e-commerce food and beverage category is expected to grow from just $4 billion and 0.8% of e-comm market share in 2015 to $31 billion and 5.5% of e-commerce market share by 2022 and the events of 2017 are important markers on that trajectory.

3. Plant Power: The most innovative food and beverage startups, by and large, have focused on supplanting traditionally animal-based products with plant, nut and other alternative nutrition sources. Startups such as Ripple, which makes milk from peas, and Impossible Foods, which creates impossibly realistic plant-based “burgers,” are leading the charge in products that do not sacrifice taste for their environmental and ethical benefits.

4. Incumbents Try to Regain Market Share: As big CPG companies continued losing market share, there was again significant M&A activity in 2017 with 136 deals compared to 142 in 2016. As such, corporations continue to adjust their size expectations for targets, acquiring startups with lower EBITDAs as a strategic, defensive move to rebalance eroding market share.

Increased participation of traditionally tech focused investors, a greater emphasis on data driven investing, celebrity participation, and a lopsided funneling of dollars towards the hottest deals and categories defined the major trends of the year.

Many deals reflected the increased sector interest from traditionally tech focused VCs, such as Greycroft (investor in Penrose Hill), GV (investor in Soylent, Blue Bottle and Ripple Foods), and Lightspeed Venture Partners (investor in Daily Harvest). Horizons Ventures, which primarily invests in bleeding-edge tech, helped lead both JUST’s $150 million round and the $75 million Series E for Impossible Foods. As CircleUp CEO Ryan Caldbeck argued in a TechCrunch article, “The uptick in tech VC dollars going to the CPG market is partly because tech investing is brutally competitive and saturated, and largely because these VCs are awakening to the strong historical returns in CPG, especially with the trend leaning towards small brands stealing market share.”

Traditional F&B investors focused on emerging trends and categories like cleaner labels, higher protein, better-for-you snacks and cold brew. Tech-first investors seemed to favor new models of distribution from startups like ALOHA and Daily Harvest, as well as startups with a heavy food science focus like  Impossible Foods, Beyond Meat, and Perfect Day.

CircleUp brought data science to CPG investing in 2017 with the release of Helio, a proprietary machine learning platform that collects billions of data points on over 1.2 million consumer and retail companies in the U.S. to analyze the relative strength and likelihood of success of companies. Helio is designed to help investors make better bets and to inform investment decisions for its newly launched $125 million fund CirlceUp Growth Partners. Notably, CircleUp also launched CircleUp Credit Advisors, a credit platform that provides approved startup CPG businesses with revolving lines of credit to help businesses finance business growth.

The trendiness of food startups has garnered celebrity involvement and investment. Leonardo DiCaprio invested in Hippeas and Beyond Meat, Drake invested in MatchaBar, Serena Williams and Gwyneth Paltrow bought into Daily Harvest, and Olivia Munn took a stake in Chef’s Cut. Celebrities are also getting their hands dirty, with Jennifer Garner joining baby food startup Once Upon a Farm and Ayesha Curry debuting her meal kit startup Homemade. Expect to see more of this in 2018 as celebrities embrace the sales driving potential of their influence.

As big CPG companies continued losing market share, there was again significant M&A activity in 2017 with 136 deals compared to 142 in 2016. Starting with Mars’s minority investment in KIND at a $4 billion valuation and continuing with the announced $1.6 billion SkinnyPop acquisition by Hershey’s and the $4.9 billion Snyder’s-Lance acquisition by Campbell’s Soup, the mega CPGs may be prioritizing stability and needle moving, immediate top line impact over lofty growth projections. Perhaps, some big companies fare best acquiring medium size companies, as there remains a more navigable cultural and operational philosophy between organizations of comparable size.

Still, incumbents are also acquiring earlier stage startups that are on-trend, clean label, and aligned to consumer demand. Unilever, for example, acquired Sir Kensington’s, a maker of “condiments with character,” for $140 million. Kellogg’s purchased RXBAR, a producer of clean label protein bars, for $600 million. Additionally, Otsuka Pharmaceutical Co. acquired plant-based cheese manufacturer Daiya for $325 million driven by its desire to capitalize on the growth of the plant based market.

In 2017, tech backed food had headline grabbing successful exits, like Blue Bottle’s $425 million majority acquisition by Nestle, as well as  flops like Juicero shutting down after raising $120 million. This begs the question of whether the additional capital entering the ecosystem will find its ROI from CPG incumbents who have essentially outsourced innovation to startup M&A or if valuations will need to decrease.

2017 saw $1.08 billion invested in food and beverage startups. The majority of the funding went towards alternative protein focused brands, although other categories and characteristics, such as e-commerce and RTD coffee, also drew investor attention. 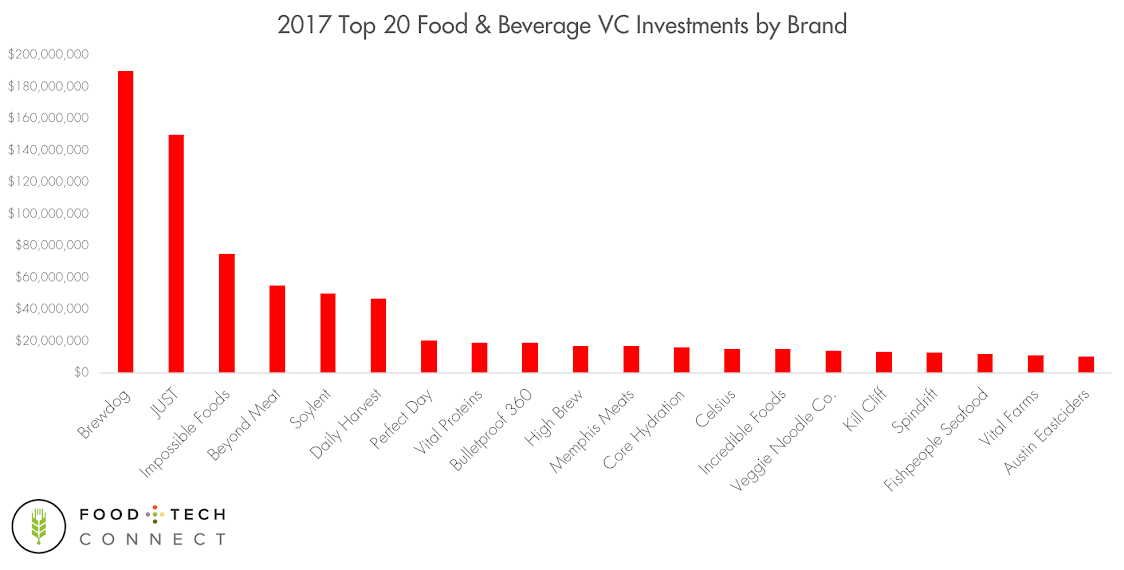 There were some mega deals in 2017. Occupying the 2nd, 3rd, 4th, 5th, and 7th spots were plant-based protein brands. The Top 20 deals (of 99 disclosed financings) accounted for over 72% of total VC funding.

While there does appear to be significant quarter over quarter changes in deal activity, it’s usually the result of outlier investments skewing the trend in an upward direction. For instance, Q2, the largest quarter of the year, saw over $418,000,000 worth of checks went out in that period. Nearly half of those dollars, however, went towards just two companies: JUST ($150,000,000) and Soylent ($50,000,000). That said, investors and founders seem relatively likely to close a deal before year end but if not, are in no rush judging by January and February. 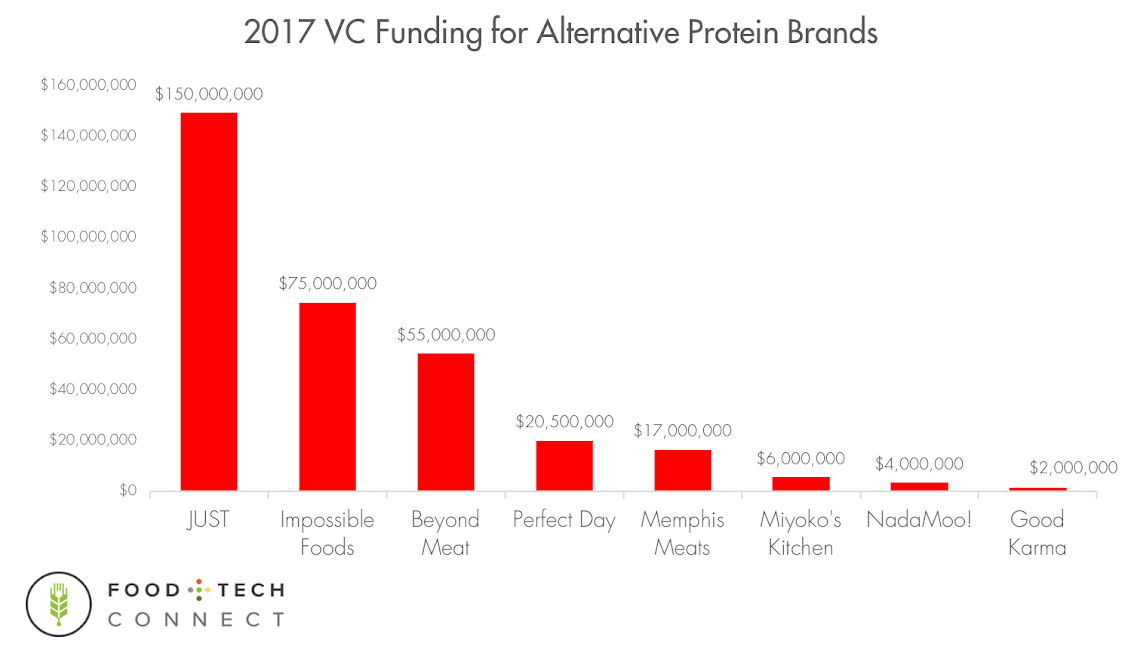 VC’s invested $179.5 million in alternative protein brands developing everything from meat to milk. The top funders in this category include Horizons Ventures, Collaborative Fund, and Khosla Ventures. Tyson doubled down on its investment in Beyond Meat, which it already owned a 5 percent stake in. Consumer demand for plant-based food and investor activism are driving growth in this sector. A Nielsen study commissioned the Plant Based Foods Association and The Good Food Institute  the leading retail sales research company, found that the total market for the plant-based food sector tops $3.1 billion in sales in 2017, up 8.1 percent from the previous year. The Plant Based Foods Association also released new SPINS data indicating that the total market for the plant-based sector (excluding data from Whole Foods Market) tops $5 billion in sales.

Offsetting what The Atlantic dubbed The Great Retail Apocalypse of 2017 has been the meteoric rise of e-commerce across all categories, but especially food. According to Statista, the domestic Food & Personal Care e-commerce category will grow from roughly $47 billion in 2017 to $78 billion by 2022, a CAGR of ~10.7%. Riding this wave are numerous digitally native brands such as Soylent, Daily Harvest and Vital Proteins, who collected much of the $168 million in venture funding for e-commerce food and beverage brands in 2017.

Once Upon a Farm