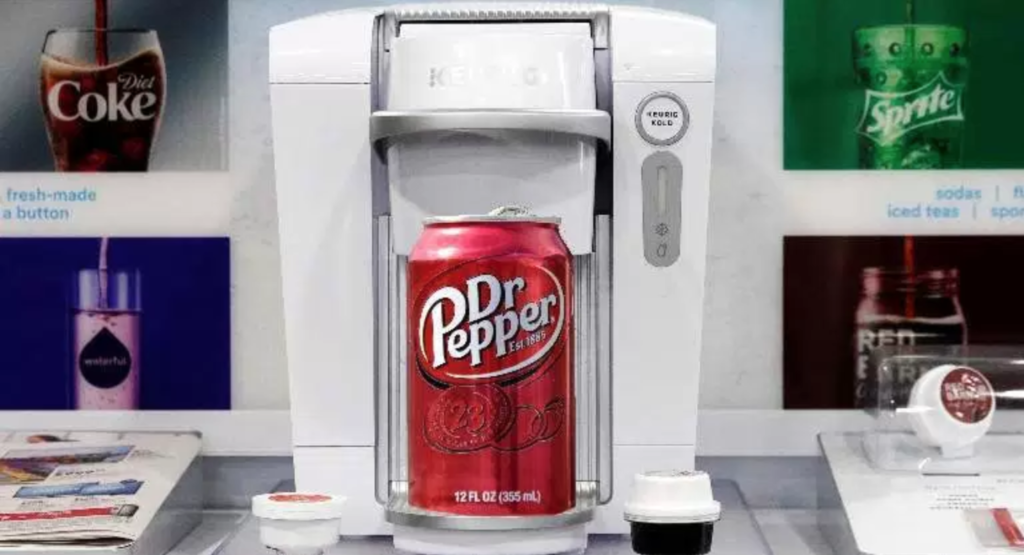 The maker of Keurig’s coffee maker machines has purchased Dr Pepper for $19 billion in cash, making it one of the largest nonalcoholic drink deal on record. Tyson’s VC arm is now taking bets with lab-grown meat with an investment in Memphis Meats. Ripple Foods received a $65 million investment led by Euclidean Capital.

In retail news, meal kit service Sun Basket has secured a $42.8 million investment from August Capital. Uber drivers can now begin selling products through Cargo, which raised $5.5 million from CRCM Ventures and eighteen94 capital, Kellogg’s VC fund. Alibaba has made two major investments in India’s delivery space: $200 million in BigBasket and $150 million in Zomato. Irish food group Total Produce has purchased a 45% stake in Dole for $300 million with plans for a complete acquisition within five years.

The deal will give shareholders of the soda maker nearly $19b in cash and go down as one of the largest beverage deal in years. Keurig’s owner, JAB Holding, is expanding its coffee business into sodas and ready-to-drink beverages.

The company’s VC arm has invested an undisclosed sum in Memphis Meats, adding to the string of high-profile backers including Cargill, Bill Gates and Richard Branson. The company will use the Tyson funds for product development.

The Series D round was led by August Capital and included Unilever Ventures. New funding will be used to build out its personalization tech, expand its menu offerings.

The funding comes from CRCM Ventures and eighteen94 capital, Kellogg’s VC fund. The startup plans to deploy its hardware and software solution in about 20k cars and open in one new city each month for the next six months before its Series A.

6. Nuro’s Self-Driving Vehicle Is a Grocery-Getter and Errand-Runner – TechCrunch

After raising a $92m Series A round, the startup has revealed its autonomous vehicle platform designed to transport goods from a local business to a customer or from one person to another.

Research for growing “super crops” and breeding higher-yielding dairy cows received a funding injection of about $174m from Britain’s Department for International Development and the Bill & Melinda Gates Foundation.

The Irish food group will purchase all shares in Dole within five years, having acquired an initial 45% stake for $300m in cash. Total Produce has the right to acquire an extra 6% of Dole at any time.

With the capital, BigBasket will take on giants Amazon and Flipkart, which are vying to grow their presence in the online grocery space. Zomato will utilize the funds to combat its two largest rivals Swiggy and Foodpanda.

10. There’s a Sexual Harassment Epidemic on America’s Farms – The Atlantic

Many of the women who work in agriculture often have few options but to put up with abuse on the job. Undocumented workers without papers and workers on temporary visas are extremely vulnerable to exploitation in the workplace.

Children are growing up driving large farm machines to help their families. Thousands are injured every year, and many are killed.

12. Kroger Strikes Back at Amazon Go with Expansion of Shopper Tech – Bloomberg

Kroger is expanding its “Scan, Bag, Go” technology to 400 stores. The system allows customers to use a handheld scanner to log grocery items in their cart as they shop, while also viewing coupons and a running total of their order.

13. Why Online Grocery Could Be a $100B Opportunity in the Next Four Years – Food Dive

Online grocery adoption is accelerating thanks to changes in consumer behavior and a few key acquisitions. Seventy percent of shoppers will be buying groceries online by 2022.

After a successful pilot, the quick service restaurant is expanding the use of facial recognition at its Pasadena location from just unlocking loyalty accounts to paying for meals.

15. Walmart to Launch Online Grocery Delivery in Japan, E-Book Sales in US – NPR

Walmart is joining with Japan’s largest e-commerce retailer Rakuten to launch an online grocery delivery service in Japan. The deal includes opening a combined e-commerce fulfillment center in Tokyo to deliver groceries to a wider region.