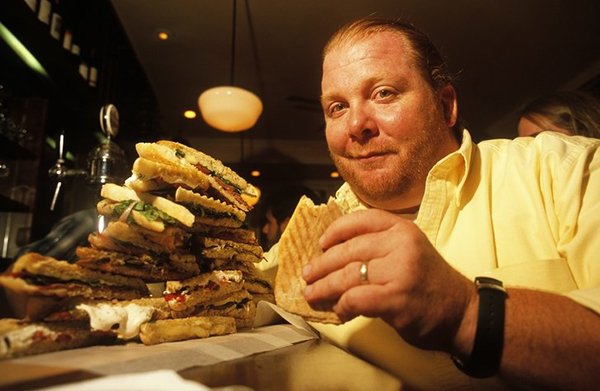 Three prominent men in the restaurant industry – Mario Batali, Johnny Iuzzini and Ken Friedman – have stepped down in the face of sexual misconduct allegations by multiple women.

Target has closed an all-cash deal to buy out Shipt for $550 million up against Amazon. Walmart and Jet are joining forces with BuzzFeed to sell kitchen tools, appliances and food through Tasty’s recipe videos.

Soylent CEO Rob Rhinehart has stepped down aftermajor setbacks over the past two years. Investors are betting on a meat tax and urging big food companies to start diversifying into plant protein. Tyson Foods has taken the cue and joined Cleveland Avenue in a $55 million investment in Beyond Meat.

And finally, Puerto Rico’s food industry is still in recovery mode, and farms were hit the hardest. Global losses are estimated to amount to $2.8 billion.

Four women accused the chef of inappropriate touching in a pattern of behavior that spans at least two decades. Batali will also step away from his television show, “The Chew,” while ABC reviews allegations.

Eight women have come forward with sexual misconduct and abuse allegations against Iuzzini, most of the incidents stemming from his time as pastry chef of Jean-Georges.

Ten women accused Friedman of unwanted sexual advances and many others stated working for him required tolerating daily kisses and touching. He has taken an indefinite leave of absence from his restaurant operations.

4. Target to Buy Shipt for $550 Million in Challenge to Amazon – Bloomberg

The all-cash deal will let Target customers order groceries and other goods online, and then have the items sent directly to their doors from nearby Targets. The deal will give Target same-day delivery at half of its 1,834 stores by next summer.

5. The CEO of Food-Replacement Startup Soylent Is Out – Business Insider

Rob Rhinehart has stepped down, and Bryan Crowley, president of Soylent’s parent company, will take over as CEO. The company has seen major setbacks over the past two years, including a temporary halt to sales after food poisoning incidents.

6. Walmart and Jet Are Joining Forces with BuzzFeed in Their Quest for Millennial Shoppers – Business Insider

The retailer will start selling its kitchen tools, appliances and eventually food through links in Tasty’s recipe videos. Tasty has nearly 91m Facebook followers, and its recipe videos have accumulated more than 65b views.

The bio fund has made dozens of investments already, including Freenome, Apeel, PatientPing and BioAge Labs. Investments range from $2m at seed stage to north of $10m for Series A stage companies.

8. Ginkgo Bioworks Secures $275M in Series D, Valuing the Company at Over $1B – TechCrunch

The company has begun a year-long pilot program that will use blockchain to manage transactions within its tea supply chain. It is partnering with British supermarket Sainsbury, packaging company Sappi and three global financial service companies to develop the blockchain system.

Global online F&B sales will increase 80% over the next five years, according to Euromonitor International. By 2022, global online retail sales will eclipse traditional grocery sales.

11. Taxes on Meat Could Join Carbon and Sugar to Help Limit Emissions – Bloomberg

Investors are betting governments around the world will start taxing meat production as they aim to improve public health and hit emissions targets. They are pushing companies to diversify into plant protein.

Beyond Meat has raised $55m in a financing round led by Cleveland Avenue and supported by Tyson. The funds will be used to more than triple the size of its production footprint, further fund R&D as well as expand sales and distribution.

13. How Puerto Rico’s Food Industry Is Picking Up the Pieces After Hurricane Maria – Eater

Restaurants have begun to open and become hubs for communities. Puerto Rico’s agriculture sector lost $45m of net produce with Irma and $200m with Maria. Global losses are estimated at $2.8b.

The Italian food emporium is planning an IPO on the Milan stock exchange as early as next year. In the next two years, it plans to open 7 locations in 6 countries across Europe and North America.