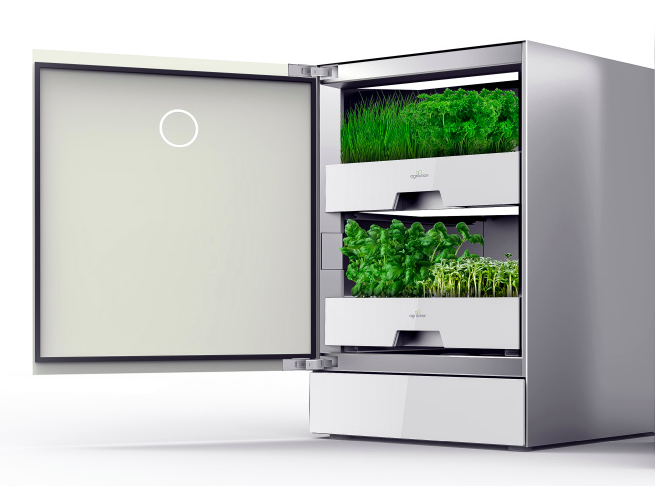 Millennial food innovators are pioneering a better food future from farm to fork. Our Millennial Innovators Uprooting Our Food System series profiles the bright, creative and driven university students from around the world that make up Thought For Food (TFF), a next generation food innovation platform. A global community as well as a summit and business competition, TFF empowers breakthrough solutions to feed nine billion people by 2050. During this month-long series, we will highlight the work of select TFFers who are working to transform our food system.

In our second series post, we interview agrilution co-founder Max Loessl. The germany-based startup has created plantCube, a fully automated vertical farm the size of a dishwasher. Loessl started the company when he was a student at HAS University in the Netherlands after earning funding as a 2013 Thought For Food Challenge participant. He is also the Founder of the Association for Vertical Farming (AVF), a global vertical farming community that aims to propel the development of vertical farming and urban agriculture. His dream is to make vertical farming accessible to the masses and to improve our global food system and feed nine billion people by 2050. Our interview has been edited for brevity.

Thought For Food: What was the inspiration for starting agrilution?

Max Loessl: I’ve always been interested in the Global Grand Challenges and in my personal opinion solving the food challenge is the most important one. I first came across the topic of vertical farming roughly 4 years ago – through a book called The Vertical Farm written by Dr. Dickson Despommier. I was so fascinated by the concept of vertical farming because it combined local food production with technology. I reached out to the author and he immediately replied to me. We exchanged e-mails and I asked where I could study this technology when he suggested HAS University in the Netherlands. I applied, moved and dove into The Internet and meeting with experts for initial research.

There was a disconnect in that vertical farming had tremendous benefits for so many of the challenges traditional agriculture was facing, but no one really knew about it. I wanted to show people this technology was available and profitable today. Founding agrilution and AVF in early 2013 let me create awareness for vertical farming by democratizing the technology and making it available to the masses.

TFF: What is your background and how has that helped agrilution?

ML: I studied International Food and Agribusiness, it helped me because I got an overview on the global grand challenges and learned the basics of starting a company. Although, in my opinion the biggest learning curve comes when you just start doing whatever it is you have dreamt up. I would say I am outgoing, open, honest and  “self-taught” entrepreneur and that has helped me a lot so far.

TFF: Agrilution was selected as a finalist and awarded funding at the 2013 TFF Challenge. What was the TFF experience like?

ML: TFF came at exactly the right time. It made us really sit down and focus on what it is we wanted to do as well as build a real functional prototype to demonstrate our concept. The best thing, however, was meeting the TFF community. It was extremely inspiring to meet so many people from around the world that shared our/my mindset and wanted to improve the way our food system works through innovation and bold out-of-the-box thinking.

TFF: Since participating in the 2013 TFF Challenge you’ve launched plantCube and successfully raised some funding. And any tips for successful fundraising?

ML: It’s taken us almost two and a half years now to develop plantCube from idea to a functional, physical working product. Fundraising always takes way more time than anticipated. Try to get yourself in the situation to be picky with the money you accept and look for someone that believes in your venture and offers more than just money. The best investors are those that offer a network and advice and don’t just look for a high ROI.

TFF: Tell us about the Association for Vertical Farming and what can we expect from AVF in the near future?

ML: With AVF, I wanted industry players, universities, experts and entrepreneurs from around the world to be able to connect, share best practices and collaboratively push the technology further. This culture of collaboration has served AVF well, with pretty rapid growth we now have a team of 19 people with regional chapters in the US, China, India and Europe with 57 companies and universities as well as 150+ individuals members.

We organize events, democratize the knowledge of vertical farming and are currently working on an e-learning platform. There are a lot of very interesting projects in the pipeline for 2016 which you can stay on top of by signing up to our monthly newsletter on.

If you are a university student passionate about disrupting our food systems, form a team and submit an idea to the 2015/16 Thought For Food Challenge by December 1. Ten finalist teams will win a trip to the TFF Summit in Zurich, Switzerland, where they will compete for a chance to win up to $15,000 to launch their ideas. Learn more about Thought For Food.