How ZeroCater Became A $100M Startup With $1.5M Of Investment 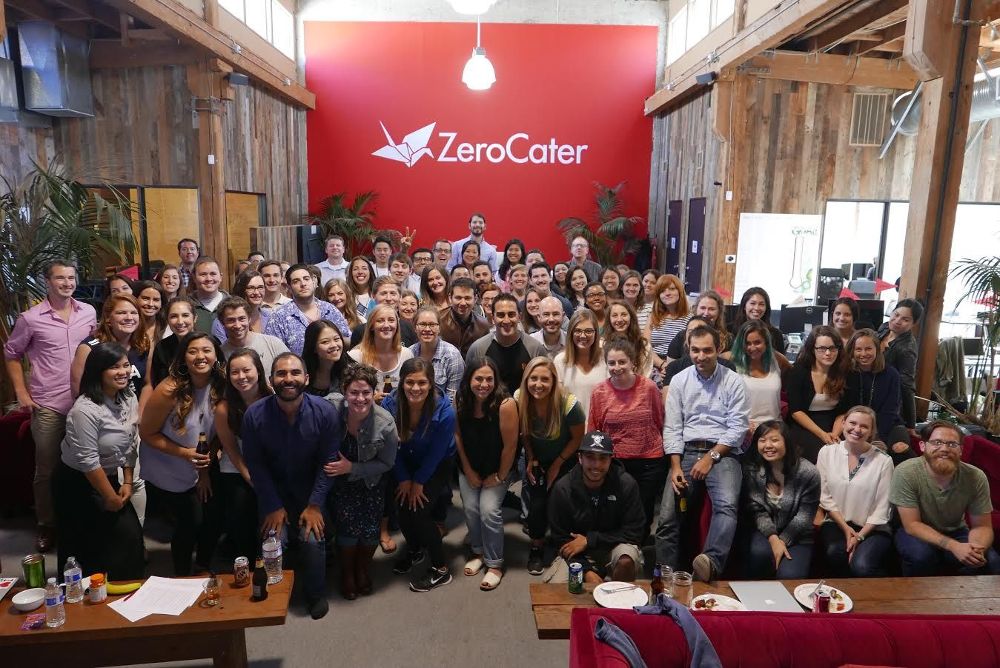 Catered lunch is now a commonplace work perk. Google’s utopian cafeterias set the stage companies in the Bay Area and beyond to provide their employees with delicious meals. As the fifth employee at Justin.tv (now Twitch), Arram Sabeti was tasked with ordering lunch. It was his most stressful and frustrating responsibility, so he decided to launch a company to make it easier for businesses to order food for their employees online.

Sabeti started ZeroCater in San Francisco in 2009 using nothing more than a spreadsheet to facilitate orders between offices and local restaurants. Cut to 5 years later and the Y Combinator-backed startup has built a platform that lets its clients create customized menus, facilitates delivery logistics and tracks performance metrics for its partners, which include restaurants, caterers and food trucks. ZeroCater makes money by taking a percentage of every transaction. The 100 person startup has expanded to Chicago, Washington D.C. and New York City and serves tens of thousands of meals a day to clients including Google, TED, Salesforce and The Daily Show.

In August, ZeroCater hit a major milestone. It announced that it had surpassed $100M in orders with only $1.5 of investment, something that sets the company apart from other office catering startups like Zesty, Eat Club and Chewse that have raised millions to expand. How did ZeroCater do it? The startup focused on demonstrating profitability and hiring the right people rather than bringing on lots of capital to scale quickly. “When we started, VCs had no interest in food tech, but now we’re in the middle of the first-ever food tech boom,” Sabeti tells me.

We chatted with Sabeti via email about ZeroCater’s fundraising strategy, lessons learned from Y Combinator, building successful relationships with restaurants and more. Our interview has been edited for clarity.

FTC: How has your business model evolved since launching ZeroCater in 2009?

Arram Sabeti: We were lucky to find product-market fit immediately, so the concept itself has’t changed much. The way we deliver on that concept has changed tremendously. It started on a spreadsheet. Now we have software that helps us run things. It does everything from help recommend menus for our customers to tracking performance metrics for our restaurant partners. Several restaurant owners have told us that the data is very valuable to them, because it helps them improve their businesses to know when a menu item isn’t working, or when they’re performing poorly on delivery reliability. You can’t improve what you don’t measure.

FTC: ZeroCater recently announced that it has done $100M in orders with just $1.5M in funding. Can you tell us more about why you veered away from raising venture capital?

AS: It’s because the constraint we’ve faced is finding people we want to hire, not capital. We’re 100 people now, but getting there took enough time that our revenue growth always supported our hiring.

Do you have a philosophy that differentiates ZeroCater from other food tech startups that are raising $10M+ rounds and have yet to demonstrate profitability?

I don’t know if I’d call it a philosophy. It just happened to be the right thing for us to do. The problem is when companies raise money not because they’re being strategic, but because it’s available and they underestimate the risks that come with over capitalization.

It feels good to raise capital, and the outside world, lacking other signals, tends to overemphasize it as a proxy for accomplishment. Reporters in particular are guilty of this and tend to pay far more attention to companies that raise lots of money over companies that make lots of money.

FTC: ZeroCater just announced that it has brought a additional $1M in revenue to 20 mom-and-pop restaurants in the Bay Area. Can you tell us more about how you build relationships with restaurants? What challenges do you face with on-boarding this traditionally tech-averse demographic?

AS: The relationships really matter. For a long time we had restaurants that were working with both us and one of our competitors. They’d tell us all these horror stories about people calling and shouting at them over the phone when something went wrong, or refusing to pay for food that they’d deemed subpar. Eventually many vendors stopped working with them, which hurt them in the long term. I can’t say we strategically kept vendors on our good side – it was a natural consequence of the type of people we hired. We wanted to have amazing customer service so we hired a lot of highly empathetic people and those people earned us a great reputation with our partners.

It’s true that it can be hard to get in front of restaurant owners. They’ve got so many people trying to sell them things that they’ve become very skeptical of anything that feels like a sales pitch, so getting to that first conversation can be hard. Once we get in front of them and explain what we’re offering it becomes much easier. Every restaurant wants more revenue.

FTC: You participated in startup accelerator Y Combinator. What were your key takeaways and lessons learned from the process? What tips to do you have for other startups who are considering participating in an accelerator?

AS: The core lessons Y Combinator teaches are simple but in practice easy to be distracted from. Talk to your users. Build something they want. There are so many things to distract your attention at a startup that you can fill all your time with things that don’t really matter. We once asked Paul Graham a question and he refused to answer it because it had nothing to do with growth.

For tips I suppose the obvious thing is to be making something people want. Assuming you’ve done that, make sure you’re good at concisely explaining what you do. Assume the person judging your application is worn out from reading 300 applications before yours. Your signal to noise ratio has to be good.

FTC: What advice do you have for burgeoning food tech entrepreneurs, specifically when it comes to fundraising?

AS: Being ramen profitable is an amazing thing. It completely flips the dynamic on fundraising. Investors are most interested when you don’t need them. Keep your spending as low as possible until you’ve thoroughly validated your idea with happy paying customers.

FTC: ZeroCater has expanded to Chicago, Washington D.C., and New York City since launching in the Bay Area in 2011. You’ve said that ZeroCater is complex to manage, especially at scale. How quickly are you looking to expand to other cities, and how do you plan to do so?

AS: We keep our cards close to our chest for expansion plans. We’ll  have more to announce soon.