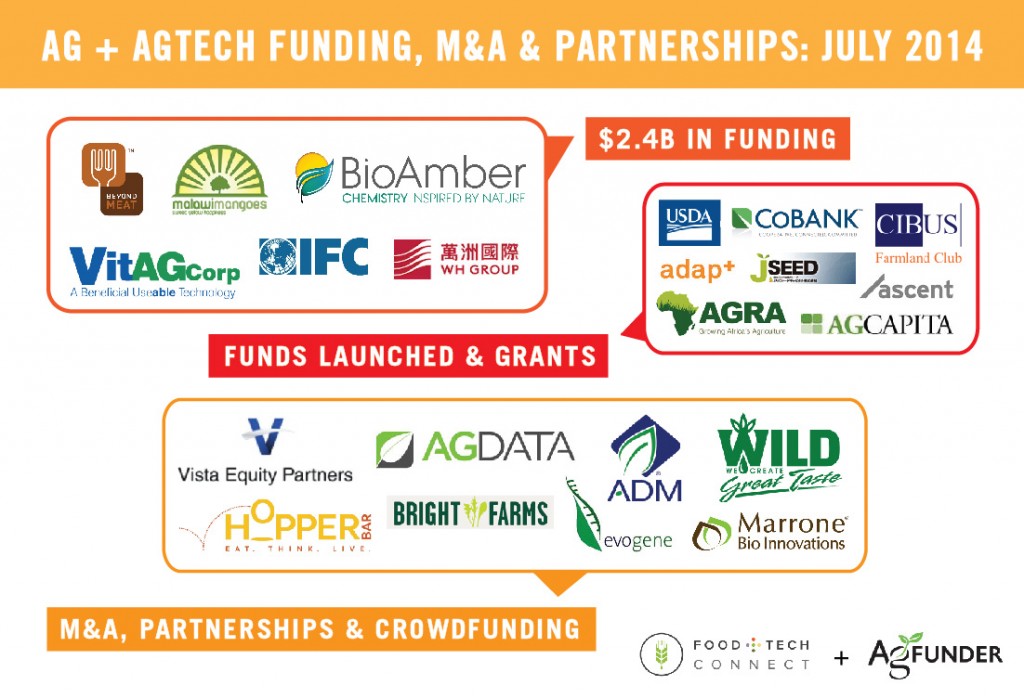 We are excited to announce that we’re partnering with AgFunder to launch a monthly AgTech Funding Roundup. Similar to our monthly Food Tech & Media roundup, we’ll be covering companies that are using technology to disrupt our agriculture and food system.

July brought some big bucks to the ag and agtech sector, as investor dollars poured into initiatives developing drones, fake meat, better crops and alternative fuels. It closed with roughly $2.4 billion in funding across ten deals, four new agribusiness funds with an aggregate value of up to $198 million, several government grants worth a total of $10.2 billion and a handful of newly launched crowdfunding campaigns.

Chinese pork producer WH Group rounded out July as one of the largest private deals, with $2.1 billion raised through its IPO. This was big news after its flopped IPO attempt in April. The UK also made a dent in ag financing, establishing a £8m fund, in partnership with Japanese company Tsukuba Technology Seed Co Ltd (TTS).

The month’s greenest news came from an unexpected place when the White House announced $12.6 million in grants to ten research teams looking for fuel alternatives, and $10 billion in grants for agricultural ventures in rural America. The government said the funds will go to companies addressing wastewater, energy use or current infrastructure issues in ag.

Yet the $10.13 billion in grants from the White House didn’t overshadow a handful of ag and agtech funding rounds from celeb-status ag disruptors. Airware, a drone company providing hardware, software and cloud services for commercial use, closed a $25 million Series B from Kleiner Perkins Caufield and Byers, Andreessen Horowitz, and First Round Ventures. Beyond Meat, the Bill Gates-backed CA-based company that’s trying to trick your taste buds into thinking you’re eating meat, closed its largest round yet (the exact amount is undisclosed). Kleiner Perkins Caufield & Byers joined the Series D, along with DNS Capital, WTT Investments, S2G Ventures, The Obvious Corp., Bill Gates and Morgan Creek Capital.

WH Group Limited Raised $2.1 Billion in HK IPO. After enlisting twenty-eight banks, WH Group’s flopped its April attempt to raise a $5.3 billion IPO. The Chinese pork producer tried again in July and successfully raised $2.1 billion, enlisting just two–BOC International and Morgan Stanley. WH is reportedly looking to raise funds to pay back debts from its 2013 acquisition of Smithfield Foods, the largest pork producer and processor in the US.

Beyond Meat Closes its Series D. The CA-based celebrity-status company keeps raking it in to continue R&D for alternative meats. The company uses plant proteins to make chicken strips, “beefy crumbles” and other fake meat products. The funding size of the Series D was not made public, but was announced as the largest raise the company has seen yet. Beyond Meat says it plans to use the funds to spread consumer awareness and continue increasing its manufacturing facility’s capacity, as products fly off the shelves.

IFC Invests $18 Million into DRC Maize Production. The $18 million loan went to the Terra and African Milling Company Congo, a maize meal production company in Southern DRC. Maize meal is a staple food in the region, with the population demanding at least one million tons per year. The Katanga region imports nearly all of its current food. The funding will allow the company to expand its farm size from 1,500 hectares to 5,000 hectares by 2017, and continue to operate its mill which is capable of producing up to 100,000 tons of maize meal per year. The funding isn’t the only agribusiness investment IFC has made; it has invested $1 billion in the agribusiness value chain in Africa, and plans to double the investment by 2018.

Airware Closes $25 Million Series B. Drones are causing some of the biggest buzz in the ag space, as Airware Founder and MIT-grad Jonathan Dewey has caught the eye of some big-name investors like tech-investor, Andreessen Horowitz. Airware offers hardware, software and cloud services for commercial drones, and features a “plug-and-play” framework for consumers to use the sensors, airframes, payloads and software they want.

BioAmber Receives $7 Million from Sustainable Development Technology Canada. The MN-based biotech company’s Canadian subsidiary, BioAmber Sarnia Inc., received the grant to support the on-going construction of what will be the world’s largest bio-succinic acid plant in Sarnia Ontario. Succinic acid is used in many everyday products, such as car interiors, plastics, resins, food additives and personal care products. (In case you were wondering, succinic acid also occurs naturally in broccoli, beets, rhubarb, asparagus, cheese and more.) The company says the plant will be complete in 2015.

Fertilizer Company, VitAg, Raises $110 Million in Private Equity. The private funds will in part be used for the SC-based company’s biosolid-to-fertilizer plant in Zellwood, Florida. The fertilizer plant is designed to produce slow-release organically enhanced premium fertilizer, and will combine biosolids, sulfuric acid and ammonia to produce an enhanced efficiency fertilizer, which VitAg says will meet the EPA’s highest standards. The financings included an equity investment led by TPG Alternative and Renewable Technologies (ART), a $64 million offering of 22-year tax-exempt bonds through the Orange County Industrial Finance Authority, led by Citigroup Global Markets, and a credit facility from an affiliate of Tennenbaum Capital Partners.

Australia’s Richest Woman Pays $40 Million for Half of Two Cattle Companies. Gina Rinehart’s Hancock Processing Pty Ltd. paid a whopping $40 million for half of two cattle stations in Liveringa, Western Australia, and Nerrima, New South Wales. The other half of both cattle ranches is owned by Dowford Investments, which is headed by the Milne AgriGroup under Graham Laitt.

Chinese Dairy Producer, Huaxia Dairy, Raises $106 Million. The high-quality dairy producer raised the funds from an investor group led by Singapore’s sovereign wealth fund GIC, which provided $70 million. Private equity firm Olympus Capital Asia funded $30 million. Thanks to previous funding, Olympus has a total of $108 million invested in the company, and is Huaxia’s largest shareholder. The funds will be used to ramp up production, and retail the company’s products.

IFC and GAFSP Invest $10 Million in Malawi Mangoes. TheInternational Finance Corporation (IFC) and the Private Sector Window of the Global Agriculture and Food Security Program (GAFSP) each agreed to invest $5 million in Malawi Mangoes, the first banana plantation in Africa to receive the Rainforest Alliance accreditation, and the first mango plantation in the World to receive the accreditation.  The organization plans to use the funds to increase exports, and bring more rural jobs to the region.

Eastern African PE Firm, Ascent, Reaches $50 Million for Rift Valley Fund. Kenya-based private equity firm, Ascent Capital, announced that for the first time, local pension funds were committed to its $50 million fund. Both regional institutions and private international investors contributed to the fund, which will invest in 8 to 12 companies in the region, with investment sizes ranging between $1 million and $9 million. One of the fund’s partners, David Owino, told Agriinvestor they were keen on investing in the agri-processing sector more than primary agriculture.

Agcapita Launches Farmland Fund V. The Canadian fund will hold farmland in Western Canada, and is open to investors in British Columbia, Alberta, Saskatchewan, Manitoba, Ontario and Accredited investors in Quebec. The firm launched its first fund in Q1 2008, and this fund is its fifth.

Dutch Ag Consortium Launches €50-€100 Romanian JV Fund. Agriinvestor announced the launch of the Cibus Farmland Club, a fund aimed at small to medium sized investors to complete a €50 to €100 over the next two years. The club was formed through a partnership between the Dutch ag consultancy firm, DLV Plant, farmland investment firms Farmfield and Interfarms, international tax, fund, and corporate specialist Van Campen Liem, and accountants from Ernst & Young.

U.S. Government Announces a $10 Billion Fund for Rural Ag. Tom Vilsack, ag secretary for the USDA, compared his department to eHarmony.com, explaining that it will serve as a liaison between government funds and ag projects in rural America. The fund’s first $10 billion is from CoBank, a national cooperative with a focus on rural America. Projects eligible for funding are those with a wastewater, energy or infrastructure development focus.

U.S. Government Announces $12.6 Million Grant to Biofuel Research.  The U.S. Department of Ag and Department of Energy partnered up to award ten projects improving plant feedstocks for bioenergy up to $12.6 million. The funding was a result of Obama’s effort to diversify the nation’s energy resources, and the projects funded are those which use genetic breeding to improve how biomass may be used to provide fuel, without disrupting food production.

Announced: 7/17/14 Terms: Theinitial funding will fund each project by up to three years. The DOE provided $10.6 million, and the USDA provided $2 million.

AGRA Alliance Announced a $4.25 Million Grant for Tanzanian Ag. The organization, focused on improving food and agricultural sustainability in Africa, announced the $4.25 million will go towards improving seed productivity and market-accessibility for farmers and ag-workers in Tanzania. The alliance was founded through a partnership between the Rockefeller Foundation and the Bill & Melinda Gates Foundation.

Archer Daniels Midland Acquires WILD Flavors for 2.2€. ADM, the country’s largest food processor, made its biggest deal by buying WILD Flavors, a company manufacturing “flavor systems”. (They’re the same guys that own Capri Sun.) ADM says that the acquisition helps them diversify their portfolio, especially after acquiring a soy protein plant in Brazil, and building a sweetener and soluble-fiber manufacturing facility in China.

BrightFarms Launched a $50K IndieGogo Campaign, Later Canceling. The well-known hydroponic greenhouse company launched the campaign, using its next greenhouse in Washington DC as the campaign’s goal. But for many, the campaign struck confusion as just six months prior, BrightFarms closed its $4.9 million Series B. One week after the launch, CEO Paul Lightfoot said the IndieGogo campaign was intended “to generate excitement for the construction of our new greenhouse” but instead, caused confusion for those who thought the construction hinged on the campaigns success. The IndieGogo campaign has since closed.