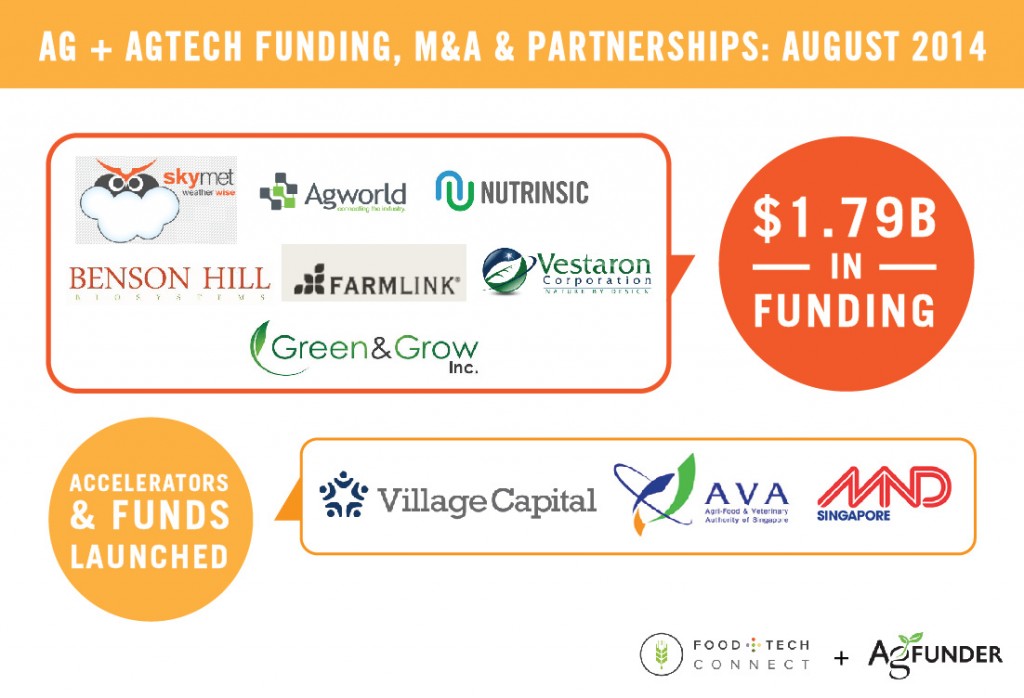 August was filled with Series B’s and C’s for ag and agtech companies, netting about $79 million in private funds. Two big data companies raked in $45.5 million, an animal-feed company pulled in $12.7, a pest-eliminating company raised $10M, two biotech companies brought in in $7.5M and a weather-forecasting system pulling in $4.5M. August showed, yet again, that investors are big on data.

The largest investment of the month, however, went directly into the field. Africa’s richest man Aliko Dangote, whose financial worth is estimated at $25.1 billion, invested $1 billion into Nigerian rice production.

Asia also saw heavy investment, but this time from the government. Singapore announced a $63 million Agriculture Productivity Fund to help local farms boost yields and raise productivity. Roughly $53 million of the fund will go to farmers looking to boost farming capability and development, and about $10 million will go towards R&D for innovative technologies.

Nigerian Rice Production Receives $1 Billion from Africa’s Wealthiest Man. Aliko Dangote, Africa’s wealthiest man who made his fortune from investment in cement, flour, sugar and agriculture, made the largest investment in rice production that the country has ever seen. Around the time of the investment, the Carlyle Group and Blackstone both announced that each firm is partnering with the Dangote Investment Group to invest in Africa’s energy and agribusiness sector in sub-Saharan Africa.

Skymet, an Indian-based Weather Forecaster, Raises $4.5 Million Series B. The Mumbai-based weather forecaster provided India with the country’s first consumer weather site. The company says it will use these funds to expand its weather forecasting system to detect hail and frost, begin research and development to improve weather and crop area/yield forecasting and expand its network into Asia and Africa.

Agworld, Online Communications Platform for Farmers, Raises a AU$ 6 Million Series C. Yet another example of big data drawing in the big bucks, the Australian company Agworld says it will use the funds to expand into the North American market, in addition to improving the farm management service. The platform allows for communication between farmers, as well as provide agronomist recommendations, crop production plans and harvest reporting.

Benson Hill Biosystems Topped Off $1.5M Seed Round. An ag biotech company using photosynthesis to improve crop productivity, the company topped off its round with $50,000 from investor iSelect. Benson Hill CEO Matt Crisp told BizJournal the company plans to raise a $7 million Series A, which is expected to close later this year.

FarmLink closes a $40 Million Series B. The big data company organizing ag information into a consolidated software platform, FarmLink is the creator and provider of TrueHarvest, which is a platform helping farmers grow more efficiently by showing field information down to 150-square-food micro-field levels. The platform provides estimates on productivity and profitability after factoring a wide range of variables.

Bioinsecticide company, Vestaron, Raises $10 Million Series C. The Kalamazoo-based bioinsecticide company takes a different approach to killing bugs by using a peptide-approach. After identifying three peptide compounds that are needed for insect survival, Vestaron has produced a product that is harmful to insects, and harmless for humans and pets. The round was let by the ag-active investor, Cultivian.

Green & Grow Raises $6 Million Series B. The Austin-based producer of bio-products has produced an “Agriplier” line of products, which are non-living, non-toxic, microbe-derived by-products that may be used in seed and soil conditioners. The company says that the products continue to receive good reviews from field trails, and produced the best results in the 2013 Independent Professional Seed Association (IPSA) trials.

Village Capital Launches Ag Accelerator. The accelerator is interested in innovations that increase resource efficiency in the ag supply chain, improve efficiency of crop production and/or optimize ag inputs with emphasis on increasing small farm productivity. They are also interested in inventions that allow for better aggregation and distribution of food with fewer resources. The two businesses ranked highest by peer companies at the end of the program will receive $50,000 investment each from Village Capital and Radicle Capital.  (See the program details here.)

Singaporean Government Announces a $63 Million Fund for Farmers. The government is designating about $53 million directly towards farmers looking to boost productivity through farm development, and $10 million is going towards R&D of farm tech. The government has also built incentives into the fund to have farmers continue to work after their 10-year leased farms, on the principle that they are meeting minimum production levels and do not plan on developing the land.