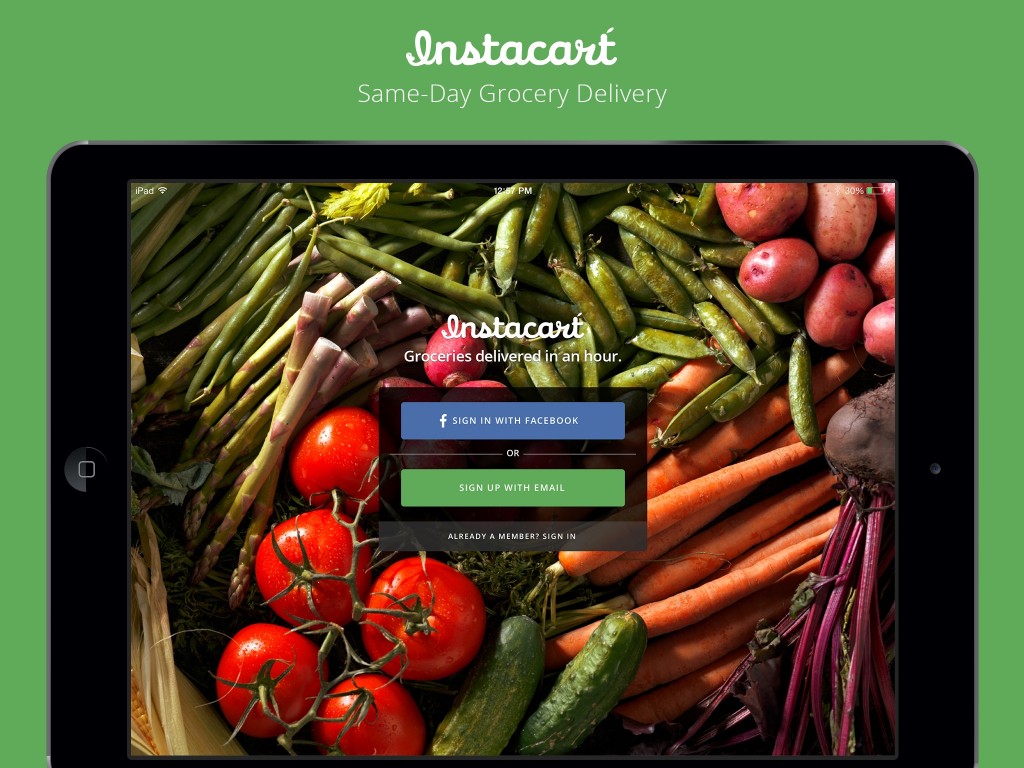 As the online grocery delivery space explodes, brick and mortar grocers are experimenting with online ordering. But the delivery logistics and economics have proved challenging. Instacart allows people to order groceries online from stores, and the stores don’t have to worry about logistics. The San Francisco-based startup’s personal shoppers pick up and deliver groceries from multiple stores – including Whole Foods, Safeway and Costco – in as little as one hour. It’s like TaskRabbit for grocery delivery.

After working as an Amazon supply-chain engineer for two years and witnessing the challenges the company faced with perishable storage and shipping, Instacart founder Apoorva Mehta set out to do a better job of solving the grocery delivery conundrum than his former employer. After a stint at startup accelerator Y-Combinator in 2012, he launched Instacart in San Francisco, and since then the startup has seen its customer base grow by 10 percent week over week.

Instacart has received some eye brow-raising investment and is expanding fast. In July 2013, the startup raised a $8.5 million Series A, led by  Sequoia Capital (an initial investor in WebVan) and put that capital towards rapid expansion. In the last 8 months, the startup has launched in 5 cities – Boston, Chicago, Washington DC, Philadelphia and, starting last week, New York City. In new cities, Instacart has experienced 15-20 percent customer growth week over week, New York City launcher Susie Sun tells me.

People can shop from a variety of stores through Instacart’s website or app and select a 1 or 2 hour delivery, or a later time. Instacart then dispatches a personal shopper – someone who is screened (a la TaskRabbit ) and trained to pick produce better than the customer can themselves – to fulfill the order.

The shopper navigates the shopping process with the Instacart shopper app – which features detailed maps of the supermarkets and directs shoppers to certain aisles to facilitate efficiency – and then checks out and pops the customer’s groceries in Instacart’s reusable bags. The shopper then delivers the groceries by car, except for in New York, where public transportation, walking or biking  are all accepted delivery methods.

Instacart’s fulfillment system dispatches shoppers based on their location in relation to the location of the customer. Shoppers fulfill multiple orders at once and are almost always at 100 percent utilization, Sun tells me.

Instacart makes money by marking up retailer prices and charging for delivery. Markups vary on a a store by store basis, and it charges customers per order – generally $3.99 for 2 hour delivery or any other scheduled time and $7.99 for 1 hour delivery, for orders over $35. Additionally, Instacart offers an Amazon Prime-esque model, called Instacart Express, which waves all delivery charges for an annual fee of $99. This seems like a bargain compared to Amazon Fresh’s $299 annual subscription fee.

Instacart’s personal shoppers receive commissions based on the number of items in a given order and the number of orders they deliver. They also receive 100 percent of customer tips. As of late January, the company was not yet profitable, but it had done “tens of millions of dollars in revenue,” reported the San Jose Mercury News. Sun declined to comment on profitability or revenue figures, but she did say that Instacart has seen revenue increase by 240 percent over the past two months.

The startup does not create formal agreements with its grocery stores (see Editor’s Note), which has proved challenging. Trader Joe’s was taken off Instacart’s platform after the chain banned personal shoppers from its stores. And while retailers on its platform – like Whole Foods, for example – have their own competing delivery services, some analysts say they should welcome the business.”Everybody is fighting tooth and nail to get sales today, so any source of incremental business to them is a plus, and they don’t have to pay markdown dollars or cut their prices to get it,” Bill Bishop of Brick Meets Click told Bloomberg Business Week.

When Amazon Fresh, PeaPod and others expand nationally, which is only a matter of time, Instacart will need to find a way to offer competitive prices. For now, however, the startup is far outpacing its competitors in terms of expansion, because it doesn’t require costly infrastructure to set up shop in a new city. It plans to roll out in all major US cities by the end of 2014.

Down the line, Instacart may also need to create more structured partnerships with retailers and update its website interface to include price comparisons, crowdsourced product ratings and social grocery lists, as TechCrunch’s Josh Constine suggests. But for now, Mehta and the Instacart team are betting that the other guys will take a while to successfully navigate the “mechanics of perishable inventory,” and by that time Instacart will already have established robust customer bases in hundreds of cities nationwide.

If you’re interested in trying out Instacart, you can receive $10 in free groceries and free delivery with this link.

Find this article valuable? Help us continue bringing you the news, insights and community you depend on by making a small contribution. Learn more HERE.