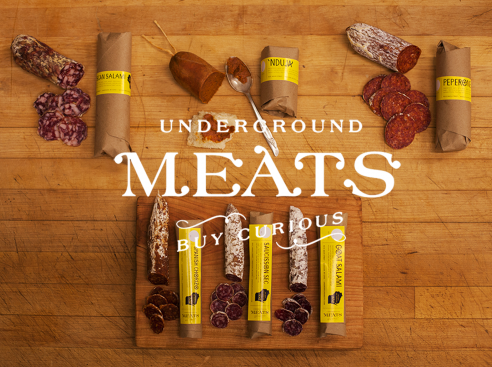 Sustainable meat producers face many challenges, like scaling distribution, inventory management and USDA certification. As part of the USDA certification process, the agency requires producers to have verified a Hazard Analysis and Critical Control Points (HACCP) plans–a multi step food safety and sanitary practice plan that details how a business will operate and, most critically, how it will keep levels of contaminates safe for consumption. This process can cost producers up to $40 thousand and prohibits many from certification.

Enter Underground Meats, a Madison, Wisconsin-based restaurant, catering and butcher shop that’s hoping to take the complexities and financial burden out of developing a HACCP plan. The company recently launched a Kickstarter campaign to raise funds so it can create and validate– verify the procedures and techniques to the state/federal agencies, including studies and product testing–an open source dry cured salami production HACCP plan model and release it under the CC0 Public Domain Dedication. Additionally, the company hopes to provide instructional videos and templates on the salami-making process and partner with Food Safety News and the Niche Meat Processors Assistance Network to distribute and educate producers on the model. And for their top tier campaign supporters, the team will assist in writing their HACCP plans.

Instead of hiring a third party for a verification fee, the Underground Meats team tackled their initial HACCP plan by themselves and became incredibly frustrated with the lack of available information. “We don’t want people to waste as much time as we did. There are people who have info and didn’t share it– and we feel that an open source HACCP plan is the way to get the information out to the community,” Jonny Hunter of Underground Meats tells me.

The Underground Meats team is not looking to create a cut-and-paste salami production food safety plan, Hunter tells me. Rather than offering a catch all plan, the team hopes to create a jumping off point, a strong educational foundation for small salumi producers. “We want to help people understand the process by providing them with a model that has verifiable information. With the funds raised, our team will find the validation out there and figure out what testing needs to be done. For example, what pH levels does the the fermentation need to hit to get rid of any Salmonella in the meat,” says Hunter.

Food Safety scientists from Madison-based meat giant Oscar Mayer helped Underground Meats draft its first plan, by providing insights on procedures and techniques. In fact, according to Hunter, large companies commonly share their HACCP information freely. It’s the smaller players who keep their plans under lock and key because it is so expensive to hire an outside authority to to validate their procedures and techniques, he says. With this HACCP open source model, Underground Meats hopes to level the playing field for small producers, bringing transparency to the process to help build the community of producers, local farmers and growers.

You can learn more or donate to the campaign here.