Are Some Restaurant Chains Too Big To Fail? 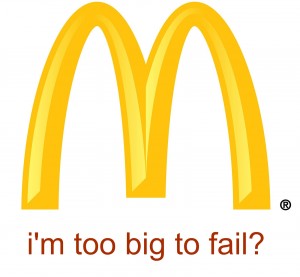 The “too-big-to-fail” theory asserts that certain financial institutions are so large and so interconnected that their failure would be disastrous to the economy.  The original term “too big to fail” was popularized by U.S. Congressman Stewart McKinney in a famous 1984 Congressional hearing, discussing the Federal Deposit Insurance Corporation’s intervention with Continental Illinois. Most recently, Federal Reserve Chair Ben Bernanke also defined the term in 2010:

“A too-big-to-fail firm is one whose size, complexity, interconnectedness, and critical functions are such that, should the firm go unexpectedly into liquidation, the rest of the financial system and the economy would face severe adverse consequences.”

Until now, this assumption has only been applied through the governance lens when dealing with financial institutions. If you break down what “too big to fail” actually measures, however, it’s a business model and/or a company that’s so important to economic activity that they should become recipients of beneficial financial and economic policies from governments or central banks. Within this context, this theory could actually be applied across all business sectors and used to evaluate the impact of an unexpected market breakdown or failure.

Let’s take one of America’s favorite past times, eating, as an example. America is the home to some of the biggest food companies in the world. McDonald’s, Subway and Starbucks alone take in over $60 billion in yearly sales in the U.S. McDonald’s global sales numbers have them taking in nearly $45 billion outside of our borders. Without breaking down these mammoth numbers, it’s easy to see how much leverage these companies have.

Let’s just hypothesize some of the inherent risks these companies have on our economic system:

Concerns surrounding the role large food companies  play in the ethical, environmental and societal impacts of food production and consumption have been documented fairly regularly. But I’m curious about the economic impact and future concern around how interconnected these companies are and the fragile ‘commodity’ of food. When big companies leverage only a few suppliers or manufacturers, they can control the market for that item and create a very tight and guarded buying structure.  For many of these firms, food acts as commodity, not a source of nourishment. For example, shortly after McDonalds’s cut the Angus burgers from U.S. menus U.S. beef prices hit a 10-year high, because they have such a big wedge in the beef commodity market.

When a company grows to a certain scale, one of its major revenue drivers is new store openings. Everything else on the P&L generally falls in line with the ability to rapidly develop more unit locations. Unfortunately, when these companies are not driving that metric sufficiently, there’s disruption that ripples down through the web of distributors, vendors and shareholders.

Don’t get me wrong, large business has provided millions of people across our country the opportunity to live a meaningful and fulfilling life. The problem arises when these companies grow to support infrastructural need rather than consumer need, inseminating artificial revenue and economic instability into many of our country’s communities. My company, Panera Bread, recognizes this polarizing challenge, which is one of the reasons it launched Panera Cares, to help fight food insecurity and fill bellies in a way that provides self esteem to the less fortunate while generating local economic activity.

In summary, big business has the responsibility to not only drive profit to their shareholders, but to interpret the current climate of their customers well being. The more large companies isolate and curb interference from potential future competitors, the more it hurts local economies and the future of food in our country. Legacy techniques and current strangleholds on distribution can be disrupted by people making smart choices and fortunately, the traditional retailers are starting to take notice. The end goal here is to drive these large companies into making the right social and economic decisions that ultimately put them into a competitive advantage. Once that happens, a tidal wave of progress will be made.

About the Author
http://www.chopbiscuit.com
Danny Carberry is an experienced Industry professional in new retail innovation strategy, concept & product on-boarding, competitive strategy analysis and creative applications. He currently serves as Director of Concept for Panera Bread, LLC. In this role he leads new product development projects – from concept creation through commercialization. He is also responsible for directing the guest experience in Panera's bakery-cafes. He joined Panera Bread in 2003 as a store operator and soon thereafter transitioned to Panera’s R&D team as a Concept Manager. Carberry helped facilitate the development of numerous company initiatives, including the acquisition of Paradise Bakery in 2008. He was a winner of the prestigious Motherbread Award in 2012, which is the top honor given to a Panera employee. Prior to Panera bread, Carberry owned and operated an American Bistro concept in Upstate New York and was a professional stand-up comic and comedic writer. Carberry graduated from East Carolina with a Bachelor of Science in Hospitality Leadership and currently resides in Saratoga Springs, NY with his wife Katie and son Jack. Connect with him on Twitter and Linkedin.
Previous Next
food tech, future of food, Restaurant monopolies, restaurants, Too Big To Fail