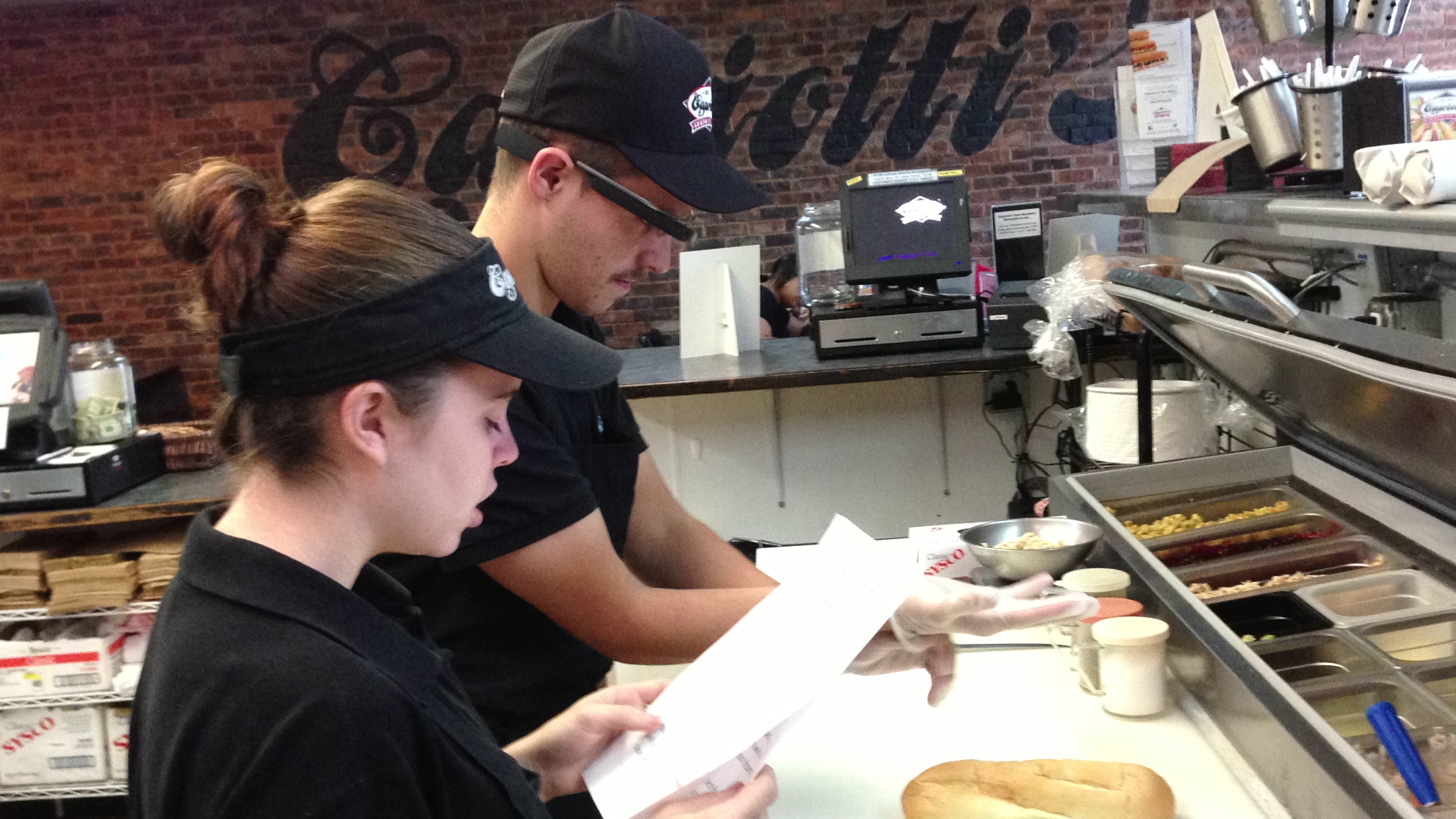 The hunt for real world applications for Google Glass, Google’s new wearable computer that promises to revolutionize how we access information and document the world around us, has only just begun. Roughly 10,000 people have been hard at work exploring ways to utilize the technology, such as inside the operating room for real time medical education or for providing driving directions and up-to-date data about electric cars with GlassTesla. Those who were able to score the highly coveted technology either did so by pre-ordering Glass at the 2012 Google I/O conference or by entering Google’s #ifihadglass contest, which asked people how they would utilize the technology.

One of the winners, Jason Smylie, Executive VP of Capriotti’s Sandwich Shop, is using his glass to improve Capriotti’s training program. He submitted a photo of his infant son with the caption “#ifihadglass my baby son would someday see his world through my eyes,” but decided to leverage Glass to improve operational efficiency and keep his employees excited about working for the sub shop. Smylie believes that “like the cell phone, iPod, and tablet before it, Glass is going to both literally and figuratively revolutionize the way we see and interact with the world.”

Smylie and his team started by using Glass to re-film the company’s training videos to give their trainees a first person look at what they’d see on the front line of sandwich fabrication. They are now expanding the videos to cover their point of sales system (POS) and guest interaction.

Management trainees also wear Glass during rush hour periods and then review the footage with higher ups, like an athlete studies his footage to improve his game. In the future, Smylie plans on issuing Glass to their entire nation-wide training team and to their franchise business consultants so they can provide constructive visual feedback to individual Capriotti’s operators.

While the Glass training has not been institutionalized across the board, Smylie says that initial employee reactions have been enthusiastic. “Being at the cutting edge of technology without having to risk lots of capital to do so, has everyone really excited in the executive office as well,” he tells me.

But are they just excited about technology for technology’s sake?

The Explorer edition of Glass costs $1500, which Smylie says is comparable to the high-end HD cameras they would otherwise be using. For Capriotti’s, the camera has been the most useful function so far, but Glass may not be a unique option for their purposes. For the same price Capriotti’s could outfit 7 employees with hands-free GoPro cameras that would serve the same functionality. With Glass, Smylie says, they are able negate the cost of a video team and any additional labor since the camera is worn by the trainer, something that they could also achieve with any hands-free camera.

It may be a bit gimmicky, but Capriotti’s use of Glass hints at some of the ways the technology can be used for education. What if Glass could be used to capture farming practices or connect new and experienced farmers in real time? The opportunities could be transformative for the agriculture industry.

Check out our recap of Agent Yum, a Google glass application that allows shoppers to scan food products in the grocery store to deliver GMO and antibiotic ratings, developed at Hack//Meat Silicon Valley.