Smart sensor technologies make it easier to seamlessly track things like our activity, air quality and heart rate from anywhere. Now, a new Kickstarter project is hoping to use sensors to improve your cooking. Range is a new smart thermometer and iOS app that measures temperature and sends real-time temperature update alerts to your phone. Created by Supermechanical, an Austin-based design studio and makers of Twine, the app also generates recipe graphs from temperature data to ensure repeatable results for future attempts. And for all you curious developers out there, yes, Range will have an open API.

Just stick the thermometer in your holiday turkey, for example, and set an alert for the desired temperature with the Range app for iOS. While you entertain guests over eggnog and hors d’oeuvre, the one-finger interface lets you set rising and falling alerts, graphs the temperature of your dish over time and alerts you when your bird reaches temperature. The app’s landscape mode, requested by data-driven brewers and chocolatiers, graphs time-temperature and overlays past runs of the same recipe.

The two versions of Range, Aqua and Ember, are constructed of food-safe silicon, and can withstand temperatures up to 450 degrees F. Aqua Range, which is intended for projects like candy making and beer brewing, includes a 6-inch rounded probe and three-foot cord. While Ember Range, which is suited to grilling, roasting and other carnivorous culinary pursuits, has a 2-inch probe and 4-foot cord. Both versions are expected to retail for $59. 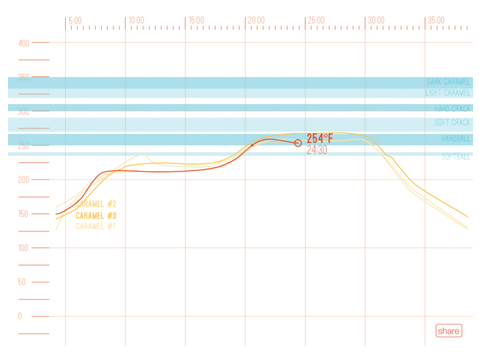 Following the Kickstarter success of Twine, a box that provides a simple way to “connect your things to the internet, without a nerd degree,” the team decided to take a similarly appealing UI (user interface)approach to a mass-market product. In response to a flurry of requests from Twine backers, they chose to tackle a kitchen-specific smart thermometer tailored to semi-pro cooks and enthusiasts. Digital thermometers are everywhere, but “there’s nothing out there that feels as good as my other kitchen tools,” says co-founder Kestner.  The team wanted to design something non-clunky, free of myriad wires and batteries that fits in with the rest of your everyday cooking tools, something you will fluidly reach for  that helps you track failures and successes and hone your skills.

Range is currently raising money through Kickstarter to fund development, enable fulfillment of minimum order quantities for components, and help secure production equipment. The team has prepped for a few different production scenarios and has already chosen suppliers, many of which they worked with for Twine. Most of the production is done locally in Texas or in the US (in the name of their carbon footprint).

After many iterations and prototypes, Range’s design is close to final and the app is “elegant and already looks at home in iOS 7,” according to their Kickstarter. They plan to finalize all aspects of the product in August, test the product in September, and by October, they hope to have a production-ready thermometer. In addition to inevitable production hiccups they plan to encounter, the team and product will be at “the mercy of Apple for approval in the App Store.”

Building On Top of Range

Range’s APIs will be openly available for developer’s use. Kestner envisions and slew of cooking apps that specialize in culinary subsets such as meat, chocolate and beer that would utilize user generated data to perfect recipes. He is working with some small batch producers to explore what makes their products replicable.

Learn more or donate here or check out their video below.