Two years ago at the first food+tech hackathon, myself, @nyculla, @mikeodea and @melissamcewen spent the day sketching out an idea for a digital tool that would help small farmers sell every part of their animals to a wider audience. The result was Groupme.at , an online marketplace for the group buying of whole animals. 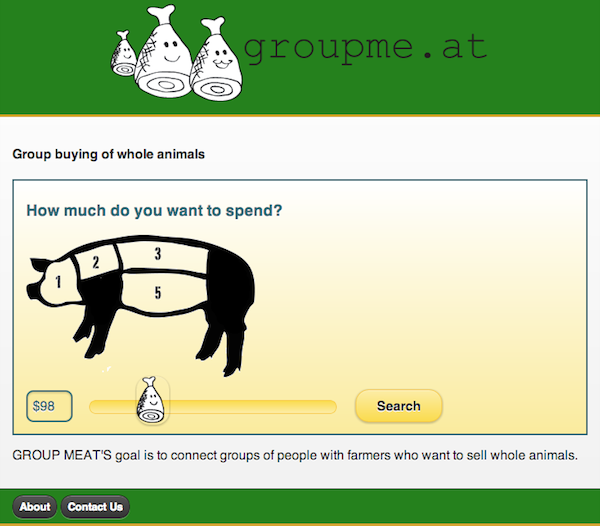 GroupMeat was conceived as a platform where farmers could sell a whole animal for a single set price, and customers could purchase a fractional share of that animal.  The software would coordinate all of the other logistics. It would figure out the best way to turn your fractional animal share into the cuts of meat that you would want. It would find farmers based on your location and ethical preferences. It would create custom cut sheets for processors based on a group of consumer’s specific needs and wants. It would auto-calculate pricing, pre-print shipping and packaging labels, and have insight into the shipping and delivery process. And most importantly, as a software solution, it could easily scale to small farms and consumers across the entire country. If you had an Internet connection, you could use GroupMeat.

But as we researched the industry in the days and weeks after the hackathon, we realized our idea was too ideal, and in reality, it’s a much harder problem to solve.

First, we underestimated the complexity of butchering. We started with pigs, and it turns out there are thousands of ways to butcher a pig and it’s not just based on anatomy, but also on factors like culture or seasonality. I took a pig butchering class at The Meat Hook and learned how ham is cut differently in Spain, Italy and America because that’s just how things are done there. I also learned that where you separate a pork belly from the spare ribs depends on if you want a super thick pork belly or if you want to sell spare ribs. This decision is often made seasonally as thick pork belly sells well in cold weather, but spare ribs sell well in the warmer, barbecue-friendly months. A butcher knows these things from years of cutting, selling and talking to people, and if our software were to have this depth of knowledge, it would require a much more complex algorithm than we envisioned.

Next, we ran into logistical problems around meat processing. We wanted to give slaughterhouses and processors custom cut sheets, but it turned out that most of them just have an in-house way of doing things, and you get what you get. Also, different processors offer different services. Some will just slaughter and process the animal, but some will take the extra time and smoke your bacon or sausages. Some will ship directly on your behalf, and some won’t. Some book months in advance so you can’t schedule time with them easily. Our software would also require these facilities to use some form of digital device as part of their workflow, and we found many folks ran their business just fine using a landline and a pad of paper.

These obstacles hindered and, eventually, stopped our development of GroupMeat. It became too much for any of us to tackle in our spare time, and some of the solutions we talked about (e.g. a custom internet-friendly slaughterhouse) would require too much capital or would only serve a small region.

I’m still convinced there are many different ways we can disrupt the meat industry using software, so maybe it’s time to rethink GroupMeat. Perhaps it could be a subscription meat-of-the-month club. Or a custom ordering system for small-scale, local butcher shops. Got any ideas of your own? If so, send me a note on Twitter. Maybe we can hack on them at the upcoming Meat//Hack event.

Will Turnage is the Mobile App Creator of Ratio & Bread Baking Basics. By day, Will is the VP of Technology & Invention at R/GA , but after hours he makes digital products, cooks food and finds new and interesting ways to combine the two.  He lives in Brooklyn with his wife, a garden and a bee hive. Follow him @wubbahed.