Americans may be spending less money on food, but dollars saved are just being spent on the resulting costs of poor health that plague the nation.

What America Spends on Groceries, the most recent article in NPR Planet Money’s Graphing America series, highlights how American spending on food has shifted over the past 30 years.  According to data from the Department of Labor, we spend significantly less money on our food today than we did in 1982. The single largest category of spending is on processed food and sweets, which accounts for 23 percent of total grocery spending in the United Sates. In comparison, we spent 11.6 percent on processed food and sweets in 1982. 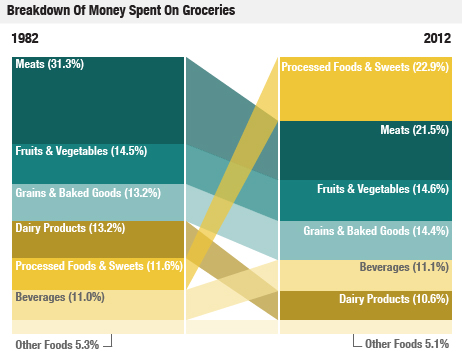 “We Americans still pay relatively less for food than anywhere else because so many of the costs of industrialized food production are “externalized.” We pay for them, but not at the grocery store,” writes author and professor of nutrition Marion Nestle in a 2011 article for her San Francisco Chronicle Food Matters column. These externalities, argues Nestle, include human, environmental, safety, and healthcare costs.

Two-thirds of adults and one-third of children in the United States are overweight or obese. Many researchers attribute the rising obesity and diabetes epidemics to increased consumption of processed foods and sweets, in addition to other factors like decreased exercise and high-calorie school foods. These foods are chockfull of ingredients derived from commodity crops, made artificially inexpensive through government subsidies.

The result? Annually, $192 billion is spent on obesity-related illness treatments and businesses loose an estimated $4.3 billion to obesity-related absenteeism. It is becoming increasingly clear that the health of our nation is directly tied to the farm bill.

To that end, sustainable food advocates like Nestle, Michael Pollan, Mario Batali, Dan Imhoff, and Anna Lappe are calling on the public to sign a letter that urges congress “to redirect a portion of the crop insurance subsidies into vital investments in nutrition, healthy food and conservation.” You can sign the petition here.

The following infographic from TakePart highlights the impact of federal corn subsidies on food prices.

[For more graphics that visualize the impact of the farm bill on federal support for healthy food check out Cotton vs. Carrots, Farm Bill of Health and Plant the Plate.

This infographic from Participant Media looks at some of the hidden costs of the farm bill and their affect on our health.