Crowdsourcing restaurants recommendations and reviews is nothing new in the world of food and tech.  Yet, consumers are faced with the taste conundrum – how do I know this reviewer’s tastes match my own? While many companies are jumping on the costly algorithm bandwagon to address this problem, Real Cheap Eats leverages the versatility of blogging as a content platform to help users find cheap eats in New York. Using the power of collaboration, Real Cheap Eats went from zero to launch in under two weeks, with no funding, and it is by far the best cheap eats resource in NYC. The ultimate in lean startup prototyping.

[Disclaimer: Veronica Chan conducted this interview and is also a contributor to Real Cheap Eats] 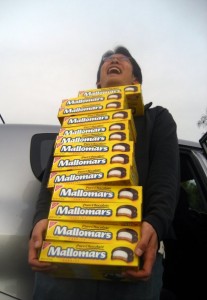 James Boo:  An interesting question came up at Food 2.0, during the panel discussion on “the future of food reviewing.” Pointing out that the discussion was dominated by the idea of data mining or socially networking individual preferences, one audience member posed the question: What will happen to food bloggers as “food discovery” apps become more sophisticated?

As a food blogger and editor, I’ve always felt that relevance is not always synonymous with customized recommendations on the “best” food. Relevant content just as often takes the form of stories or reviews that inspire readers to step outside their comfort zone and try something different, to learn a thing or two about food culture, and to experience diversity through taste. For those who agree with me, there will always be a place for good food blogging, especially in a city like New York.

What I’m trying to do with Real Cheap Eats is identify the common denominators — affordability and the local experience — that can act as a clear path to the established but far-flung content of our food blogs. Serious Eats, for whom I write regularly and proudly, has this type of approach nailed. Real Cheap Eats provides a more constrained filter.

VC:  So, how is this guide different from any other blog, aggregator or cheap eats list?

JB:  This guide is not interested in the one $14 dish at a $25-per-meal restaurant. We focus mostly on dishes that cost $10 or less, at places that are more or less consistent with this price point. Many of our recommendations cost $5 or less. We also don’t filter our coverage through news hooks; as a result, you’ll see just as many New York classics and far-flung discoveries as new players or novelties.

Real Cheap Eats is not a content aggregator. We have a brand built on collaboration, not on the power of an established brand to re-tweet the world or entice bloggers to give up their work for free. Zagat is currently asking bloggers to contribute original content for them in exchange for “exposure.” Citysearch launched a cheap eats site three years ago (to which I contributed); it died within a year because it was little more than a referral page to Citysearch. Bigger brands and publications have been extracting the efforts of independent food bloggers without a very compelling effort of their own long enough.

On the other hand, would-be food writers with blogs are not journalists, and due to lack of experience can be shut out of publication-based food writing. There’s often little incentive for us to refine our work editorially. So, while more and more businesses are recruiting blogger talent, there’s still room for us to step up and do better by ourselves. This is about placing a value on our work. It’s also about backing up that value with something real. 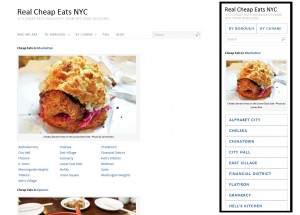 VC:  This is not a very tech-oriented product, but what role does development have to play in the site?

JB:  My top priority is usability, which involves a certain amount of front-end consideration. It’s a pain to read most web-based food guides, because many of them are poorly designed or designed to maximize page views.

In producing Real Cheap Eats I put mobile usability at the top of our list. With zero resources to build a native app, my two front-end developers spent less than two days building an adaptive display that changes according to the size of your browser. When you load the site on an iPhone or Android phone, CSS3 media queries tailor the size and form of the site to the size of your screen, giving you more touch-friendly navigation and freedom from scroll bars. You can see this change take place instantaneously by reducing the size of the browser window on a notebook or desktop computer.

The result should be a clean, smooth user experience that never asks you to click on something unless there’s a perfectly functional reason to do so. I’ve been surprised by how quickly non-techies notice the impact our design has on their usage; while it’s not as seamless as I’d like, the value of usability is there.

VC:  Did anything else surprise you in the development or launch of the guide?

JB:  The collaborative drive of our team was stronger than I ever could have imagined. Real Cheap Eats took about two weeks to go from conception to launch. Thanks to WordPress’ CMS, Google Docs, a keep-it-simple approach, our collective blogging expertise, and pure motivation, the entire product was launched in one iteration, and all in the free time of bloggers who have day jobs. I will always be amazed that we were able to pull this off under such severe resources constraints. It’s a testament to the gumption of a good blogger, and the guide would be nothing without serious effort from its contributors.

VC:  Do you have plans to monetize Real Cheap Eats?

JB:  The content of the guide, like the content of its contributors, will always be free on the web. That said, I’m looking into options for building a full-fledged application, which at the very least would allow users to cope with the fact that the New York Guide will have something like 300 entries in the summer of 2012. The added functionality will probably be a natural place to begin charging for the service, but I’m only really interested in doing so if we can keep the guide ad-free and as user-friendly as it is today. I’m also going to be investigating the possibility of expanding our brand to other major cities, starting with Los Angeles and the San Francisco bay area, my old stomping grounds.

JB:  It is, and it’s beautiful. I doubt Real Cheap Eats would be classified as “$10 or less” in an L.A. edition of the guide. But it would involve a hell of a lot more tacos. I’m really looking forward to having “tacos” as its own category, right up there with “not sandwiches.”