Like our past overuse of credit cards and our habit of buying homes priced far beyond our means, the great excesses of the American diet have too been part of a national denial.  Sold on soda, chips and hamburgers, we have eaten too much (and of the wrong things) for too long, and claimed our diet was still healthy and nutritious.

But a new study released in September by the USDA reveals that perhaps the reality of what we eat is finally hitting home.  Over the past twenty years, the American public has actually changed its perception of our diet, opening the door for educational opportunities to continue the trend.

How Americans Rate Their Diet Quality: An Increasingly Realistic Perspective shows that in the past “research has shown that consumers tend to perceive that their diets are better than they are relative to widely accepted dietary guidance.”  Yet from 1989-91 to 2008, there was a “reduced optimistic bias in Americans’ views of their diets—and perhaps greater receptiveness to information about the relation-ships between diet and health.”

Importantly, these changed perceptions seem to be largest among Hispanics and people underweight, overweight (and obese) and those younger than 65.  The biggest changes also seem to be in those with a high school education and those with some college education. 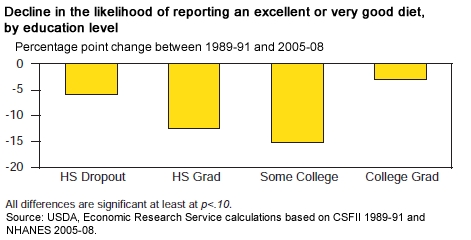 The opportunities for further education about foods eaten both inside and outside the home are abundant, since according to ERS’s Food Marketing System both industries are thriving.  Consumers spent about $1.24 trillion dollars on food in 2010. 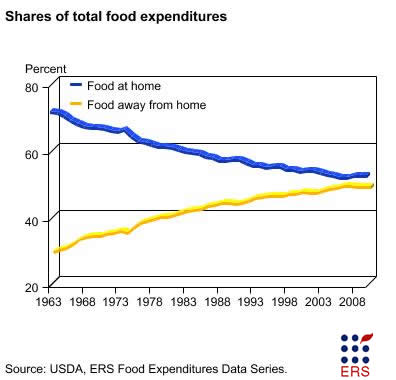 About the Author
Beth Hoffman has reported on food and agriculture for ten years, airing on NPR, The World, Latino USA, Living on Earth, KUER and KALW , and studied the food system in depth as a fellow and co-lecturer in the Africa Reporting Project at UC Berkeley’s School of Journalism. Hoffman competed a year long documentary project cooking with immigrant women in their homes, has traveled to India, Uganda and Ethiopia to report on rice production and chicken farming, and did a multipart series for KUER on the artistic, cultural and environmental connections we have to food. In addition to spending many hours on-farm in Utah, California and abroad, Hoffman also married into an Iowa farm family and is currently working with her husband to slowly convert the land into a sustainable orchard and hog farm. She currently lives in Albany, California. Hoffman’s previous work can be found on her website at bethaudio.com.
Previous Next
American Diet, business idea, ERS, food marketing, Food Marketing System, food startup, food tech, health, hispanics, How Americans Rate Their Diet Quality: An Increasingly Realistic Perspective, USDA