Michael Lavalle on Hacking the Food System: Buckle Your Seatbelts 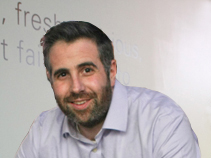 I’ve never been on a food rollercoaster, but I imagine if one existed, it would last ten years and take place from 2011-2021.

Much like the Arab Spring spreading across the Middle East, a youth driven movement has emerged in the United States dedicated to bringing the consumption of food back into the home.

These new change-makers are smart, moving fast and having a real impact. From web-focused solutions harnessing the power of digital information to rooftop gardens creating uber-local produce, an assault on the entrenched food status quo is gaining momentum.

As the movement gains strength, governments and big corporations will prove to be vital allies because they have no choice. There is only one option for them, and it’s to join us. As with any youth and minority driven rebellion, the initial rounds will be tough, and a small group will bear the burden of the whole. This is one of the responsibilities of our generation.

We’re just starting to climb this hill, so when you see one of your friends fighting the good fight, urge them on. And then start climbing with them. The way to hack the food system is with people and passion, and we need even more of both.

Michael Lavalle is the Co-Founder, Gojee.com Mike is the co-founder of Gojee.com, a recipe discovery site that curates content from food writers across the world and gives you targeted suggestions based on what you have at home. In past lives he was a soldier and a banker. He blogs at www.warandtheentrepreneur.com.