Greetings to all you fellow urban gardening enthusiasts. After last weeks’ five part series about the mapping system we built at GitC, it is pretty nice to get back to a simpler idea. I will be reviewing the iPhone app,Potted Garden. Potted Garden is currently on version 2, the original being MacetoHuerto, which was then updated and luckily translated for all of us english speaking gardeners out there. The company, also by the name MacetoHuerto, has a website that seems to be spun off of their success with the iPhone app.  They have created a blog, that has even more information, including a huge section of videos. (You will have to translate the page, which is simple in most modern browsers, if you don’t read spanish). 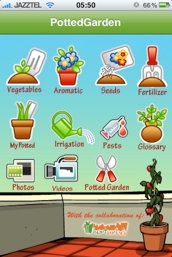 Two weeks ago, I discussed Find Fruit which is a very hands on, “lookup fruit. Go find fruit. Enjoy.” type of ordeal. Potted Garden is something that you will want to sit down with on a rainy Saturday or while in an airport, and spend some time with to absorb all of the information. In short, it is a vegetable encyclopedia of sorts. You can look up information in several topics, such as individual vegetables, pests, seeds, irrigation, fertilizer, and find a huge amount of data, laid out like a rolodex.

There are other sections, including a section to let you upload photos to their app, though I don’t know if this will get that much use.  There is also a section called “My Potted” that let’s you add tasks, such as watering the plants, fertilizing plants, or anything you want.  I added a task to try it out, and it gives you a notification symbol to remind you of the task when you close the program and return to the home screen.  Now, I am not sure if it is a bug, but even after “finishing” my task, the notification is still on the screen. There is also a video section, that has about 20 videos ranging from harvesting cabbage to building a compost corral.

While almost all of this information can be found out there on the internet, I do really like the way this is laid out and how much information is there.  For instance, last year John had Aphids amongst his plants. He could have easily opened the app, looked up Aphids under pests, and read more information, and even seen pictures of them. For $1.99, this is really a good deal, for how much quickly-gained knowledge you can get out of this. Granted, you have to be a gardening fan to enjoy it, but I mean – isn’t that why you are here in the first place?

About the Author
Bob Wall is a software engineer, videographer, and artist. He holds an undergraduate degree in Computer Science from the Shippensburg Univeristy. He currently lives in San Francisco, CA where he enjoys playing raquetball, running, and tennis. His artisitic work can be seen at his website ohSanFran.com which he created as an artisitc outlet for him and some fellow artists when he moved out to California. Some of his work, including a Swings Happiness Project, has been picked up by the Wooster Collective, urlesque, and the Prince of Petworth, and he was invited to give a speech at a TEDx event for the project. As a contributor to Grown In The City, he is most interested in sharing his knowledge about the intersection of Urban Agriculture with Computer Technology.
Previous Next
apps, bob wall, food tech, food technology, iphone app, itools, Mobile, potted garden, urban agriculture