Commodity Cropism: The Data You Don’t Have About Your Food

Question: How many of the foods that you regularly eat contain corn, soy, and/or sugar?

Answer: Most likely every packaged food, including organic products.

Surprised by that answer? Don’t be. Food labels tend to be written in another language- one that is clearly not taught in school, given the United States’ obesity and diabetes epidemics.

While startups such as Fooducate and Shopwell have created tools to help streamline the process of navigating these labels, the underlying problem- the lack of transparency regarding ingredients- has yet to be meaningfully addressed.

Media artist and Eyebeam Resident Stefani Bardin is outraged by the way that nutritional information is currently obscured and delivered, which causes detrimental effects to our health and the environmental. Her latest project, Commodity Cropism, a multi-channel video installation, uses stylized commercials to “expose veiled information” about the darlings of industrial agriculture: corn, soy, and sugar. The project also seeks to arm the public with data left out by “loosely monitored food production and labeling systems.” The installation includes three videos (below) each chock-ful with fascinating statistics about the three monocrops.

In our interview, the ever-provacative Bardin talks about her project, what the process of finding ingredient data is like, and why we should all care.

How does this change the way you think about your food and your access to information about it?

Danielle Gould: What was the inspiration behind Commodity Cropism? 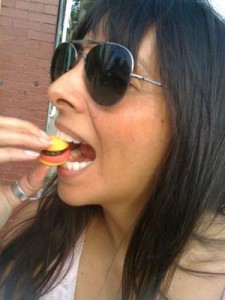 Stefani Bardin: The Corn chapter in Michael Pollan’s book The Omnivore’s Dilemma pushed me over the edge.  I’ve known explicitly about the problems of genetically modified corn since Critical Art Ensemble did their terrific project Free Range Grains but it was reading about the pervasiveness of corn in our food and how it’s subsidized by the government and then exploited by monoculture and industrial farmers that sent me into a tail spin.

I started looking into the Farm Bill – which is written in hieroglyphics and needs at least 10 separate lexicons to decipher – and it became apparent that big business is profiting big time on commodity crops that are not only bad for our health but also bad for our environment.  Not to mention the fact that the government primarily turns a blind eye at all of this malfeasance.  It made me furious.

DG:  Is there a particular reason you’re focusing on corn, soy, and sugar?

SB: In the current iteration of the Farm Bill (2008-2012) $42 Billion dollars is allocated to subsidized crops including corn and soy.  Less than half that amount goes to sustainable and organic farming models. These crops are now found in some form in almost every processed and packaged food on supermarket shelves.  Including health food stores.

Soy is even more problematic than corn because it contains phytoestrogens which when eaten in abundance cause endocrine disruption and interferes with male fertility.  Not to mention digestion problems for many people.  And sugar is just as pervasive – in every form and iteration. Now labels can distribute the amount of sugar listed in a product as long as it appears under other names like dextrose and maltose.  This “added sugar” is problematic in all of its forms – especially since it’s hard to decipher how it exists in the product.

DG:  On your site, it says that “this project seeks to expose veiled information about these crops and provide the public with data left out or obscured by loosely monitored food production and labeling systems.” Why does this information need to be exposed? In what ways do you hope the public makes use of this data?

SB: I think this data needs to be exposed because the government is doing a horrible job of regulating the information that goes on our packaging.  This is a direct quote from the website of the FDA = the Food and Drug Administration:

Under FDA’s laws and regulations, FDA does not pre-approve labels for food products.

How insane is that?  It means that companies can use terms like “all natural” and “good for you” without having any nutritional or scientific merit.  It’s dangerous and people with jobs and families and a host of responsibilities just don’t have the time to investigate these claims that are largely unjustified and potentially harmful.  The public should be able to avail the cleanest, clearest and most accurate information about the food they’re buying without having to spend hours on the internet trying to figure out what’s in their food.

When I was investigating the ingredients of Gatorade for another project of mine, it took me close to three hours to research exactly what those 11 ingredients are, where they potentially come from and what kind of research has been done on health and environmental impact.  And for one of the ingredients “artificial flavor” there is a 100% data gap because companies are not required to divulge the contents of these ingredients due to intellectual property rights and/or protection under the parameters of Confidential Business Information regulated by the United States Securities and Exchange Commission.

Who the hell has time to do this kind of research?  I’m doing it as part of my practice – but nobody has this kind of time to investigate their food – most people barely have enough time to shop for and prepare meals for their families.  There is something wrong with this current paradigm if it takes longer to research what’s in our food and where it comes from then it does to cook it.

I’m not an expert but it seems that there is more protection and support for big business than there is for the consumer when it comes to our food. Perhaps people will collectively start to demand more transparency and stricter guidelines for their food if they begin to see how imbalanced this system really is. This is directly related to a project that I’m doing with Brooke Singer called The Counter Kitchen that addresses these themes in food as well as personal care products.

DG:  How did you find the data and what was the process like?

SB: I love corn – every variety of corn and corn product you can think of I will eat.  In abundance.  So it’s a crop I’m very interested in. I started doing more research and found that that manufacturers have figured out a way to turn corn into a multitude of food additives that are then hidden behind such names as dextrose and guar gum and citric acid.  They are cheap to produce, have a shelf life of one billion years and contribute no nutritional value to the food. And yet the FDA does not require manufacturers to reveal where the ingredients on packaged food comes from or how they’re made.  I discovered these other monikers for corn from websites for people with severe corn allergies who had to do their own form of detective work to uncover this information.

For a brief time I was a strict vegetarian and I used to eat and drink a lot of soy products, especially soy milk.  Then I read an article in Utne that made so much sense to me about how soy is positioned and peddled in the marketplace vis a vis health and nutrition and that too much of it is bad for us and now it’s in everything. I recently spent an hour in my local health food bodega trying to buy some cookies or chocolate that did not have soy lecithin as one of their ingredients.   It was shocking – even the locally sourced “artisanal” chocolate had soy lecithin in it.  It’s not that soy lecithin is necessarily bad, in moderation it’s more than fine – but why does it have to be in everything I purchase?

DG:  Why did you choose to use “highly stylized” commercials and video as a medium for exploring industrial agriculture?

SB: Mainstream media outlets have, unfortunately, positioned themselves as the authoritative voice on everything.  If we see or hear something on television then “it must be true”.  I’m culture jamming the medium in an attempt to illuminate the problematic nature of this information delivery system.  Commercials are often flashy and/or commanding in an attempt to convince viewers how valuable and necessary their product is. I’m poking fun at how lame and overly produced and stylized these commercials often are at the same time I’m trying to call attention to information that is often suppressed or marginalized in mainstream outlets.

DG:  What kind of reactions have you received?

SB: People seem to really like the videos = as much for the platform as they do the content and I’m very grateful for that.

My favorite responses have been those of shock and surprise – especially when viewers find out the myriad and spectrum of products that contain soy and corn.  There has also been a lot of solidarity regarding how pervasive Monsanto is and really understanding what a problematic and monolithic corporation it is.  I hope people will start to convert their anger and frustration into action and stop buying all the crap that Monsanto produces. The power that consumer spending habits wield in terms of changing policy is woefully underrated and underreported.

The Monsanto website says if they had only one word to describe themselves it would be “farmers” – because they (Monsanto) create the “seeds, traits and protection chemicals that help produce more food using less resources”. First of all it’s complete bullshit since industrial farming uses way more energy and produces way more toxic byproduct than more sustainable and biodynamic methods of farming.  Second, Monsanto is only interested in farmers who buy and use their products – they have and continue to sue and ruin family farms who have had the misfortune of having Monsanto’s patented GM Roundup Ready Seed accidentally blow onto their land from neighboring farms or off of Monsanto trucks driving through their area. It’s greenwashing at its most perverse.

DG:  What do you find most exciting about the way that technology is being used to disrupt the food system?

SB: There are some great media and technology projects that speak to the dysfunction of our food system including work being done by the collective Superflex and their project Guarana Power which is about utilizing economic structures to balance the scales between local farmers and multi-national corporations.  The work being done by Future Farmers uses hands on technologies and incredibly smart design models to articulate and mediate many of the problems within our food system.  The writings and projects of Claire Pentacost and Hernani Diaz is using the arduino/sensor platform in his project Re:Farm the City to make it very easy for urban gardeners to maintain all of their vegetation from small pots of herbs to large plots of land.

There’s also a lot of really strong journalism – mostly online – that’s addressing the problems as well as the successes within our food system including Nicola Twilley’s site Edible Geography, the Center for Food Safety as well as your site.   Food is definitely “the new black” and I’m thrilled that so many are now producing and enjoying really amazing things to eat.  It’s my hope that more individuals will also take a stand against some of the really ghastly mechanisms of food production and clear the fields of corporate dominance in order to return our food system back to the people.

About the Author
Danielle Gould is the founder of Food+Tech Connect. Connect with her on Twitter, Google+, or Linkedin.
Previous Next
commodity cropism, data, farm bill, michael pollan, open data, stefani bardin, video