iTools: i got. you got-The Backyard Food Garden Exchange.

You are growing, growing, growing. But alas, you have 80 plums, and no lettuce.  What do you do? Well, you can set them outside of your apartment and hope they magically get traded for a bowl of greens, or you can log on to igotugot.org and trade them with another urban gardner for a nice batch of arugula.

The premise behind this site is easy – it’s social networking for urban farmers hoping to move their bounties. I love the concept, but most of all love the simplicity. Go to the site, enter your zip code, and you will see listings from within 100 miles.

I Got
I’ve got some extra artichokes and onions, might even have a few tomato and corn plants available.

You Got
Strawberries, blueberries, spinach, carrots, radishes or tomatoes.

Get in Touch
Reach me on Twitter at @DanDawson

How simple is that? Adding your items is just as easy. You list what you have to offer and what you would like in exchange. You can then list your contact information, and any tags you want to associate with it, such as beans, fruit, etc.

The site has nothing but some grass, a sun, and you. It is beautiful in it’s simplicity, yet it’s still stylish. If only craigslist were this easy.

*** Editor’s note: igotugot.org was built during the Hack for Change hackathon hosted by change.org. 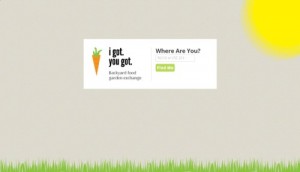 About the Author
Bob Wall is a software engineer, videographer, and artist. He holds an undergraduate degree in Computer Science from the Shippensburg Univeristy. He currently lives in San Francisco, CA where he enjoys playing raquetball, running, and tennis. His artisitic work can be seen at his website ohSanFran.com which he created as an artisitc outlet for him and some fellow artists when he moved out to California. Some of his work, including a Swings Happiness Project, has been picked up by the Wooster Collective, urlesque, and the Prince of Petworth, and he was invited to give a speech at a TEDx event for the project. As a contributor to Grown In The City, he is most interested in sharing his knowledge about the intersection of Urban Agriculture with Computer Technology.
Previous Next
apps, distribution, food tech, food technology, igotugot.org, Mobile, social network, urban agriculture