As part of the agricultural sustainability movement, backyard, urban, and rural gardeners and farmers are increasingly attempting to grow polycultures.  Permaculture guilds are designed polycultural systems, composed of plants, animals, fungi, and other organisms that grow particularly well together.  Perhaps the oldest and best-known guild is the Three Sisters, which consists of corn, squash, and beans and has been grown throughout Mesomerica for thousands of years.  The corn acts as a pole for the climbing beans, bacteria in the beans’ roots fertilize the corn and squash, and the squash acts as a shade structure for the roots of all three ‘sisters,’ keeping their roots cool and holding moisture in the soil.

If you’ve ever braved Permaculture guild design, you’ll know it’s challenging.  That’s because designing guilds isn’t about selecting individual crops, but about curating meaningful relationships between organisms.  It’s about designing complex adaptive systems, in this case, agroecosystems.  Designing agroecosystems requires systems design tools, tools that enable us to understand, design, and manage human and naturally systems in a more holistic way.  So, what would a design tool for curating meaningful ecological relationships look like?

A decade ago, inspired by this question, I conceived of a web-based application for designing Permaculture guilds.  I solicited a team of developers, secured funding, and began project managing the development of the application, which was dubbed (now embarrassingly) the Permaculture Information Web.  And thus were planted the seeds of awesomeness.  But in time, I meandered off to grad school, funding dried up, and the project has since been cryogenically frozen.  That is, until there’s interest in unfreezing it.

In the interest of a potential resuscitation, here’s the vision.

My intention for the application is to enable gardeners and farmers, rural and urban, to design and grow Permaculture guilds.  The interface of the application would be similar to those of concept-mapping tools, which allow users to explicitly define and interact with relationships between components.  Although it’s not quite a design app, I’m thinking in terms of Thinkmap’s Visual Thesaurus, an online, interactive thesaurus.  When word is entered, say network, it becomes orbited by its synonyms, which are closer or farther away from the original word based on how close or far away they are in meaning.  When one of the synonyms is clicked, it too becomes orbited by its synonyms, and so on, enabling an exploration of language as a complex web of interrelated meanings. 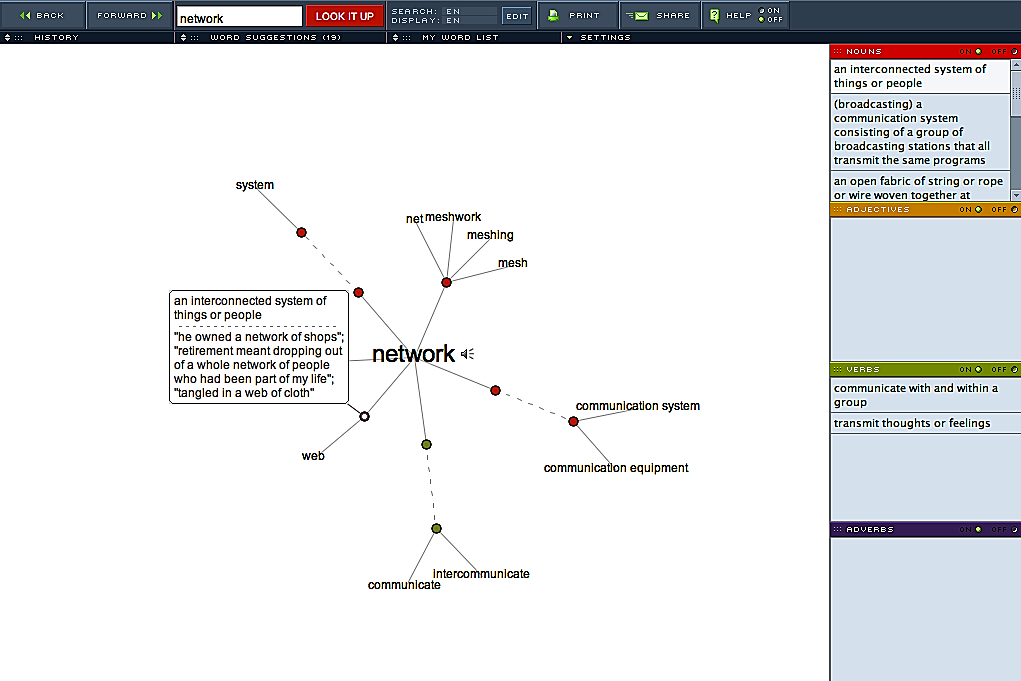 Similarly, designing a Permaculture guild is less compatible with ‘looking up’ companion plants individually and moreso with exploring webs of interrelated organisms.  In terms of user experience, users would begin by entering settings, denoting their constraints and preferences, e.g. climate zone, size of plot, preferences for food/medicinal crops, etc.  Based on these settings, as with the Visual Thesaurus, users would identify a core element, say a peach tree, which would become orbited by ‘synonymous’ i.e. companion organisms.  Clicking on different companion organisms would generate different polycultural configurations, enabling users to iteratively and experimentally design guilds.  Clicking on a link between organisms would elicit information about the ecological relationship between them, nitrogen-fixing or otherwise.

Migrating this concept into the 2.0 era would allow users to create and edit information about these relationships, ‘follow’ other users with similar settings, share their guild designs, and even collaboratively design guilds.  See my geeky wireframe below, but imagine much more: concept-mapping tool meets Wikipedia for agroecology, with robust social network features.

Gardeners and farmers can certainly design guilds without the aid of software, but beyond guild design, this application would enable the crowdsourcing of information about polycultural relationships and the cultivation of systems thinking.  Take the idea to its fullest expression, and you can imagine a collaborative resource for relationship-based polycultural design and pedagogy. In short, a valuable manifestation of the Food+Tech vision.  I may soon pose this guild design app at an upcoming Food+Tech hackathon, and if you’re interested in its resuscitation, feel free to get in touch with me directly. 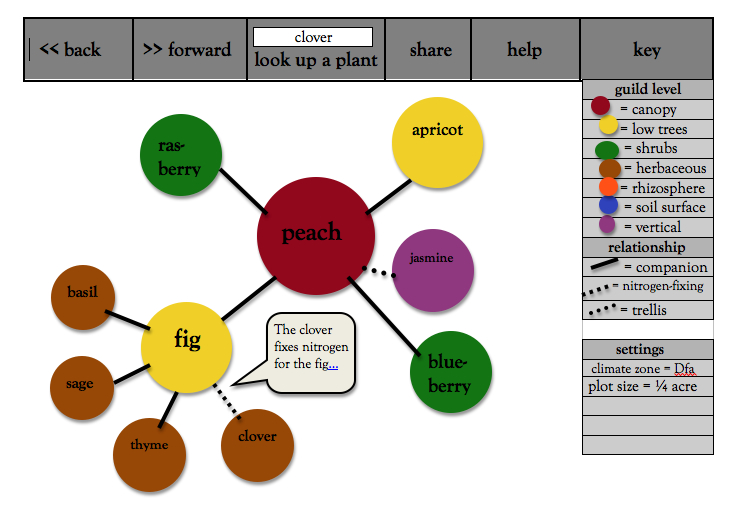 Ultimately, the matching underlying structure between online social networks and biological networks suggests an inherent compatibility between web 2.0 technologies and polycultural systems.  It’s therefore not surprising that 2.0 tools should be well-suited to the reality we’re trying to cultivate, both metaphorically and literally.  Which is precisely the focus of this series: how modern information and communication technologies can enable polyculturalism in the way that we design (Part I, here), eat (Part II), and buy (Part III) food and food systems. Stay tuned.

About the Author
http://www.stephaniegerson.com
Stephanie Gerson is a social media and innovation strategist. She has worked with a rotating exhibit of startups and social ventures, and is currently based at Purpose, builder and incubator of global social movements. As a Permaculturist, WIRED subscriber, and beekeeper who majored in Science, Technology, and Society (STS), worked on a biodynamic farm, and lived in an Earthship, Stephanie feels right at home at Food+Tech. Connect with her at @stephgerson and misstephanie.gerson [at] gmail [dot] com.
Previous Next
agriculture, food tech, food+tech, itools, Mapping, opportunities in agriculture, permaculture, stefani gerson, Tools, urban agriculture, web