My interview with Miriam Simun about her project making cheese from human breast milk, posted on both Food+Tech Connect and Grist, provoked a substantial amount of conversation. We are both fascinated by the range and quality of reactions, which ranged from disgust to interest in understanding the technical aspects and implications of production. Rather than letting the incredibly insightful conversation die in the comments section of the post, I asked Simun to respond to the questions you asked on both this site and on Grist. 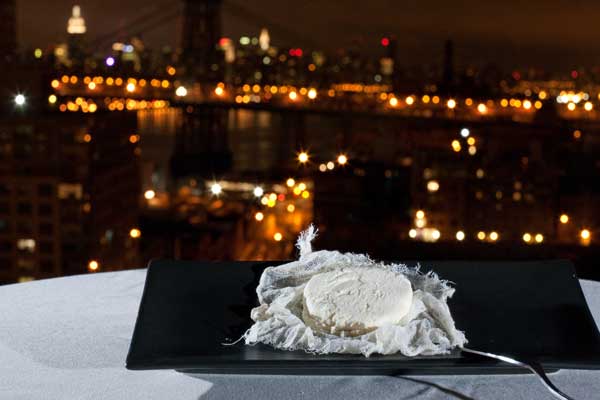 Danielle Gould: The posts written in response to our interview tended to elicit reactions  focused on the shock value of producing cheese from breast milk. How can Food+Tech Connect and other publications help move the conversation to questions related to the ethics of biotechnology and sustainable food production?

Mirium Simun: I’m not so sure that shock value, if used correctly, is such a bad thing.  Certainly there are plenty of very knowledgeable and thoughtful people out there working on issues of bioethics and sustainable food production.  But the discussions need a wider audience.  Shock is one way to bring new voices to the conversation. And how to move the conversation?  Set a thoughtful framing, ask the right questions, draw the important parallels. Deep in the comment sections, I uncover comments of concern about commercializing something that the human body produces – and comparisons to examples like a recently busted Thai baby farm where women were being held prisoners while their bodies were used to bring other peoples’ babies to term. If the shock of human cheese can draw light to the fact that we must to pay attention to the new kinds of production made possible with biotechnology, then to my eyes, the cheese has succeeded.  As a species, it seems pretty crucial to debate and create the future we want.  Cheese is just one way to enter this conversation.

DG: What are the most interesting things you’ve experienced or insights have you gained as a result of our initial interview?

MS: The vast, vast range of reactions.  I had a lot of questions when I embarked on this project, but the press and even more, the comments, has raised more questions and discussions than I ever imagined.  Goes to show that food really is a wonderful way to get people thinking and talking.

Suzy: I don’t find this shocking; rather, I find it light on serious analysis of the implications of food production. Why would it matter that the cooking pot was manufactured in NYC, for example? What’s “better” about “local” taken to that extreme? What’s the big deal about drinking cow’s milk and cheese, or other kinds of milk and cheese? Should that be some kind of concern to me?

MS: I’m not sure if it should be a concern.  I’m proposing that it might be worth thinking about.  And I’m certainly not trying to start a serious human cheese movement.  I can imagine a lot of ways that such a movement could go seriously wrong (just consider the surrogacy movement and where we have ended up – the Thai baby farm).

As far as the local cooking pot – local, as a movement for social and environmental change, will fail if it continues to be co-opted into not much more than a marketing badge.  If the move towards buying local is to have a real environmental and social impact, our modes and scales of production need to be fundamentally reimagined, restructured and reconfigured.  Perhaps for some human cheese can be a spark to fuel such a reimagination.

Aaron Andrews: You do realize the logical falacy in claiming that human cheese is sustainable, don’t you? Look at the numbers. 1 cup of cheese contains about 900 calories. It takes 10 cups of milk to make one cup of cheese, and 10 cups of human brest milk contains 1650 calories. Human brest milk production is 90% efficient, so the woman producing the milk must eat 1830 calories to ultimately produce cheese containing 900 calories. Half of the original calories are lost in the process! It would be much more efficient, and therefore sustainable, for those who want to eat human cheese to simply eat the food the lactating woman was going to eat.

MS: The reason that cheese made from animal milk is an efficient use of resources is that ruminants – cows, goats and sheep – can eat plants like grass that humans can’t digest and transform that into a food we can eat.

The livestock industry is a huge strain on our depleting natural resources.  That includes animals that are harvested for dairy. And humans, as well as urban inhabitants, are a growing population.  Some of those humans currently produce more milk than their babies can possibly drink – it’s an excess of production within the urban reproduction system.  Using this milk for cheese, moving forward, seems to me as the most sustainable solution – that is, if we must continue eating cheese.

Cara J: I’m all for challenging assumptions and examining norms, but still, when I read this, I kind of wish Miriam Simun would turn her effort and time toward sustainable food projects that might have a wider impact. I’m pretty certain human cheese just won’t ever break out of an ultra-ultra-niche group.

MS: There are a lot of talented people working on very important sustainable food projects that I fully support.  More people are needed to not only work on these kinds of projects, but also support them by committing to eat and live more sustainably.  I hope the conversation human cheese engenders might encourage someone to think twice about the food they eat and thereby the food systems they are supporting.

Jessi Monster: Too many people in this country look at breast milk not as a food (which is what it is) but instead as a bodily waste. They look at the act of nursing not as feeding a baby (which is what it is), but as a sexual act that needs to be done in bathroom stalls or under a blanket. Making cheese out of breast milk is a way of showing the world, ‘hey, this is just food, and there is no reason to be so uptight or grossed out about it’. If breast milk is a bodily waste, and nursing is a sexual act, who in God’s name would want to nurse their baby?

MS: Yes, exactly.  Breastfeeding is part of our nature.  It is also something we share in common with other mammals.  I’m interested in why this makes some people uncomfortable?

CurdNerd: What is used to coagulate, & what is the rate of flocculation? How about using some baby vomit to curdle the milk?

MS: I have tried using both traditional and vegetarian rennet to coagulate.  Flocculation rates vary depending on the different milks and blends, but it tends to be about 3-4 times longer than expected with just cow or goats milk.  Human cheese takes its sweet time.

Extracting coagulating agents from baby vomit is certainly an interesting idea.  It points to the largely unknown (and unspoken) fact that cheese has traditionally been made with the gastric juices of baby cows – calves that have been killed.  The enzymes in their stomachs are what is best suited to break down cow’s milk.  So cheese is certainly not always without the death of an animal.

More recently genetically modified rennet has became the norm for making cheese, especially on an industrial scale, as it is much cheaper.  GM rennet is basically the DNA of the enzyme produced in baby cow gastric juice inserted into a yeast cell.  Interestingly enough, for the most part cheese using genetically modified rennet is considered kosher (rennet is seen as meat, as it comes from an animal, and therefore shouldn’t be mixed with milk according to kosher laws).  So now we arrive at a place where the DNA of a cow is not considered to be part of an animal, according to an ancient religion.

This points to just how much our conceptions of nature are changing as biotechnology develop.  And the importance of a wider discussion around how we shift the frameworks through which we see the world as a result.  More of the human species need to be involved as we redefine what is living, and what is life.

Blairefromagier: Id try it. But really I want to know how like chemically she is able to make 100% human cheese? that is the most interesting question… at least to me. Miriam Simun how are you making up for the lack of Beta-lactoglobulin in human breast milk to allow for coagulation of the casein, to form curd from which to make the cheese 100% human?

MS: I have not yet made 100% human cheese.  I found a scientific article from the 19th century describing that human milk does coagulate with the right acid, and also with acids extracted from infant stomachs.  There are also possibilities to use contemporary chemical processes to concentrate the casein within the milk, which might help with coagulation.

Sarah: This is interesting my question is this: milk tends to have a flavor of whatever you ate, so that is one aspect you will never be able to control. Whereas with pasture raised dairy cows, you know what they are getting. How can you compensate for that?

MS: I’m curious about how you can be so sure about just what the pasture raised dairy cows are eating.  Sure, its mostly grass, but what else might end up in their mouths?  The other point is most cows are anything but pasture raised.  But also, why do we trust animal diets more than human ones – and just what does that say about what’s gone wrong with ours?  Perhaps eating your neighbors’ cheese might make you more concerned for the health of what is going into their bodies – and how we might be in some ways responsible for this.

Joan Savage:  HIV virus dies in a few hours after the host cell dies. Could pasteurized Maternal Cheese be a way an HIV-positive mother could nurture her HIV-negative baby without disease transmission? Don’t know. (in response to comment by Nhsolar guy:Human milk may confer some illness protection from mother to child, but it can also pass on some nasty diseases (HIV being the first to come to mind). It’s one thing for a mother and child to die of a disease, but a “product” like this could sicken a large group of people.

MS: Viruses are certainly very important to consider.  HIV in human milk is killed through flash-heating. The mothers that I work with are tested and have no human viruses communicable through human milk.  The milk is then sterilized as an extra precaution.