The Scoop: How Baby Gaga Fortifies the Human Cheese Conversation

A month and a half ago, I interviewed Miriam Simun about her project making cheese from human breast milk. The interview spread virally through various channels such as The AV Club, Gothamist, GOOD, and Michael Pollan’s blog, provoking a substantial amount of conversation. While the sensational nature of the subject certainly contributed to the spread, publications such as Grist and The Atlantic found Simun’s use of human cheese as a medium for exploring the ethics of biotechnology, sustainable food production, and the human body equally compelling.

This recent buzz offers an easy opportunity to revisit the conversation started a month and a half ago. The following is part 1 of a 2 part follow-up series with Simun. Below, Simun shares her thoughts on the implications of Baby Gaga ice cream. Check back tomorrow for part 2, in which Simun responds to the questions readers posed in the comments section of our original interview.

DG:  How do you feel about being compared to Baby Gaga ice cream? 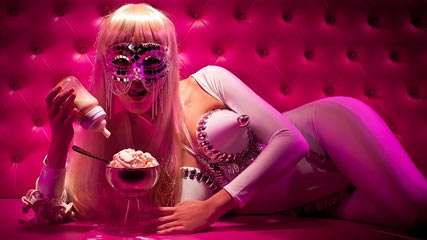 MS: With human cheese, I was proposing what it would mean for human milk to become a viable source of commercialized food production.  With the introduction of Baby Gaga ice cream, I suppose I don’t need to argue the viability any more…

The way Icecreamists have packaged their product with a hyper-sexualized marketing narrative explicitly points to my question:

How are human (female) bodies used as commodities, and as sources for commercial production?  How does the woman who sold them her milk to be turned into ice cream compare to the scantily-clad woman in a torpedo bra that is serving the ice cream?  Why is the uproar over women selling their milk so much louder than the conversation about women selling their eggs, or renting their wombs?

What I do find really interesting about Baby Gaga ice cream is that it has engaged the British Food Standards Agency. How will the legal system respond and delineate the acceptable use of bodies for food production?  I’m really curious to see what will develop.

DG: If you could, would you redesign the conversation surrounding the ice cream? How?

MS: As a conversation starter I actually think it’s pretty successful.  They have so over-sexualized the product that you can’t help but be made aware of the use of the female body to sell stuff.  And that the human milk ice cream is in a canister right next to the cow milk ice cream positions humans and other animals on equal grounds in an interesting way.  That the woman serving the ice cream is in her underwear and a feather mask, however, seems to put female bodies on the same lower level that we currently place animals – as bodies to be commercialized – rather than repositioning humans – all of us as a species – to be part of the lactating mammal tradition.

The fact that the news response has been so uncritical says a lot more about the state of our press and world than the shop itself.  But readers are sharp, and I only point you to one comment (from The Guardian website) to illustrate the success of the conversation it has spurred:

“CarefulReader
28 February 2011 5:30PM
My revulsion comes from the fact that she’s selling breast milk for pure commercial gain..Is everything in this world merchandise?”

DG: What do you think about their claim that the ice cream is organic?

MS: I’m dubious.  For dairy to be considered organic in the United States, the animal must be “fed and managed” 100% organically for at least one year prior to the production of milk. I wonder if the women providing milk can live up to that standard?

About the Author
Danielle Gould is the founder of Food+Tech Connect. Connect with her on Twitter, Google+, or Linkedin.
Previous Next
baby gaga, breast milk, human cheese, icecreamists, michael pollan, Miriam Simun