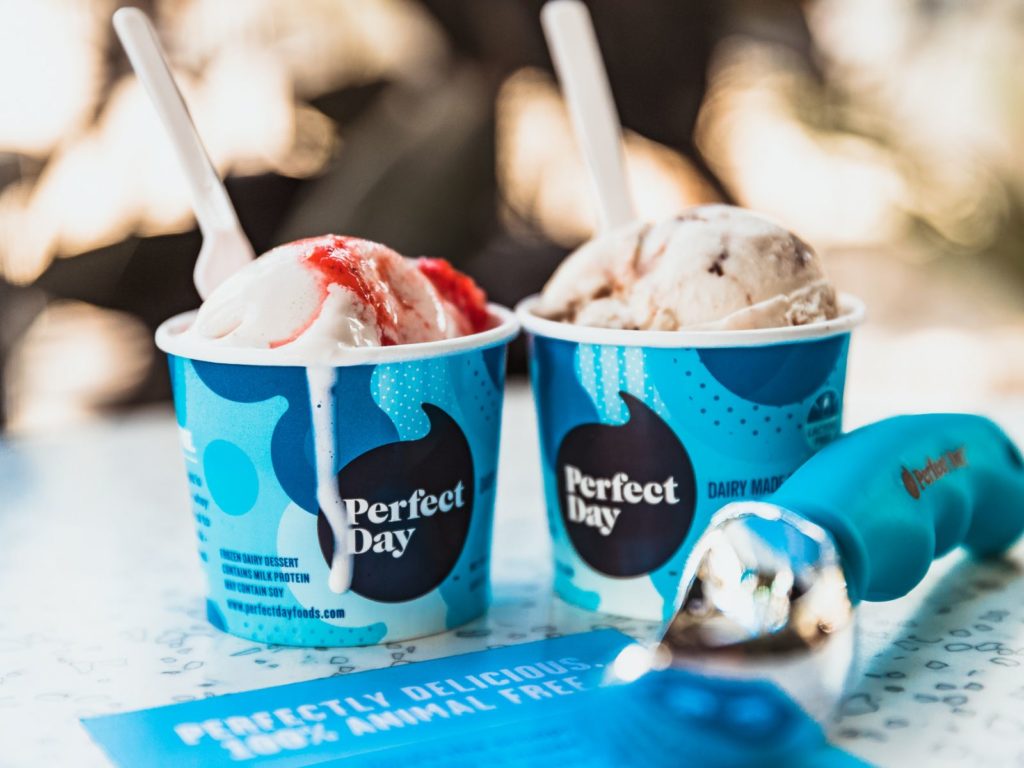 Meanwhile, Beyond Meat CEO Ethan Brown has hinted at developing poultry in 2020. Kroger is trialing dedicated plant-based meat sets within its conventional meat department in 30 stores. JUST has acquired its first manufacturing facility to reduce the cost of producing its plant-based eggs.

In other news, Delivery Hero is nearing and agreement to acquire Woowa for $4 billion. Spain’s Glovo has raised $166 million for its deliver anything app. Uber is in talks to sell its India Uber Eats to Zomato.

The investment was led by Temasek. Perfect Day plans to use this money to bring its product to market and add to its product portfolio.

Beyond Meat is pushing further past its plant-based beef and pork into poultry, and CEO Ethan Brown says that product line will finally get more attention in 2020.

Abu Dhabi’s Mubadala led the round. The round has pushed Glovo’s valuation past $1b. Funding will be used to achieve profitability.

The retailer has started trialing dedicated 3-ft plant-based meat sets within its conventional meat department in 60 stores in Indiana and Illinois.

The startup plans to introduce its cultured seafood to market within the next two years. It has also internally tested mahi mahi and red snapper.

JUST has acquired its first manufacturing facility: a 30k-sq-ft in Minnesota that will make more plant-based eggs for less money.

Unilever recently invested in The Hive, where it plans to develop new products, including plant-based meat and sustainable food packaging.

9. Uber Is in Talks to Sell Its India Food-Delivery Business to a Rival – Wall Street Journal

A deal would see Uber unload its costly Indian operations of Uber Eats to Zomato.

Andreessen Horowitz partner Andrew Chen led the round. Funding will go towards hiring up with the goal of reaching 100 campuses in 2 years.

11. Bushel Wants to Enhance, Not Disrupt, Grain Trading with $19.5M Series B – AgFunder

Continental Grain led the round. The new funds will be used to create new product lines and complete additional hires to run the new products.

DuPont is creating a new consumer goods giant by merging its food and nutrition business with International Flavors & Fragrances in a $26.2b deal.

Coventure and TCM Capital led the round. New funding will allow the company to go aggressively after strategic markets like Peru, Chile and Guatemala. Its online marketplace allows farmers to seek higher pricing from distributors.

The company raised more than $1.3m over two Kickstarter campaigns. It was able to bring a cost-prohibitive cooking technology down to an affordable price point, only to see the market flooded by competitors.

17. Amsterdam: Dutch Startup Meatable Is Developing Lab-Grown Pork and Has $10M in New Financing to Do It – TechCrunch

The company has raised $7m from a slew of angel and institutional investors and a $3m grant from the European Commission. The new cash will be used to accelerate the development of its prototype.

MindMed could have the key to providing the upsides of psychedelic drugs for both focus and addiction treatment—while cutting out the downsides of tripping. The company has raised $6m thus far.