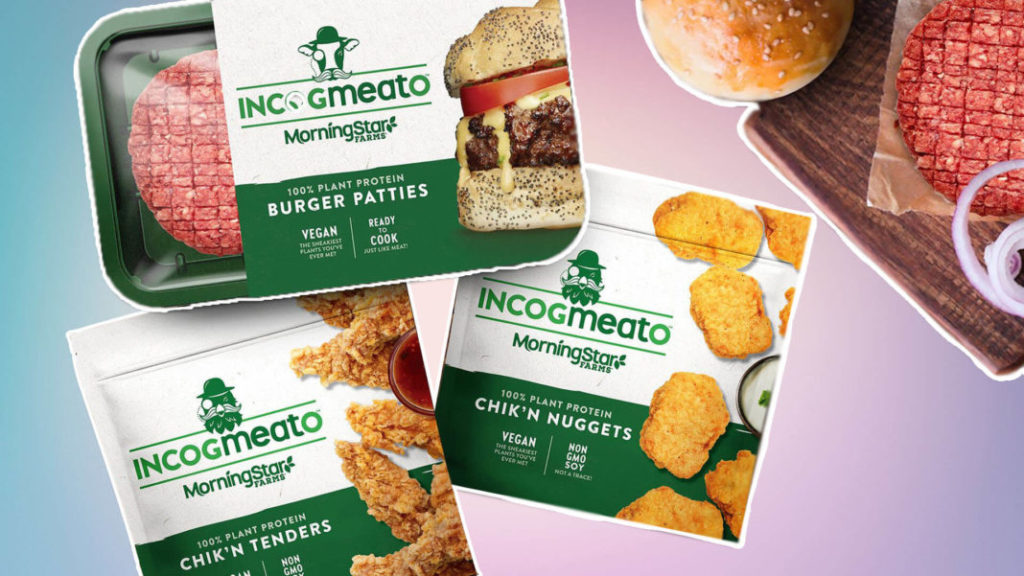 The leading US cultured meat companies –  JUST, Memphis Meats, Finless Foods, BlueNalu, and Fork and Goode – have joined to form the Alliance for Meat, Poultry, and Seafood Innovation.

In retail news, Bellwether Coffee has raised $40 million to meet global demand for its electric coffee roasters. Meanwhile, Amazon is testing a fingerprint checkout technology called “Orville” that aims to roll out in Whole Foods early next year.

1. Kellogg Plans Bleeding Burger as It Catches Up on Faux Meat – Bloomberg

Early next year, Kellogg’s Morningstar Farms will begin selling the “Incogmeato” burger: a plant-based, refrigerated patty made with non-GMO soy that is designed to mimic meat’s look and flavor.

After selling its stake in Beyond Meat in the spring, Tyson Foods’ next bet is on plant-based shellfish. Tyson Ventures is investing an undisclosed sum in New Wave Foods.

Hormel Foods is launching a non-GMO meat substitute made with soy protein that can be used in any recipe calling for ground meat under its new Happy Little Plants brand.

The new investment will allow Puris to more than double its pea protein production.

JUST, Memphis Meats, Finless Foods, BlueNalu, and Fork and Goode have joined to form the Alliance for Meat, Poultry, and Seafood Innovation. The group will lobby on behalf of cell-based meat interests and drive efforts to educate the public.

DBL Partners and Lyndon and Peter Rive led the round. The funds will accelerate the company’s efforts to boost incomes for coffee farmers, eliminate roast processes harmful to the planet and meet global demand for its electric roaster.

9. Canada: Terramera Raises $45M Series B on Mission to Reduce Chemical Use in Ag by 80% – AgFunder

Ospraie Ag Science and S2G Ventures led the round. Funding will go towards advancing Actigate, its targeted crop protection technology.

The six-year-old startup added its first city outside North America on Wednesday, launching in Melbourne and announcing plans to grow its business in Australia over the next year.

9. With Regenerative Agriculture Booming, the Question of Pesticide Use Looms Large – Civil Eats

Regenerative practitioners say that healthy soil eventually leads to reducing synthetic chemicals. But some advocates say those chemicals have damaging effects and should be addressed.

10. Bioenergy DevCo Captures $106M to Digest Waste in a City Near You – AgFunder

Newlight Partners led the round. In addition to fueling the completion of its first US facility in Maryland, the new capital will be used to help expand into other metropolitan areas.

Following on the heels of a partnership with FreshDirect, the round was led by Amerra Capital Management. The funds will lay the foundation for expanded processing capabilities and collaborative work with scientists to improve industry practices.

12. Yes, Give Your Fingerprints to Amazon for a Slightly Quicker Checkout at Whole Foods – Eater

The tech and retail giant is currently testing a system called “Orville” that allows Amazon Prime users to scan their hands to ring up a purchase. It’s currently being tested at its New York Office.

13. How the Trump Administration Limited the Scope of the USDA’s 2020 Dietary Guidelines – The Washington Post

The 80 topics that will be addressed exclude the health effects of consuming red and processed meat, ultraprocessed foods and sodium.

Join us at Regenerative AgTech on September 19th to learn about the state of regenerative agriculture and how technology is helping farmers regenerate their soils. RSVP here.