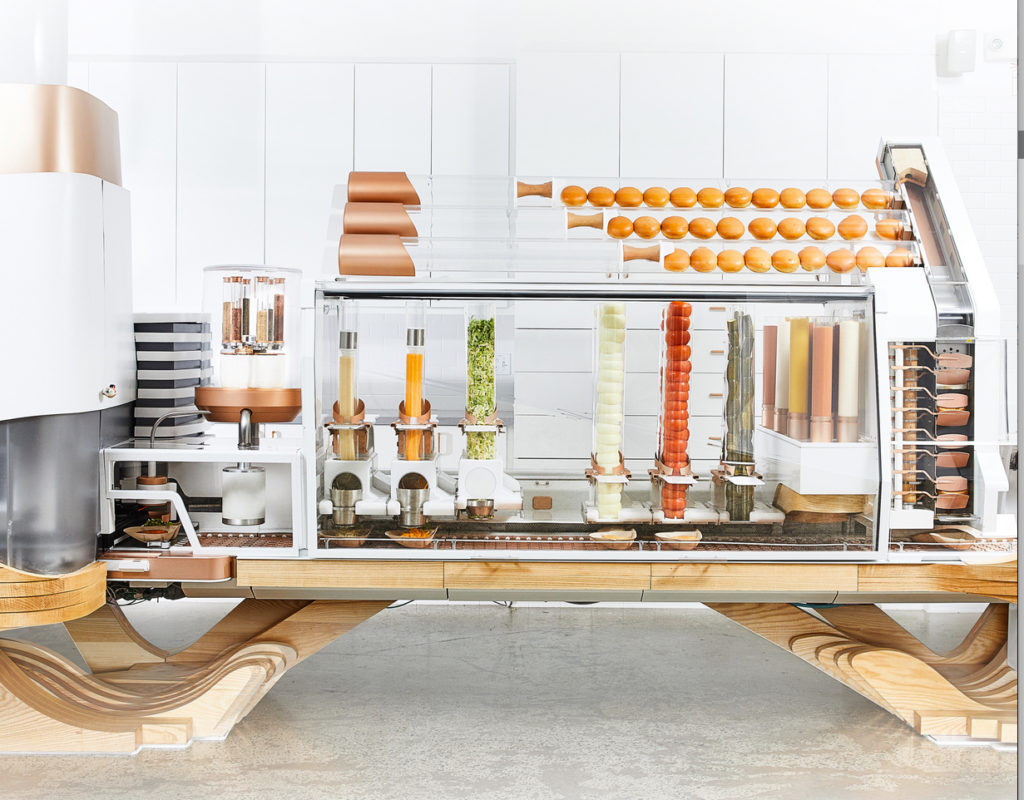 A report by Meticulous Research stated that the food robotics market is set to hit $3.1 billion by 2025 led by articulate robots and dairy manufacturers. Overall, food is becoming an increasing focus for institutional investors and family offices, according to executives at the Milken Institute Global Conference.

Chrissy Teigen’s Suit & Thai Productions and David Chang’s Majordomo Media have partnered with Hulu to create a variety of food shows. Lyft has teamed up with nonprofit Martha’s Table to launch its Grocery Access Program. And finally, Burger King is set to launch Impossible Whoppers nationwide by the end of this year.

The two have united as part of a multiyear deal with Hulu, for which they and their respective production companies Majordomo Media and Suit & Thai Productions will create a variety of food shows.

Lyft teamed up with nonprofit Martha’s Table to launch the Grocery Access Program. The pilot program will first run in Atlanta before expanding to other cities.

4. Burger King May Sell Plant-Based Burger Across US This Year – New York Times

Sales of the Impossible Whopper have gone so well that it will start testing it in additional markets with potential to expand sales nationally by the end of this year.

CEO Dirk Van de Put said CBD might not be a good fit for the company’s family brands, but the company could add it to other products or create new product lines.

6. Investors at Milken Focus on Food as the Public’s Eating Habits Change – Bloomberg

Food is becoming an increasing focus for institutional investors and family offices.

Funding was led by Finestere Ventures. The new cash will also go towards research and development.

Investors included Y Combinator and the CEO of Monde Nissin. Funding will be used to invest more in research and development, as well as adding on bioprocess engineers. Shiok expects to scale production in 2 to 3 years.

10. Does Your Food Label Guarantee Fair Farmworkers’ Rights? This One Does. – Civil Eats

Most labels address how food is grown. The Agricultural Justice Project also focuses on how the people behind the food are treated.

Google’s Wing Aviation is the first company to receive approval from the US Federal Aviation Administration to begin using drones as a commercial operation to deliver goods. It will launch a delivery trial later this year.

Inspired by plastic bag bans, jurisdictions have set their sights on a much bigger target: the to-go coffee cup.

An early proponent of electronic payments, the fast casual chain has rethought its policy.

15. 2018 Saw the Most Multistate Outbreaks of Foodborne Illness in More Than a Decade, CDC Says – The Washington Post