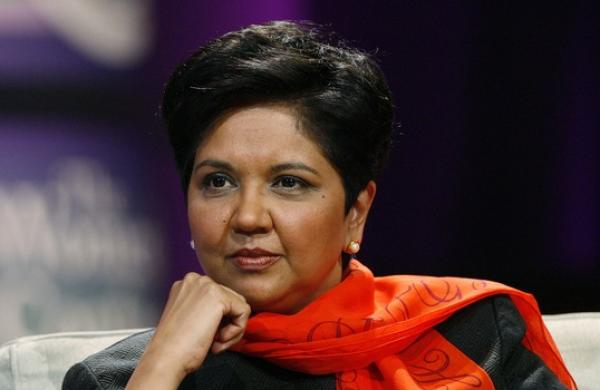 After 12 years of leading PepsiCo towards healthier brand strategy, CEO Indra Nooyi is stepping down from her role and being replaced by President Ramon Laguarta.

Albertsons has joined forces with Greycroft to launch a $50 million VC fund for grocery tech startups. As the demand for healthier and fresher food intersects with the desire of busy consumers for portion-sized grab-and-go items, the store perimeter is increasingly where it’s at for health-conscious snackers.

And finally, SoftBank has plans to pour $750 million into Zume, the maker of robot pizzas.

1. PepsiCo’s Nooyi to Exit, Thinning the Ranks of US Female CEOs – Bloomberg

President Ramon Laguarta will take over the role in October, but Nooyi will remain as PepsiCo’s chairwoman until early 2019.

The partnership has formed a $50m fund to invest in emerging companies and technologies in the grocery sector.

3. SoftBank in Talks to Invest Up to $750M in Zume, the Startup That Sells Robot-Made Pizza – Bloomberg

Zume owns a patent for delivery trucks capable of cooking food while it’s en route to customers. The investment shows SoftBank’s Vision Fund’s broader ambitions to attach itself to the food delivery businesses.

As the demand for healthier and fresher food intersects with the desire of busy consumers for portion-sized grab-and-go items, the store perimeter is increasingly where it’s at for health-conscious snackers.

Inari has raised $40m in Series B funding from Acre Venture Partners and Alexandria Venture Investments. The company will use this funding to accelerate the business and add to its team of more than 80 scientists, statisticians, engineers and advisors.

JD Daojia delivers goods from local supermarkets and other partners via a location-based smartphone app and has about 20m monthly active users.

Shareholders were set to vote on the acquisition today, but the deal was called off due to mounting opposition. For Albertsons, this marks yet another failed attempt at becoming a publicly traded company.

The Alibaba units to be merged include food delivery platform Ele.me and food and lifestyle services firm Koubei. Alibaba is looking to raise between $3b and $5b for the combined entity.

Recent regulatory filings suggest that Cafe X is slurping down up to $12m in a Seed-1 led by Jason Calacanis and Craft Ventures.

ICE officially announced the creation of Bakkt to help trade and convert the best known cryptocurrency to government-backed legal tender. Starbucks referred to itself as the flagship retailer involved in the project.

The plant-based seafood company announced the close of an $8.7m series A led by New Crop Capital with participation from PHW Group, Thrive Market and Fresh Direct. It plans to enter the retail market in the last quarter of 2018.

The company has raised $1m in seed funding from angel investors and The Yield Lab, as well as a $1.5m grant from the EU’s Horizons 2020 initiative. It is planning to launch next year by integrating its technology into automated weeders attached to tractors.

Chinova Bioworks creates a customizable natural preservative using chitosan extracted from mushrooms. Funding will be used to scale production and build its team.