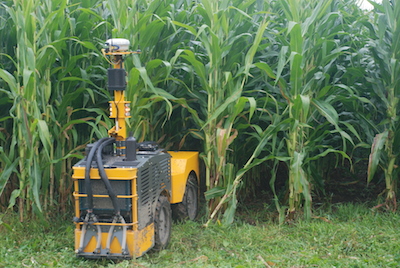 Guest post Brian Halweil, editor-in-chief of Edible East End, Edible Long Island and Edible Manhattan. This post is part of our Internet of Food Series. The views expressed are are solely those of the author and do not reflect the views of Food+Tech Connect.

Marilee Foster is not the kind of farmer who makes rash decisions. But when she recently heard about Rowbot, a lawn-mower sized autonomous machine that can fertilize the soil, mulch weeds and sow crops on 50 acres a day, she asked, “How much does it cost? And where can I get it?”

Foster, a vegetable grower whose family has been working the same piece on Long Island for nearly four centuries, isn’t particularly tech forward. This card-carrying Luddite still hand-draws her exquisite farmstand stands, plays a transistor radio in her greenhouse and isn’t on social media. So when she showed so much interest in Rowbot, I realized how disruptive the farm droids could be . Was she concerned about Rowbot replacing her? “Not at all. I would consider it a helper,” said Foster, who struggles to find willing–and well-trained–staff for nearly everything she needs help for on the farm.

For decades, farm machinery has targeted industrial-sized farmers, underpinning the “get big or get out” ag model of consolidation. Now, the miniaturization of farm machinery may be the agtech counter-trend that actually encourages smaller, more diverse farms.

“When we think about the future in ten years, we’re going to see smaller machines rather than big ones,” said Rowbot’s founder Kent Cavender-Bares in a recent conversation of This Week in Startups podcast. The 64-row corn planters that crawl across the Heartland today are so large and expensive that they only make sense for the most gargantuan, and debt-worthy, farmers. They’re so heavy they compact the soil. And they don’t work if you decide to plant a rye, sorghum or anything besides corn. In contrast, Rowbot is small enough to get between the rows of corn, dropping fertilizer in microdoses, when the crop needs it. Much less fertilizer gets wasted and runs off the field to contaminate the water supply. These are things a big tractor simply cannot do. “Let’s say we just wanted to mix corn and soybeans on the same field. Today you can’t do that easily at scale.” 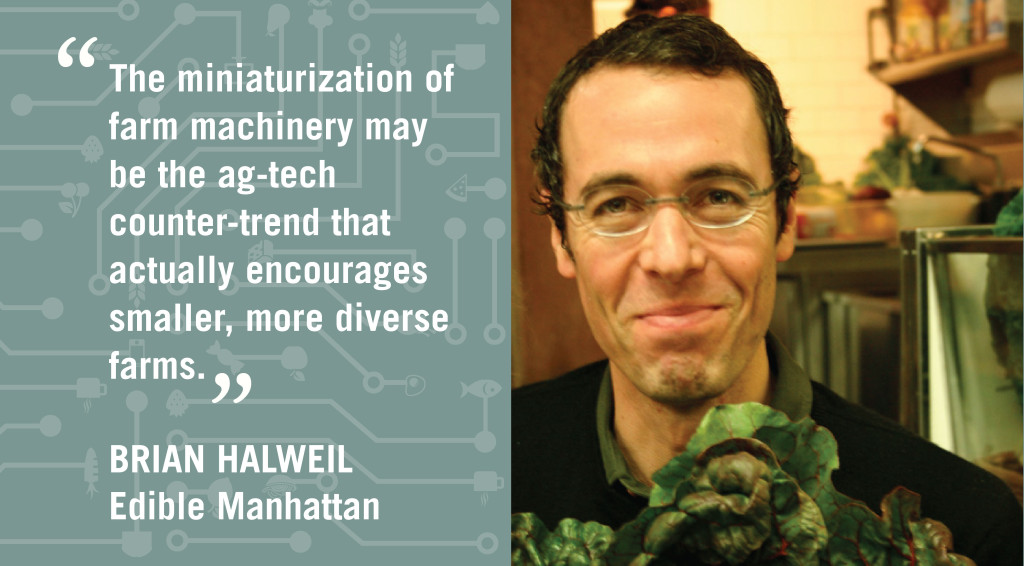 By making it easier to take care of a diverse landscape, the Rowbot actually allows the landscape to be resettled with a different type of farm. Small machines can get to spots on a field that farmers sitting in the cabs of big vehicles have struggled to tend well–ecological niches like the understory of a bean plant, in between two rows of corn, between layers of grape leaves.

When I recently spoke to Paul Hoff, COO of Agribotix, a drone-maker and drone analytics platform based in Boulder, CO, he confirmed that the majority of their customers are smaller farms. Hoff said the plummeting costs of drone components, like the near-infrared and thermal sensors drones use to “see” how plants are doing, as well as easy access to software used to analyse drone data, are the big reasons for wide use among smaller farms, whether in Poland, China or Egypt. Agribotix is used in 35 countries, on at least 42 different crops. In fact, Hoff suggested the benefits are greatest on complicated, diverse farms; not vast monocultures. Where labor is short, a surveying flight by a drone can help optimize when a vineyard decides to harvest its grapes, or a vegetable grower decides to check her eggplant for potato beetles.

The downsizing isn’t just about the hardware, but also the business model and outlay for the farmer. Rowbot doesn’t sell its machines but instead leases them. “You heard it hear first: RAAS, or Robots as a service,” said This Week in Startups host Jason Caalcanis, modifying the popular (and lucrative) acronym for Software as a Service or SAAS.

And while the incredible shrinking machine may be trite metaphor to a techie used to the faster, cheaper, smaller trends defined by Moore’s law, the notion of smaller machines is radical for the farm space. And yet the vast majority of the farms on the planet remain relatively small, particularly in poorer nations. A few years ago, when my colleague Danielle Nierenberg and I surveyed those technologies that are most effective at reducing hunger and poverty, for the Bill and Melinda Gates Foundation, our Gates colleagues repeatedly asked about answers to weed control, harvesting and other labor-intensive tasks on small African and South Asian farms. They knew that even in poorer nations, farm labor is not always available, as people are flocking to cities in increasing numbers.

Which brings us to HelloTractor. Calling itself the Uber of Farm Machinery, this startup based in Washington, DC and Nairobi, Kenya, allows farmers to request farm machinery, just as you might “hail” a car with Uber. HelloTractor’s delivery system is tied to its own small, smart tractors, which monitor usage and location for the security of the owner. Owners can help offset the cost of their purchase by renting it out. And because labor shortages on farms can lead to poor harvests and lost income, the wider availability of these size-appropriate machines can help whole communities grow.

Rent to Own Zambia takes this idea one step further allowing small-scale entrepreneurs in rural Zambia to “rent one water pump, one refrigerator and one hammermill at a time.” The platform isn’t just for farm implements, but the concept remains the same: targetted use of machinery to help humans boost production and income. According to an investor in Rent to Own, the company is just beginning to spread, but there is demand across Africa and a clear need for the same sort of machine “helpers” that my neighbor Marilee was so excited about. I think off the farmers in my community who envy a neighbor’s compost spreader or grain mill or legion of budding apprentices. And the farms that either fail, or never get started, because they don’t work as a one-man, or one-woman, operation. In this context, being able to call on Rowbot or HelloTractor, might make the difference between farm survival and farm extinction.

Companies are rolling out small machine products seemingly every week. I just came across BeanIoT, a sensor the size and shape of a bean developed by Cambridgeshire-based RFMOD that can be added to silos or other grain storage to monitor humidity, temperature and spoilage. And Infratab is developing active RFID labels that record freshness data points every 30 seconds and can be put on food packages–or even individual fruits, vegetables or groceries–to indicate if the foods have exceeded certain temperature or humidity thresholds that would compromise quality and safety. The soil-based sensor company CropX has just raised $10 million on the notion that its “internet of the soil” tool will save farmers time and money. These don’t have moving parts like what we think of as robots or machines, but they do “help” farmers in the same way a Rowbot or Agribotix drone will.

Yes, big machines may have allowed a single person to farm miles of land. But they also created farms low on diversity. Small machines could not only help large farms to become more diverse and ecologically sound, they can be a huge help to small, diversely planted farms that suffer from too little machine solutions to help them.

In his classic description of rural decline, The Unsettling of America, Wendell Berry recounted the process by which a declining number of very large farmers manage most of the American farmscape. A re-settling is the only antidote. And the rise of small farm machines might actually encourage it. 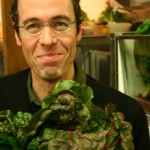 Brian Halweil is the editor-in-chief of Edible East End, Edible Long Island, Edible Manhattan and Edible Brooklyn and a frequent writer on ag-tech issues. He is part of the team behind Food Loves Tech, an expo on the technology transforming our food chain this June in New York City.