Frozen Food 3.0: The Future Of The Freezer Aisle 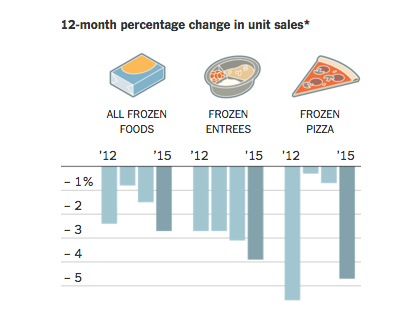 Image via The New York Times

Several companies started marketing single-serve frozen dinners after World War II, but it was the Swanson-brand “TV Dinner” that helped turn them into a staple in most suburban homes. Over the past decade or so, however, concerns about health, quality and taste—as well as an overall increased rejection of processed foods—have contributed to an erosion of market share (see graph above). But like many food trends, is it possible that consumers have been “throwing out the baby with the bathwater?”

Frozen foods in general have been shown to have a variety of previously overlooked benefits. A series of studies conducted recently by University of California at Davis have found that the nutritional value of frozen fruits and vegetables are generally equal to—and in some cases better than—their fresh counterparts. For example, frozen peas have more beta-carotene than the fresh variety and frozen broccoli has more vitamin A, vitamin B2, vitamin C and folic acid than fresh. Due to the natural state of stasis that freezing induces, frozen fruits and veggies don’t need preservatives to keep them looking and tasting great.

However, the freezing process certainly does not guarantee a more nutritional meal, and the prepared meal sector has been working towards remedying the disparity for years. If the “Hungry Man TV Dinner” was frozen meal Version 1.0, then 2.0 was Amy’s Kitchen. When Amy’s emerged in the late 1980’s, it was the first “better for you” vegetarian frozen meal option made with all organic ingredients. Amy’s stood out as a pioneer of health-conscious frozen foods. For many, Amy’s is still considered a good option, but “Frozen Food 3.0” is starting to give even the most discriminating consumers a reason to reconsider using their freezer for something other than ice cubes and frozen desserts.

Unlike most frozen foods, which are prepared in a factory and sold in grocery stores around the world, Veestro, for example, prepares its 100% plant-based, organic gourmet meals in a commissary kitchen based in southern California and then ships directly to your home anywhere in the US. Another frozen food pioneer, Luvo, limits its meals to no more than 500 milligrams of salt, with only two of them exceeding a single teaspoon of sugar. Luvo is also experimenting with compostable bags and trays and the use of organic rice from small-scale farmers.

When done right, pre-packaged dinners can offer a variety of benefits that can be difficult to find in other home cooked or restaurant take-out meals. For many working people, couples and families, convenience is paramount; after a long day of work, they simply don’t always have time to pull together a delicious and nutritious meal. And not only are these meals nutritionist approved but they are also portion controlled – with one meal equaling one serving size, and most sizing up at fewer than 500 calories per meal.

About the Author
http://realcertified.org
Lawrence Williams is an entrepreneur who is passionate about technology, food and health. He is the Chairman of the United States Healthful Food Council, which manages the REAL Certified nutrition and sustainability food and foodservice certification program. He has dedicated his career to developing public-private partnership solutions to some of the world’s most vexing problems. Most recently, Lawrence helped Elon Musk and SpaceX collaborate with NASA to develop a domestic commercial crew and cargo program to replace the Space Shuttle. Prior to SpaceX, he was the lead for wireless pioneer Craig McCaw and Bill Gates’ Teledesic in negotiating the radio frequency access to make broadband access ubiquitous through the use of low-Earth orbiting satellites.
Previous Next
Amy's Kitchen, food innovation, frozen food, processed foods, TV Dinner, Veestro