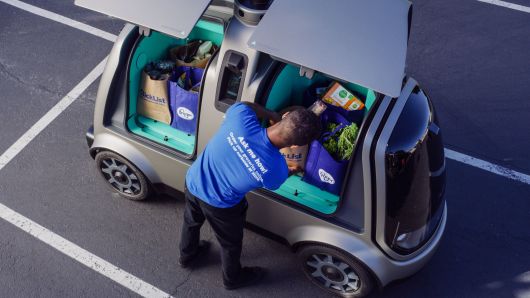 The year’s largest global food M&A deal was made by Conagra’s $10.9 billion acquisition of Pinnacle Foods. The combined companies now make up the fifth-largest packaged foods giant in the US. In other CPG news, Vita Coco acquired Runa for an undisclosed sum. The FDA has approved CBD-based drug Epidiolex, opening the floodgates for big pharma companies to enter the cannabis space.

Kroger has partnered with autonomous car company Nuro to test driverless cars for grocery delivery. Amazon has acquired PillPack for just under $1 billion in its first foray into healthcare.

Epidiolex is made using cannabidiol, known as CBD, but doesn’t contain THC. It will be used to treat rare and severe forms of epilepsy.

Both Vita Coco and Runa will exist as independent companies under AMI after the acquisition is complete. Financial terms were not disclosed.

4. Behind Conagra’s $10.9B Deal for Pinnacle Foods: Why the Frozen Food Aisle Is Suddenly So Hot – Forbes

The year’s largest global food M&A deal gives renewed hope to both the frozen food aisle and the major packaged foods companies upended by upstart brands. The acquisition will make the combined company the fifth-largest packaged foods giant in the US.

Epidiolex is made using cannabidiol, known as CBD, but doesn’t contain THC. It will be used to treat rare and severe forms of epilepsy.

5. Amazon Buys PillPack, an Online Pharmacy, for Just Under $1B – TechCrunch

The move signals how heated the e-health market is becoming, and how Amazon views it as a key frontier in its bid to be the go-to place for anything a consumer might want or need in the area of healthcare.

These provisions include funding for a new USDA pilot project that will incentivize farmers, through payments, to adopt agricultural practices aimed at improving soil health and sequestering organic soil carbon.

The Series D round is led by Cox Enterprises Inc, with participation from Catalyst Investors, WP Global Partners and NGEN Partners. The farm plans to expand a greenhouse network that grows produce close to metropolitan areas, reducing shipping costs.

Lagunitas Brewing Company, which has a history with marijuana and is now wholly owned by Heineken International, announced the launch of two psychedelic sparkling water products.

9. Ceres Imaging Gets $25M to Intelligently Scan Crops from Above – TechCrunch

The round was led by Insight Venture Partners with participation from Romulus Capital.  The company will continue to expand their efforts.

10. China-US Trade Tariffs May Cut US Farm Exports by 40% – Bloomberg

US soybean, cotton, beef and cereal shipments to China may each drop by 50% in value. The price of imported soybeans may rise 5.9% and imported cotton prices may increase 7.5%.

The online food delivery platform is aiming for a $60b valuation with the IPO, which is likely to list in October.

12. Zomato in Talks to Raise $400M in Fresh Funding at $2B Valuation – Deal Street Asia

Funding will largely come from existing investors Ant Financial and Temasek as well as Alibaba Group. The development comes as competitor Swiggy on Thursday announced closing $210m, the largest by a foodtech startup.

13. Amazon Will Finish Its Nationwide Rollout of Prime Member Discounts for Whole Foods This Week – TechCrunch

By the middle of this week, all Amazon Prime members will have access to discounts at Whole Foods Market stores across the US — finishing a nationwide rollout that’s part of the retailer’s master plan to dominate physical and virtual commerce in America.

Ten of the world’s biggest companies are building a blockchain to remake how the industry tracks food worldwide. The so-called Food Trust aims to improve recalls and reduce the time consumers are at risk of illness.

The round was led by OMERS Ventures and JPMorgan Chase. The startup will use funds to develop the next iteration of its operating system as well as new kinds of payment solutions.

16. Trump Wants to Move Food Stamps to a New Agency. That Could Make the Program Easier to Overhaul – The Washington Post

Thursday’s proposal would move the $70b SNAP program out of the Department of Agriculture and into a rebranded Department of Health and Human Services.