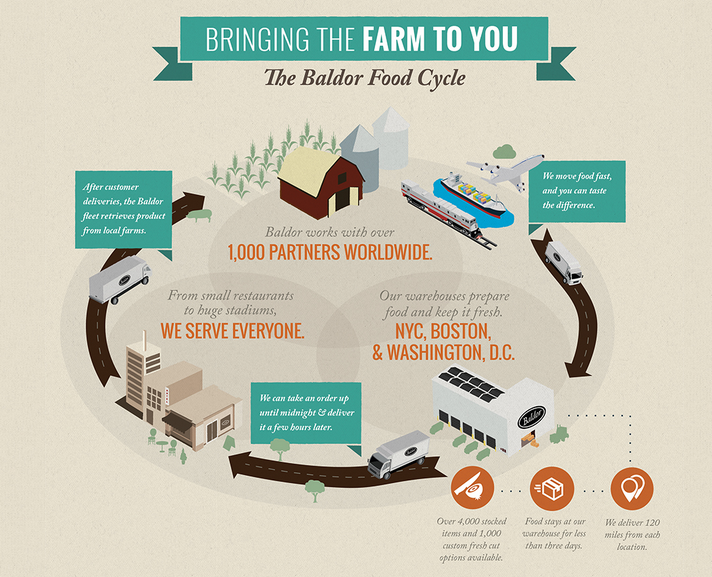 Guest post by TJ Murphy, CEO of Baldor. The views expressed here are solely those of the author and do not reflect the views of Food+Tech Connect.

Let me preface this article by stating that we at Baldor do not believe that the entire food system is broken. In fact, as a major distributor, we often work within a system that has harnessed a historic level of efficiency to feed an unprecedented number of people. That system is Big Ag.

Does this mean that we are supporters of the status quo?  Of course not—it means that we believe in the power of infrastructure to drive the food system. Our goal is to deploy operational expertise and industry-tested best practices to bring new levels of efficiency to the sustainable food movement. In order to achieve this goal, we are developing a cutting edge new e-commerce website and rolling out new initiatives to galvanize our local program and minimize food waste.

With over two hundred trucks on the road and warehouses in New York, Washington D.C. and Boston, Baldor is uniquely positioned to connect regional food systems on the East Coast. Because our truck routes extend from Portland, ME all the way to Norfolk, VA, we are able to backhaul product from our delivery areas, increasing our ability to support local farms and minimizing our carbon footprint in the process.  As a result of our diverse customer base, we have also been able to create closed circuit systems between local farmers and the local manufacturers we serve.  These 360 degree partnerships help strengthen alternative economies and create healthier, more environmentally sound systems of food production.

We are enacting a number of initiatives that will help us offer healthier, safer food and minimize waste. For example, we are leveraging our food processing unit “Fresh Cuts” to create kitchen-ready ingredients from local farm produce.  These processed products will create opportunities for institutional buyers and major food service providers to significantly support our local farm program.

Fresh Cuts is also on the vanguard in our effort to minimize food waste. In late March, we collaborated with Dan Barber on his WastED dinner series by delivering by-product materials from our food processing facility.  His chefs then transformed these ingredients into a gourmet menu, creating a delicious argument against our tendency to dispose of usable food. We are currently in the process of implementing a disposal system that breaks down organic food waste into water.  We also donate over one million pounds of food per year to the Food Bank for New York City and City Harvest.

Much has been written on the ways in which commercial agriculture and corporate food processors have let America down. Far less has been said about the powerful systems of production and distribution that have allowed them to dominate the market. We believe that the only way for the sustainable food movement to migrate from the margins of the industry is to infiltrate the existing systems and use them for good.

Internet of Food is an editorial series exploring how we might use technology, new business models and design to guarantee healthy, safe and sufficient food for everyone. Join the conversation between February 17 and April 2. Share your ideas in the comments, on Twitter using#internetoffood, Facebook or LinkedIn. 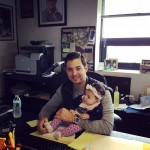 The specialty food business is in TJ Murphy’s blood.  As the grandson of Nina and Andy Balducci, owners of the iconic Greenwich Village retail store Balducci’s, he was introduced to the culinary world at an early age. He began his career at Baldor during high school under his father, former CEO and founder Kevin Murphy.  Since then, he has worked his way through every department at the company beginning as a picker and receiver in the warehouse.

TJ was appointed CEO in 2013 after Kevin Murphy’s death.  In this role, he has led Baldor with both a reverence for the company’s past and a keen eye towards the future.  He shares his father’s passion for sourcing and maintains Baldor’s legacy for buying the best from the best. He is also a believer in the power of data and has implemented sophisticated analytics in order to guide the company.

In 2014, he spearheaded a revamp of the website that will put the company on the vanguard of technological advances in the industry. He is also committed to expanding regional sourcing efforts and leveraging Baldor’s logistical power to build a local program that is synonymous with the company’s reputation for service and quality. Under TJ’s direction, Baldor’s Boston location has expanded into a 13,000 square foot warehouse in order to accommodate growth in New England. Recently, he returned to his family’s roots by assuming management of the produce division at international retail chain Eataly. TJ lives with his wife Christine and daughter Nina Marie. They enjoy cooking together and keeping Balducci traditions alive through their culinary explorations.