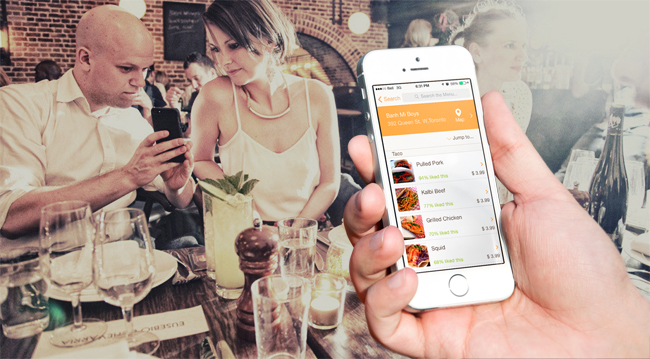 This is a big week for FTC. On Tuesday we launched our first two online food business courses, Food Startup Branding 101 and Fundamentals of User Research.

Last March, Tehsin Bhayani flew to NYC to participate in our Food Startup Branding 101 Bootcamp. Along with his co-founders at Serind Labs, a Toronto-based design and development agency, he had just built HotSauce, a restaurant dish discovery app that aggregates over 350,000 restaurant reviews from sites like Yelp, Foursquare and Google Places. The app was a pet project, and he was joining us to figure out how to position it when it officially launched.

Taking Food Startup Branding 101 helped Tehsin understand his customers on a much deeper level, which enabled him to make critical business model and marketing decisions. Since the course, HotSauce has also decided to close the dining loop and tackle mobile payments. Learn more about its innovative take on that and much more in our interview with Tehsin below, which has been edited for brevity and clarity.

Fundamentals of User Research and Food Startup Branding 101 are now available online. Check them out and join our learning community if you want to take your brand to the next level.

Nina Meijers: Can you tell us a little bit more about your background?

Tehsin Bhayani: I used to be a head of product at an agency here in Toronto, and I quit my job about a year and a half ago and decided to start building mobile apps. I code as well as focus on the UI and UX aspect of a product.

NM: Why did you sign up for Food Startup Branding 101, and what skills were you hoping to gain?

TB: I joined because we’re (Serid Labs) a bunch of programmers. Both of my co-founders are technical and so am I. I can design a really great interface and create a good product, but we have no clue how to actually tell people that we exist. Just getting these[our initial] 1,500 users, we wouldn’t have been able to do that without some level of basic branding on our website, an understanding of how to put our timeline together and what kind of messaging we want to put forward in front of people.

NM: What has feedback has been like for HotSauce since you launched?

TB: It’s actually pretty clear. We have about 1,050 users, which isn’t a lot, but we’ve not actually gone out and done any real marketing yet. Out of those people who are registered users, 350 of them are active. These are 350 people that actively use the app every week.

And we talked to them; we did the short-form and the long-form interviews, and basically the consistent feedback has been: “Hey, I love this app. It’s great. I use it all the time. But I hate the fact that you guys don’t have menus for a lot of the restaurants.” This is what we heard from the 600 people we interviewed. The 350 people who actively use the app seem to have the menu coverage they need, so they’re loving it.

NM: What is your business model and how has it changed since your launch?

TB: Our business model is to finish the entire dining experience by letting people pay with their phones. We believe it’s about the entire experience. It’s such a slow process, and it needs to be changed. HotSauce will do this by simply allowing people to pay with their apps. This feature is not available in the app just yet. It’s what we’re working on right now, and we should have it up and running within the next 2 months.

NM: So you will become a payment processor?

TB: Yes. I know it sounds like two very different kinds of businesses, but they’re actually really complimentary. It’s all about creating a really good dining experience. This thought evolved when I was taking the Food Startup Branding bootcamp; it was all about “What is it that we’re actually doing for the person?”

What we’re really doing is we’re making a better dining experience for everyone, and part of that is making sure you order a good dish and don’t order something that people have already said they hate, and that you’re also able to conveniently pay for that meal.

NM: How do you get buy-in from restaurants? What is the relationship like between you as a payment processor and restaurants?

TB: The first thought was to have our own POS system. But we’re talking to restaurants here in Toronto, and sometimes they’ll have three or four different iPads that they have to punch into, and that’s kind of ridiculous. So what we realized is that there has to be a better way, and we’re actually working on a technology that integrates directly into the POS. What that means is as soon as you walk into the restaurant, HotSauce is able to connect to their POS and create that table directly into the POS. This way they don’t have to learn any other new system; they’re using their existing MICROS or Heartland or any one of the top dozen POS systems.

NM: What were your major takeaways, and how have you applied them to HotSauce since the course?

TB: [My core takeaway] was how to get the user feedback. That was probably the most important part. Now when we have to get feedback from users and actually get information out of them, I go back through the notes and I’m like, ‘Okay, this is like a godsend. I know how to do this now.’ We [practiced how to do a] short form interview and a long form interview [in the course], what to listen in for, how to take notes, [and] that was really, really useful. That is the main thing that we actively use.

And then the second [takeaway] was just positioning for the brand, the voice of the brand. We’re still kind of struggling with that, but we’re a lot further ahead than we were before. HotSauce was supposed to be called Configio, which obviously isn’t too great of a name.

NM: But you had changed it to HotSauce before the course?

TB: It was sort of in debate. But as soon as I finished the class, I was like, “Yeah, this needs a proper voice. HotSauce fits that brand.”

NM: What big challenges do you face as an emerging food tech startup, and how do you think having a cohesive brand strategy, or working towards that, is helping you tackle that?

TB: The biggest challenge for our mobile app – especially being self-funded – is distribution. We can’t afford to have sponsors, or spend thousands of dollars on sponsored ads. So mobile distribution is a big challenge for us.

But having a good sense of our brand now, we know what we stand for, and we know how to communicate about ourselves over Twitter and other social media channels. This really makes the path a lot easier, because now we know who we are, we know why we exist and we know the kind of messaging that we want to communicate.

We worked on a small campaign with a food festival in Toronto, and over the course of the weekend we got 200 users. That was the only piece of marketing we’ve ever done. And of those users, at least 30 percent are actively using our app now every week.

NM: Are there any other exciting features or partnerships or news on the horizon for HotSauce?

TB: We’re working on a feature that will let users input their allergies and diet plan, and it will automatically take that into account and tell them what dishes on the menu they can and cannot have.

NM: How are you going to address the user feedback you’ve gotten with the next version of HotSauce?

TB: We now have about 50 percent coverage in New York and Toronto. To get more menus, we’ve built an engine that can go through any restaurant’s website, and as long as they have their menu on there, we can scrape that menu data, format it and use that on the app. So that’s going to give us about between 80 to 85 precent coverage for Toronto, New York and San Francisco, which are the three cities we’re focusing on now.

About the Author
Nina Meijers heads up editorial and creative at Food+Tech Connect. Connect with her on Twitter or LinkedIn.
Previous Next