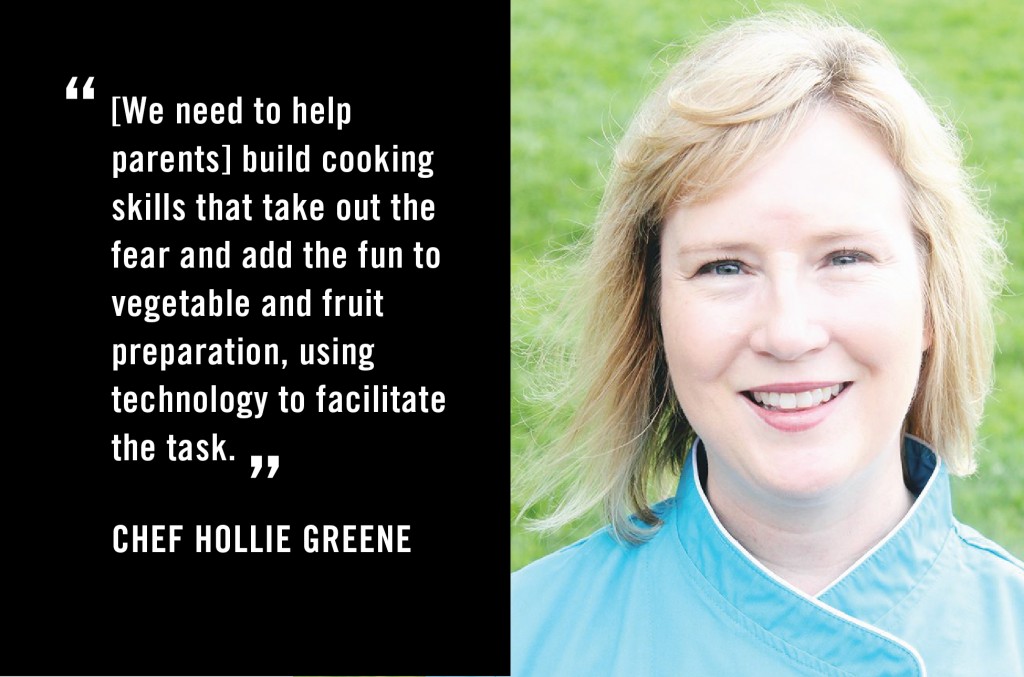 Guest post by Chef Hollie Greene of JoyFoodly. The views expressed here are solely those of the author and do not reflect the views of Food+Tech Connect.

What if parents knew how to build their families’ dinner plates around vegetables and fruits, first? And were able to learn how to cook those vegetables quickly and easily online? The debate rages on around whether parents are up to the challenge. I say, resoundingly: Yes! How? By building cooking skills that take out the fear and add the fun to vegetable and fruit preparation, using technology to facilitate the task.

While the produce section at local supermarkets is colorful and engaging and farmers market produce is especially sexy this time of year, national data tells us what’s actually being consumed on American families’ dinner plates is unequivocally not vegetables and fruits.

Despite myriad studies pointing out that a diet rich in fruits and vegetables can help prevent cancer and chronic disease, only 5 percent of Americans younger than 50 are consuming the recommended amounts of produce—as Michael Moss pointed out in his New York Times article on the challenges of marketing produce. There is a huge disconnect between the best-intentioned dietary recommendations and what Americans are really eating: soda, chips and fast food. Our goal at JoyFoodly is to narrow this chasm, by offering parents simple techniques that build cooking confidence and motivation to enjoy trying and eating fruits and vegetables.

The food industry sets up parents as the responsible parties when it comes to establishing eating habits in children. But for parents who were never taught to cook and are competing with irresistible salty, sweet “kid” food,” that’s full of sodium, fat, and sugar, that proves difficult. The industry is asking a parent to run a marathon without shoes. And sadly, too many parents collapse before the finish line when it comes to getting a healthy dinner on the table. Is this a question of will or skill for parents?

As a culinary educator who has taught and engaged with thousands of parents, I would argue that it’s the latter. Most parents begin with tons of will and the best intentions to create good eaters.  At some point, they just give up—whether because of busy family schedules, or finicky eaters, shared meals become a relic. But as Mark Bittman points out in his New York Times op-ed, “The core problem is that cooking is defined as work, and fast food is both a pleasure and a crutch.”

Given the rising tide of obesity, diabetes, and other diet-related diseases, creating a generation of good eaters is an imperative. Giving up on good food isn’t an option, because the cost is much too great. Teaching people crucial life skills, like cooking, has the power and potential to profoundly re-shape our nation’s health.

I always tell parents of young children that potty training is non-negotiable, and I look at teaching kids about vegetables and fruits in the same light. That learning should start at home, with their overstressed, time strapped and truly doing-their-best parents. If marketers can create a potty training Elmo, it’s time we leveraged technology to make solutions to the cooking conundrum simpler, more manageable, and affordable.

How can we make that family-eating marathon achievable for parents? Expecting everyone to take in-person cooking classes or learning from entertaining cooking shows just isn’t realistic. That’s why we hedged our bets on the online platform. Parents can learn anytime – after the kids are in bed, before they wake up, and most importantly, alongside their kids by jumping into the kitchen with a smartphone or a tablet and asking their 7 year old to follow along.

Our goal in founding JoyFoodly in 2013 was to make learning how to cook vegetables and fruits not only pleasurable, but also economical, easy and readily accessible. For scale and ease of use, only a tech solution could convert this goal into a reality. As a chef, I have years of experience teaching thousands of kids and adults my proven methods to love cooking and eating produce in season. My Creative Director Michelle Venetucci-Harvey brought the design savvy. Collaborating with Julian Tescher, co-founder of WillCall, the prototype of our Joyful 12 online kitchen learning lab was born last fall at the San Francisco Food Hackathon. At the food and technology crossroads, we are providing solutions for the three areas where families struggle the most in converting their will into cooking chops in the kitchen—and eventually into their families’ diets:

1) The skills of how to buy, prep, and make fresh produce taste so good it knocks prepared foods off the shelf

2) The strategies to engage kids around it in a fun, cool, and tasty way

3) The platform to learn at their own pace, and exchange knowledge with other home cooks beyond the classroom materials

Hacking Dining is an online conversation exploring how we might use technology and design to hack a better future for dining. Join the conversation between June 2 – July 30, and share your ideas in the comments, on Twitter using #hackdining, Facebook, LinkedIn or Tumblr. 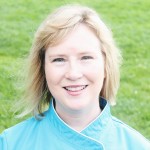 Chef Hollie Greene is passionate about bringing the joy of good food to the family table. In 2013, she founded JoyFoodly, a San Francisco-based company that helps families joyfully get more vegetables and fruits into their diets. Her newest venture is the  Joyful 12, a one-year online crash course in seasonal eating that teaches vegetable and fruit preparation skills missing in many families’ kitchens, and converting “yucks” into “yums.”

Chef Hollie is a graduate of the French Culinary Institute in New York City and has taught over 2,000 public school children in New York and California through her work with non-profit programs such as Wellness in the Schools and The Sylvia Center, and in partnership with Rachael Ray’s Yum-O!, Mayor Bloomberg’s Office and others. When she’s not creating recipes in the JoyFoodly kitchen, Hollie teaches and volunteers with national and Bay Area organizations including 18 Reasons, CUESA, Bay Leaf Kitchen, Y.U.M Chefs, and A Little Yumminess.