Elizabeth Meltz of Batali & Bastianich: What the $#@*! Is a Hackathon? 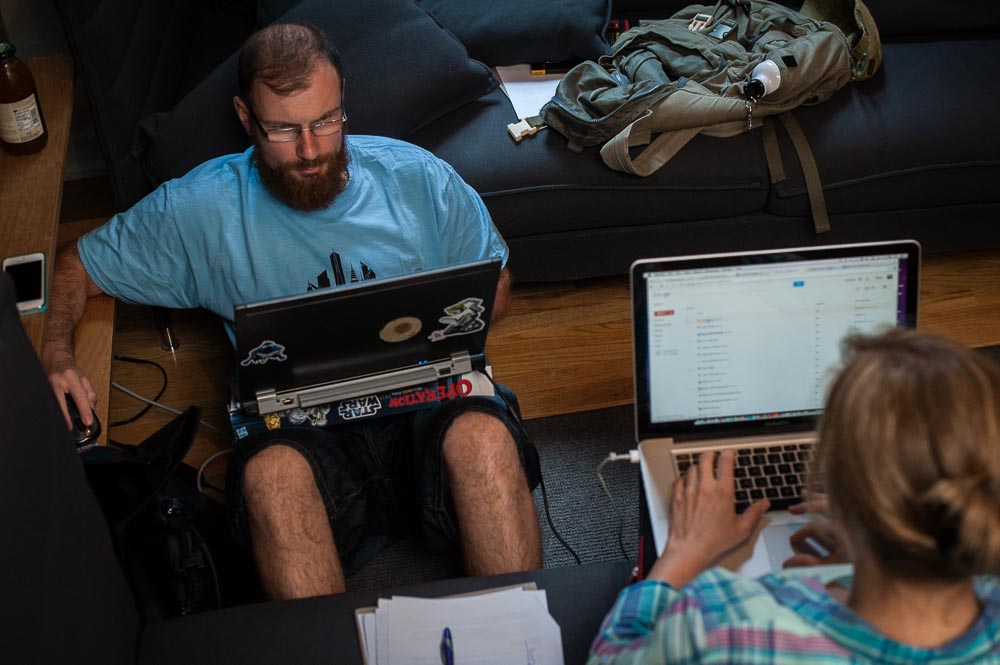 This weekend, I participated in a hackathon (a word that, until this weekend, I’d use with much trepidation because I knew that at any moment someone might ask me what the $#@! a hack is, and I’d be forced to admit that I really had no idea).

Now I know what a hackathon is; it is what you make of it.

More specifically, a hackathon is:

The Wikipedia definition of a hackathon reads:

“… An event in which computer programmers and others involved in software development, including graphic designers, interface designers and project managers, collaborate intensively onsoftware projects. Hackathons typically last between a day and a week. Some hackathons are intended simply for educational or social purposes, although in many cases the goal is to create usable software.”

I was pretty terrified, not knowing what it was and what to expect. I was pretty sure I was going to be thrown into a room full of technology wonks, bespectacled in Google Glass, looking at me like I was from outer space when I asked “what’s a reddit”? Instead, I counted only two pairs of Google Glass, and when I asked the Reddit question, I encountered a room full of warm smiles and giggles. And some very patient people willing to explain.

What shocked me more than anything, however, is how much human interaction people have at a hackathon! That although there were laptops open everywhere, there was more consensus building and sharing of opinion between virtual strangers than I have ever seen in my office where I have worked with some of the same people for nearly 8 years.

I recognize that my experience is somewhat unique. I had a particularly spectacular team – we were a small group, which at first I was bummed about as my challenge was awesome (credit goes to Mike Lee of Studio Industries who did most of the work), and I thought more people should want to hack it. But as the day wore on, I realized that a small group afforded me a few luxuries: 1) intimacy because even though they broke up into 3 smaller groups, they all aided each other and crossed pollinated, and 2) all 3 got to go to the finals. I didn’t have to eliminate anyone! So many thanks to my teams that made my experience particularly special.

All of this being said, I do recognize the pitfalls and shortcomings of Hackathons. And I’m not signing up for the dental hackathon someone told me is taking place next weekend. Food systems, for example, are an absurdly complicated issue that one can’t possible explain to strangers with no food background in the span of 24 hours. I can only imagine this makes certain topics frustrating for stakeholders (challenge presenters). I also imagine it can produce seemingly superficial solutions– and potentially winning hacks– that will never come to life.

I also realized very early on in the weekend that the event is, by nature, phenomenally ego-driven. I got the impression on the very first night that each person thinks he or she can solve the problem and that he or she can solve it better than anyone else can.

And this is why I think, in part, my experience was so positive and so special and why a Hackathon is what you make of it. I spent a lot of time with my group, I brought guests in to talk to them. My group was in the minority: they chose the least popular challenge, they interacted with me, listened to what I had to say, and they took constructive criticism in stride. All three of my teams did amazing work. All three of them did not come up with viable apps that are going to come to market tomorrow and make millions, though two of them could definitely come to fruition given some time. And the other one, in the ultimate spirit of a hackathon, amassed a ton of data and made it available to the public. I think you call that “open-source.”

I also learned a lot this weekend. A really neat outcome of this hackathon is that food people and designers and tech people all shared one space and had no choice but to learn something from each other. If they made the effort to connect. (Again, it’s what you make of it.) I’ve already decided to apply the design hack thinking I learned this weekend to a waste sorting problem we have on a project in Chicago. And my team now knows that the CDC estimates that roughly 50 million people get food borne illness every year, be still my beating heart.

But that’s not even the most radical outcome of this weekend… The craziest thing about the whole hackathon: I think I actually made some new friends.

Elizabeth Meltz is the force behind two crucial programs at Batali & Bastianich Hospitality Group: Food Safety and Sustainability. Supervising 16 restaurants in New York, Las Vegas and Los Angeles, Meltz oversees all food safety programs and maintains B&B’s status as a pioneer in the green restaurant world. She has written numerous HACCP plans (Hazard Analysis and Critical Control Point) and has initiated strict food allergy programs for all B&B restaurants. Outside of the restaurants, Meltz speaks and writes about food safety and sustainability and is an advisory member of the Mario Batali Foundation Board.