Why We Need to Hack the Farm Bill 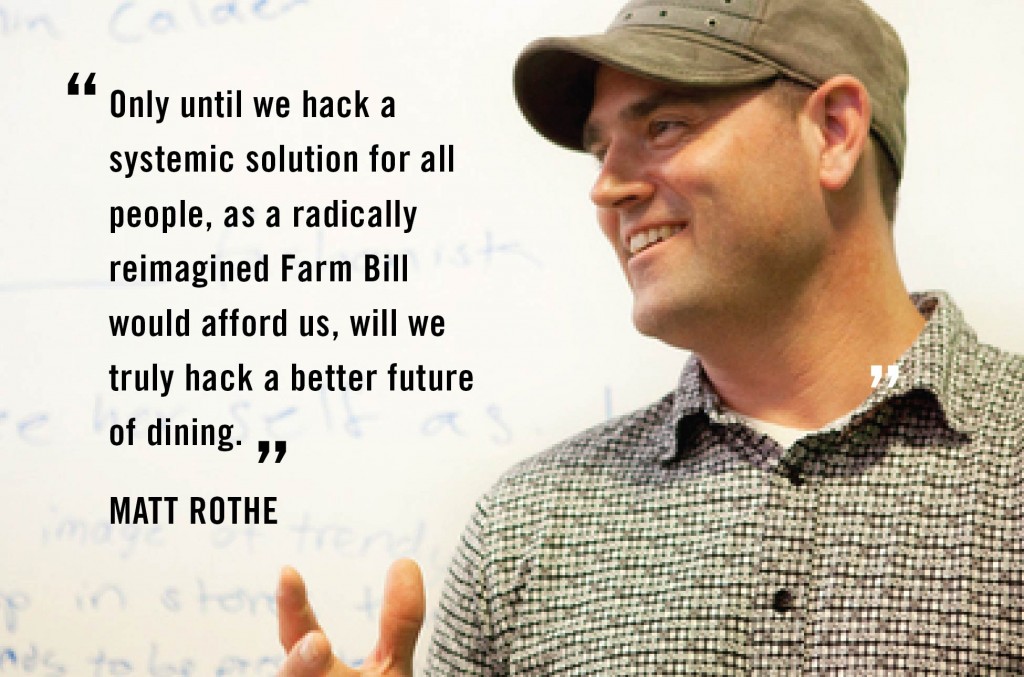 Guest post by Matte Rothe, co-founder, FEED Collaborative. The views expressed here are solely those of the author and do not reflect the views of Food+Tech Connect.

While many of us know that the food system is broken, too few of us actually understand the systemic underpinnings of why it’s broken—why, despite our best intentions to hack better solutions, most of our energy is spent either addressing symptoms of much bigger problems or the needs of only a privileged few.  If we are to have any hope of using information, technology and design to hack the future of dining in ways that can actually shift the existing paradigm, we first need to understand why people are dining the way they are today.  Indeed, we first need to understand the social, ecological and economic outcomes of our dining in the context of the Farm Bill.

In many ways, the current state of dining in the United States is best described by how we currently define our metrics of success. Consider this one, for example: obese children and adolescents with diabetes are ostensibly good for the short-term health of our economy. From the revenue generated in the cost of their associated healthcare to their consumption of technologically advanced, highly processed and heavily subsidized calories, obese young people are important contributors to our gross domestic product (GDP). In the long-term, the effects of obesity and diabetes will certainly have a negative impact on an individual’s lifetime contribution to GDP. However, considering the time value of money, the present value to GDP of an adolescent with diabetes could conceivably be greater than that of an adolescent without.

As absurd as this may sound, it demonstrates how our metrics of success can either mask or, worse, incentivize negative long-term social outcomes. To demonstrate a similar red herring of a commonly used metric of success in our food system, consider crop yield, a favored metric of those with considerable influence on the Farm Bill.  Through the use of artificial fertilizers, pesticides and plant genetics, the nominal productivity of our agriculture, as measured in crop yield, is as high as it’s ever been.  But, the fertility of our soils—their natural capacity to produce food—is actually declining as the result of excessive tillage, annual mono-cropping, and use of indiscriminate poisons.

Now, one might argue that such a tradeoff is warranted in the face of an increasing population and that with some degree of confidence a technological solution will eventually be found. But the reality is that our singular focus on maximizing yield and short-term profit has resulted in an agricultural system that is simultaneously producing the greatest abundance of calories in the history of our species and a generation of kids that may live shorter lives than their parents because of it.  Our food system and, by way of the Farm Bill which defines what we grow and eat through its metrics and programmatic incentives, is systematically destroying both our farmland and the prospects of our youngest generations.

If, therefore, we are to use information and technology to hack anything of real consequence to how and why people eat what they eat, we need to hack a Farm Bill that (a) values food as a means of achieving not only health, but economic empowerment and equality, that (b) incentivizes and subsidizes farming practices that build, rather than destroy soil fertility and that, for good measure, (c) develops rural economies through support of family farmers and the people they employ. Surely we can hack solutions that result in these outcomes for some people, but only until we hack a systemic solution for all people, as a radically reimagined Farm Bill would afford us, will we truly hack a better future of dining. 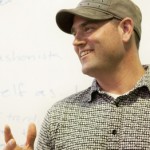 “When it comes to the food system, I’m like Johnny Cash:  I’ve been everywhere, man.  I was raised on a conventional corn farm in Colorado, and when I needed a little more cash than my dad could pay me, I took a job as a picker in what was then the world’s largest beef slaughter plant.  I’ve worked as a dishwasher in three states, have earned cash under the table as a cook, and have spent months working in various locations—most of them malodorous and uncomfortable—alongside non-English speaking migrant farm workers.  Before becoming a supply chain expert, entrepreneur, quasi food scientist, armchair food economist, urban micro-farmer, sustainable food guru, and food system d.tinkerer, I worked in fast food to support a slow food habit of fly-fishing.”

Matt earned a BA in Environmental Earth Science from Dartmouth College and an MBA from the Graduate School of Business at Stanford.  When not dusting his diplomas, he can be found with a full belly at the Stanford Community Farm.  For more information, check out his personal website.