Infographic of the Week: Companies Against GMO Labeling Revealed

While over 60 countries around the world have banned genetically modified organisms (GMOs) or require their labeling, the United States does not. In fact, only recently has the debate over GMOs heated up stateside: California’s labeling law Prop 37 was narrowly defeated last year; Connecticut passed a labeling bill, but with the stipulation that 3 other states do as well; Vermont will examine a similar bill in January 2014; And the city of Los Angeles is considering a ban on GMO cultivation, sale and distribution, which would make it the largest GMO-free area in the US, to name a few examples.

But, if passed on November 5th, Proposition I-522, a citizen’s initiative in Washington, could make it the first state to mandate clear labeling of genetically engineered ingredients on food packaging. Organizations in support of the proposition have spent roughly $6 million in hopes of getting the bill passed. Agribusiness and Big Food have put up $17 million to defeat it, making it the most expensive initiative campaign in Washington’s history.

The infographic below, created by The Cornucopia Institute, details the financial expenditures of the corporations and organizations that are supporting and opposing I-522. The information comes via the Grocery Manufacturers Association (GMA), which recently released the names of new donors after Washington’s Attorney General filed a lawsuit demanding that it disclose the names of secret donors. And there are some surprises on the opposition side. The parent companies of organic brands like Green & Black – owned by Mondelez Global – and Cascadian Organic – owned by General Mills – have lobbied against mandatory labeling. Stonyfield, Annie’s and Nature’s Path are a few of the leading supporters of I-522. 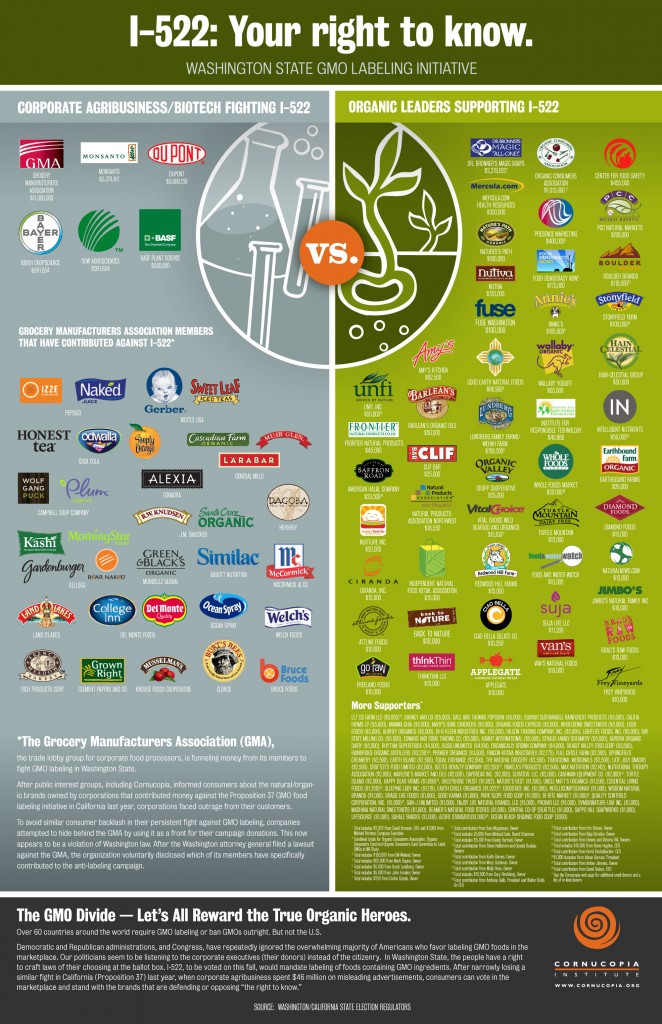